Last season the organisers decided to switch things up and move away from the traditional Cauberg finish in a hope to liven up the racing. Their plan worked rather well and with what was the year of the long attack, we saw the winning move get away with 35km to go. A group of 7 riders with the majority of stronger teams represented worked well enough to ensure it would be they who were fighting out for the title. On the last climb of the day Kwiatkowski and Gilbert attacked, managing to shake off their break compatriots, before they worked well together until the final sprint to the line. The Belgian champion was too strong but the result was fairly easy in the end as the Sky rider seemed to open up his sprint too early. 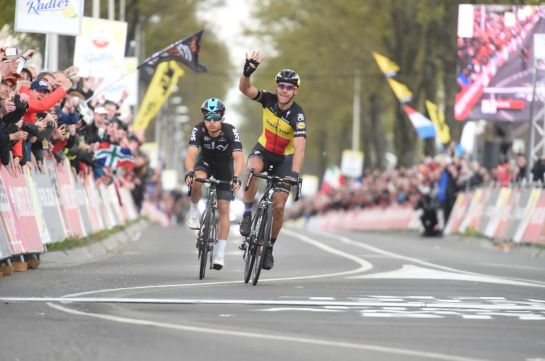 I guess you can take the Cauberg out as the final climb but that doesn’t stop Gilbert from winning Amstel!

Behind, Albasini took home third place with a comfortable sprint win ahead of the remnants of the breakaway.

Will we see a similarly attacking race this year? Let’s have a look at what is in store for the riders.

An almost identical route to last year but the organisers have made one slight change to hopefully keep the excitement right until the end of the day.

As was the case last season, the opening 200km will act mainly to sap the strength of the riders legs before the racing really begins in the last 60kms. The most critical part of the day will be the 4 climbs the riders tackle in quick succession; Kruisberg, Eyserbosweg, Fromberg and Keutenberg.

The Kruisberg is a reasonably long climb for the area at a total distance of 1.8km with an average of 4.8%. Not overly steep, it should be tackled at a pretty fast pace but it does beg for the puncheurs in the race to attack. Almost immediately after cresting the Kruisberg the riders descend and being climbing the Eyserbosweg.

The climb (900m at 9.3%) has a sting in the tail with its steepest gradients coming in the final few hundred metres. The perfect place for a strong rider to attack and get a gap.

A slightly longer descent follows before the Fromberg (1.6km at 3.6%), then rinse and repeat with another section of downhill which precedes the climb of the Keutenberg.

Given that all these climbs are traversed over a roughly 10km stretch, it should theoretically see the race explode like it did last year. It will then be a case of: Who’s ahead and who’s left to chase?

The race isn’t over though as the riders will still have to face the famous Cauberg (800m at 6.5%) and the Geulhemmerberg (1.2km at 4.6%) before the final climb of the day: the Bemelerberg.

A fairly easy ascent if taken on its own, after 250km of racing the 900m climb at 4.5% might just see a rider sneak clear if they launch a strong enough attack.

Unlike last year, the organisers have changed the run-in from the Bemelerberg to the finish line, opting for narrower roads in the hope to disrupt a chase and entice attacking racing.

As you can see, it descends before kicking back up at almost exactly the same gradient until the Flamme Rouge. That final uncategorised rise averages 1.7% for almost 1.5kms. Nothing too crazy, but it could be the place for a last-ditch attack from some.

Amstel used to be a bit of a dull race with most teams and riders waiting for the sprint up the Cauberg and one kilometre flat run in to the line. However, things changed last year with the altered route and we had an attacking race that was delicately poised for a while before it eventually tipped in favour of those up ahead. Will we see something similar this year?

It is hard to draw on any course form given we’ve only had the one edition of this new route but I think we will see an attacking race again and that is because the current world champion, Peter Sagan, is here.

We’ve seen countless times that on terrain similar to this he should be able to make the finish with the main group. His win in Roubaix was incredible so it is fair to say that he is in pretty good form. If the peloton arrives as a reduced bunch at the finish, no one beats him. Well, maybe only one or two have a chance but after a tough day out, not even Valverde can beat Sagan in a sprint. The other teams and riders will know this, so therefore to increase their chances they have to go on the attack early and hope to get into a breakaway that sticks. Unless of course Sagan makes the move himself, then it should be fun!

So with that said, I think it will be someone from a break that goes with roughly 35km left who wins the race. As to who, there are numerous names and potential contenders but I could be here all day going through permutations and nobody’s got time for that.

Therefore, here’s a short list of four to keep an eye on throughout the afternoon.

The not so famous four 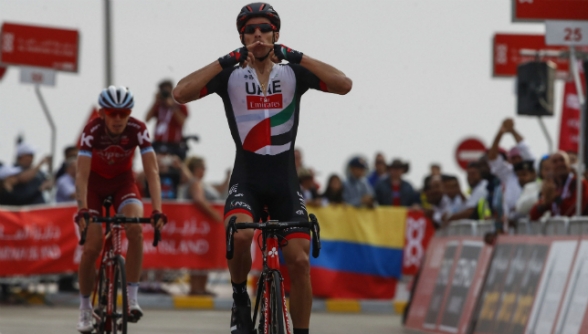 After an exceptional start to 2017, the Portuguese rider has not managed to live up to the same heights so far this year with only a few top 10s to his name so far. He was hampered by illness in Paris Nice but bounced back with a fairly solid showing in Itzulia where he finished 12th on GC. Not spectacular but not bad. The Ardennes Classics are his playground normally though as he heads into this week with confidence and good morale. I don’t think we’ll see him wait around until the finish and he’ll go on the attack at some point, UAE will ride an attacking race in general, it just depends if he makes the right move or not. If it comes down to a small group sprint of 8 or so riders then Costa will fancy his chances.

Another who will like the hand he has been dealt with if he makes it into a small group sprinting for the line. McCarthy is the perfect tactical ploy to send up the road so that Sagan gets a “free” ride behind. I expect Bora to go on the offensive so that they don’t get shouldered with the work back in the peloton. I’m a big fan of McCarthy’s and it is good to see him develop each year. This season he took a big win at Cadel’s Race before taking a commanding sprint victory in the recent Itzulia. My concern is if he can match the best on the climbs, but given their fairly short and punchy nature then he should be able to.

The young Dane has had a pretty disappointing season so far results wise but like a few others, it has been plagued by illness and injury. However, he seems to be on the mend and he arrives at this race as second in command to Matthews, with Sunweb stating that they have a few cards to play throughout the race with Andersen being one of them. A very punchy rider who should be able to cope on these short climbs it will be interesting to see how he approaches the day and if like McCarthy, he gets the nod to go on the attack while Matthews waits behind. A very talented rider, he is not one to underestimate.

Ag2R bring an attacking squad with them to this race as the parcours doesn’t suit anyone on their team 100%. Expect to see Vuillermoz, Naesen, Dillier and Bakelants be attentive at the front and aggressive throughout the day. On paper the route looks best for Vuillermoz as he should be able to cope with the climbs the best. In Itzulia he made a few forays into the break but nothing too exciting to note, however, he will be peaking for this week (like a lot of people) so should not be discounted. I hope we get to see his trademark goldfish breathing style at the head of the race!

An escape to stay away like last year and I’ll go with Jay McCarthy to get the win.

I’ve seen enough of a progression from the young Aussie to have him as a strong contender for this race, he just needs team tactics to go his way!

Thanks as always for reading! Who do you think is going to win on Sunday? Will we see an aggressive race again or will it all come down to a sprint? Anyway,