A pretty benign day and a peloton that was actually pretty well controlled despite the rolling parcours in the finale. Mitchelton Scott were well rewarded for all of their work they did throughout the day, with Matteo Trentin taking the win.

He didn’t have it easy though, just pipping Van Poppel and Garcia in a photo finish. He’ll be taking it easy tomorrow though as all eyes turn to the GC contenders. Let’s take a look at what is in store for the riders.

It wouldn’t be a Spanish stage race without a tricky TT, now would it? 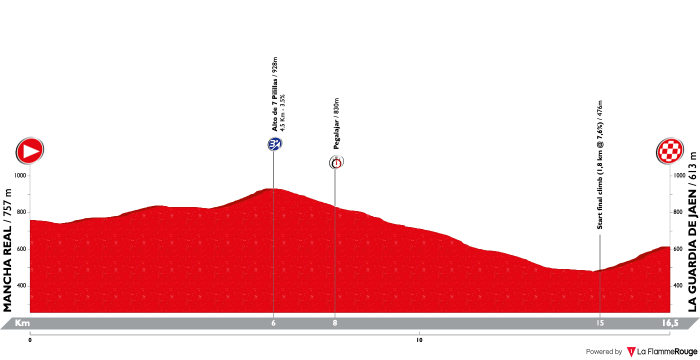 As per usual for the race of truth, I’ve made my own Strava/Veloviewer profile of the complete course that you can view here.

The afternoon can really be split up into three parts with the opening being the first 6 kms and the drag out of Mancha Real.

After leaving the start gate the riders descend for 800m before they start the 5.5km (at 3.6%) drag upwards. However, those figures don’t tell the whole story and as you can see on the profile, the drag goes up in steps, with the final 1.5 km being a proper climb. That section itself averages 7.6% but over half of that is at 9%. Certainly not ideal on a TT rig but it’s something the riders will have to get over!

From there, the next 7 kms are all downhill at quite a steep negative gradient (-6 % average), so it will no doubt be incredibly fast.

The danger here for the riders are the couple of technical and sharp turns that they face near the start of the descent, but in particular the two greater than 90-degree corners that they are greeted with on the outskirts of Pegalajar.

Here’s hoping everyone takes them safely! There is roughly another 1km of very shallow descending, before the riders cross the river and face the final climb of the day to the finish line.

At 1.8 km in length and averaging 8.4%, the organisers do sure know how to make a fun end to the day. Although I’m not entirely sure some of the riders will agree with that sentiment. The climb is tough and long enough for those that have got their pacing strategy wrong to blow up a little and lose quite a bit of time.

The clear favourite for the day given his performance in the opening TT in Valenciana. Izagirre is very competent against the clock and with his ability not only on the climbs but also on the descents, you’d be hard pressed to find someone to back against him tomorrow. Astana are flying at the moment and after a strong performance on the opening day they still have 3, potentially 4, riders in contention for the overall. They’ll all be going full gas and they could well get a couple on the podium in the TT.

Clearly going well after his win on the opening day, he seems to have fully recovered from his illness a few weeks ago. Wellens has been working a lot on his TT bike over the winter and is looking forward to getting his first outing on it here just to see where that has gotten him. Last year he took an 8th place on a rolling course so he will expect a similar result here. Not known as a TT rider by nature but one that is improving, given his early season form then he must be considered a threat for the day. 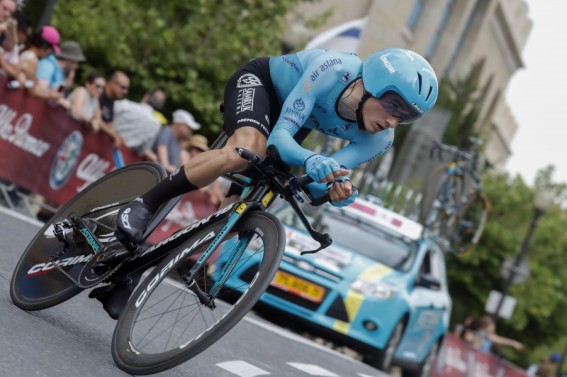 Astana option number 2, Bilbao is an old blog favourite since his Caja Rural days and it is good to see him really improving each year at the World Tour level. He’s another rider that has steadily worked on his TT with a solid 7th place in the opener in Valenciana. On the first stage here, he was doing a lot of work for his team-mates but still managed to finish in the top 10. Clearly he’s in great shape and might just be the sleeper rider for the day.

Astana option number 3. Having only started his season in Murcia, the Dane has found his legs pretty quickly and was the first man home after Wellens on the opening day here. A very hot or cold TT rider, you can never really know what to expect from Fuglsang until he gets onto the TT rig. If on a good day, he could compete against the field here.

One of the consistent GC TT riders who delivers solid results with the very occasional brilliant performance. He’ll hope to be in or around the top 5 but it will take one of those special efforts for him to win. In fact, it is surprising to see that for a rider so consistent he has only 2 professional victories to his name.

Another Astana win, with Izagirre taking the day.

Wellens and Bilbao to finish on the podium as well, but not sure what order!

No bet, at the moment.

Wanted to back Bilbao for top 3 but that’s currently not possible or back him against someone in a H2H as long as it wasn’t Wellens or Izagirre. Will have a proper look at the other H2Hs available now and maybe see what the other books offer later on.