Fairly straight forward day that should end in a bunch gallop. 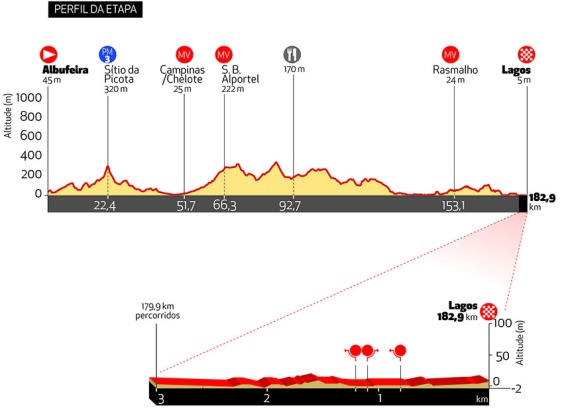 With a lot of the big sprinters here, there should be no problem in maintaining the breakaway all day, so this stage will all come down to the closing kilometres.

Positioning within the final 2kms as the riders have a couple of roundabouts to traverse.

The first they come to at roughly 1.4km to go isn’t too bad, it’s more of a sweeping left hand turn.

However, there is some potentially dangerous road furniture just through the bend.

Hopefully they have the road dividers down (if they can) or at the very least well marked and marshalled. Either way, the riders will went to switch from the left hand side of the road to the right for the next roundabout.

As you can see above, going left takes a lot longer and will severely ruin any chances that team has.

They then pass under the flamme rouge when going over the bridge, before taking one final left at a roundabout.

Again, it’s a fairly tight turn so positioning into it will be key!

From there, it’s a straight final 800m but with a little kick up to the line to make things interesting.

That final 200m averages 3% which doesn’t properly change the dynamic of the sprint as the riders will still be approaching it at very high speeds. However, once again, positioning and timing is made more key because of it. You don’t want to be left on the front at 200 to go as that’s probably just too far in a sprint like that. Coming out of the wheels at 150-100m left would be ideal!

We’re treated with a start studded sprinting line-up here in Algarve this year so instead of rambling on like normal, I’m going to try and keep this brief(ish).

Degenkolb arrives confident after picking up a stage win in Dubai and sprinting solidly on the properly flat stages. He has a very strong lead-out, but I’m more intrigued than anything to see what order they ride in. The slight up-hill kick to the line suits him perfectly.

Cavendish arrives here disappointed after a poor Dubai Tour. A disappointed and angry Cav normally means a fast one! This finish isn’t ideal for him though.

Groenewegen will have been disappointed not to have taken a win in Dubai after performing very well. A real all-round sprinter, he’ll like the look of this finish!

Démare comes here in a  buoyant mood after a good showing in Bessèges. I really like the look of his sprint train, which is odd for an FDJ line-up. He’s definitely a danger man

Greipel took his seemingly annual start of the season win in Spain and will want to test his legs against better opposition here. He’ll want his team to boss the closing couple of kilometres as I can see him going missing otherwise in what is potentially a chaotic finale.

Bouhanni on the other hand will relish the chaos. His lead-out train looks a bit lacklustre so he’ll have to fight for wheels. But hey, when has that ever stopped him before!

Barbero, Wippert and Planckaert may all get in or around the top 10 but aren’t good enough to challenge for the win.

I think this rider is going to have a very good year and taking some big scalps here will be a good way to start that. Allez Arnaud!

Thanks again for reading! Apologies that this is slightly shorter than normal, my time management was a bit off for this one and there isn’t much to discuss really either. If you’ve not already seen it, then my Andalucia preview is up on the site too. I’ll be back again tomorrow with another double preview, although it will probably be Algarve out first. Anyway,