mytwospokesworth in Tour Down Under, Uncategorized January 17, 2019 1,293 Words

A proper damp squib of a stage in the end. I think it might have been a combination of the heat and the riders being concerned about just how difficult the stage could have been that things got a bit conservative. CCC did a great job for Bevin but he was isolated coming into the final two laps so it was surprising to see everyone ride quite conservatively after that – most were happy with a reduced bunch sprint.

So obviously after me thinking the stage would have been a lot more aggressive and completely discounting Sagan, it was the Slovak who took the stage win in an almost carbon copy of last year’s performance. 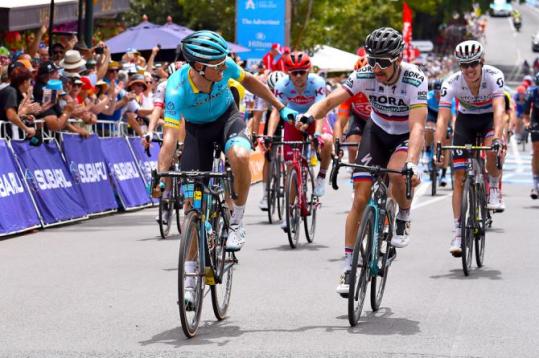 A fast finishing Luis Leon Sanchez almost came close to pipping him but the line came too soon for the Astana man, while Impey picked up some handy bonus seconds in third.

Bevin still leads the race though going into tomorrow’s stage that features the famous Corkscrew climb. Let’s have a look at what is in store for the riders…

There’s no point me beating about the bush here, the stage is all about the climb up Corkscrew Road and the subsequent descent off of it. 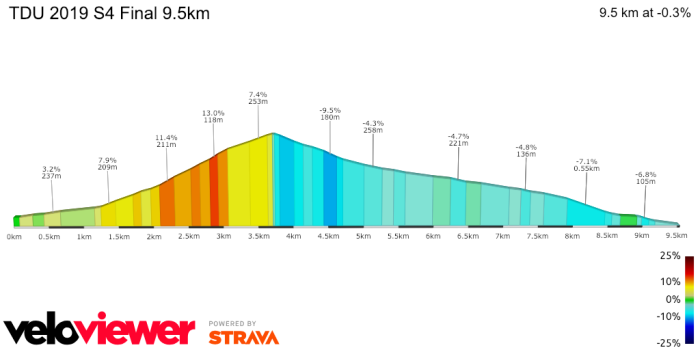 Before the ascent starts properly, the road gradually rises for 1.2km at a lowly gradient of 1.6%, which will be enough to see some of the entry pace knocked off. 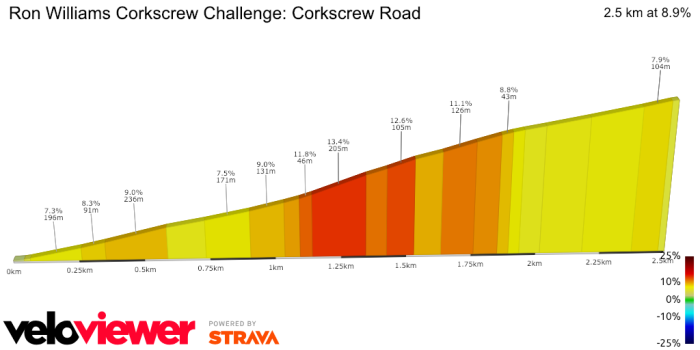 A 2.5km climb that averages 8.9% is pretty tough at this point in the season but it is just border line enough for some of the puncheurs to hope to be able to hold on to the coat tails of the climbers. We saw that back in 2014 when Evans managed to gap the duo of Porte and Gerrans, who themselves put a bit of time into another group of riders.

The descent is incredibly fast, especially near the top, and riders can be expected to hit speeds of 80km/h. However, it does flatten out so you will need to keep pressure on the pedals to keep the momentum going as groups normally join up on the latter half. At 600m to go the riders take one final sharp turn and enter the finish straight, which is ever so slightly downhill to the line.

Another point of note is that the wind looks to be blowing from the west or south-west so the riders should have either a tail/cross-tail/cross wind, which means we should hopefully get some attacking racing. Bad news for those looking to just hold on to the bunch and wait for things to come to a sprint.

Our current race leader Paddy Bevin holds the KOM for Corkscrew Road on Strava, having completed the climb in 6’30 back in 2015. Interestingly, Mike Woods attack in 2016 that saw him and Henao reach the summit first was one second slower at 6’31.

Plenty of riders have been out to have a look at the climb in the weeks leading up to the race, with a couple of them having a go at it race pace… 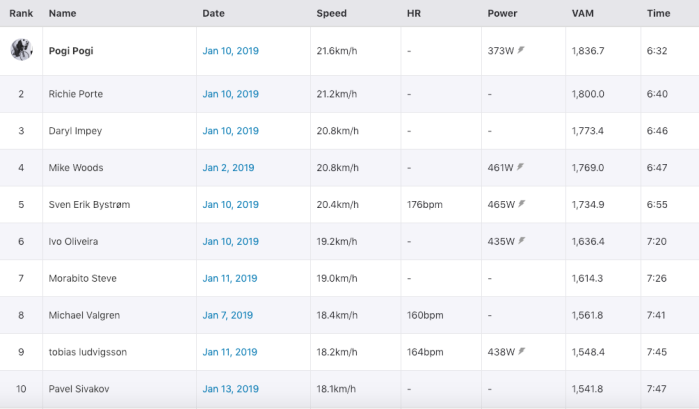 I think we might see the 6’30 mark broken this year, possibly someone going close to 6’20.

The real question that has to be asked here is will a couple of guys, or someone, be able to drop the other riders on the Corkscrew and then hold them off to the finish? If so, then simple, the fight for the stage win will be between them and the race is over at the top of the climb.

If not, then we have the possibility of a small group sprint, or someone launching a counter attack in the closing kilometres if there is no control and cohesion at the head of the race.

I’m not too sure either way, although I’ll give a 60/40 split for those that make it over first not being seen again.

The EF Education First rider put in quite a strong dig near the finale of stage 3 but the climb was not long enough for him to create any serious gaps and the punchy riders were able to bring him back. However, he did look lively and as a rider with previous on this climb he knows exactly what it’s about. Moreover, Woods had a great 2018 season and seems to only be getting better as a rider, especially on the steeper slopes.

He wasn’t able to follow Woods’ attack back in 2016 and he also got dropped by a flying Evans in 2014. This isn’t Willunga and Porte doesn’t have the same amount of success here, which is weird, because it is a pretty similar climb in terms of time taken. It is slightly shorter and steeper but for someone of Porte’s short-climb prowess you would expect him to go well. He showed his face a little on stage 3 but we have no idea what his form is actually like just now. Will he try to put on a show before Willunga or is he confident of sealing the victory there?

Clearly in some pretty good shape at the moment, Sanchez is Sagan’s tip for stage success tomorrow. The Astana man was flying at the beginning of last year and he should be able to cope with the speed on Corkscrew. He might not make it right at the head of the race, but he’ll be able to use his descending ability to catch up easily if there is no pressure on at the front. Sanchez is a master of timing a late attack but as we’ve seen on the past few stages, he isn’t too scared of getting involved in a sprint either.

A little bit of a wild card here but the 2018 Tour de l’Avenir winner is the real deal – will he show that on stage 4? He was attentive and always near the front on today’s stage and he might just benefit from being a less well known rider. Furthermore, he holds a pretty competitive Strava time on the hill so it will be interesting to see if he can replicate that in the race. He’s my dark horse for the stage. 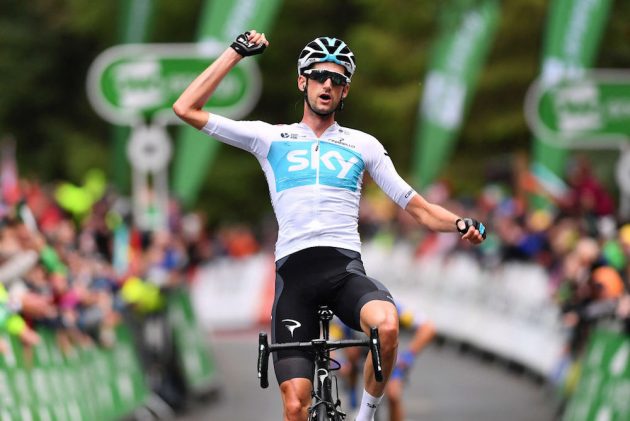 Didn’t put his nose in the wind all of yesterday despite his team doing some of the work in the closing laps, with it instead being Elissonde who launched an attack. Poels is a climber who packs quite a fast sprint so he’d be happy to arrive in a small group. His form is a bit unknown though and he is an enigmatic rider so who knows which Wout will turn up. He could easily blow everyone away on the Corkscrew, or he could be dropped!

Then we have a group of riders in a similar mould; Bevin, Impey, Devenyns, McCarthy and Ulissi. In fact there are even a few more as well, who probably won’t drop everyone on the climb but they’ll hope to make it over close enough to get back on during the descent and fight for the win.

An elite trio of Woods, Porte and Pogacar escape on the Corkscrew, with the Canadian winning the sprint. 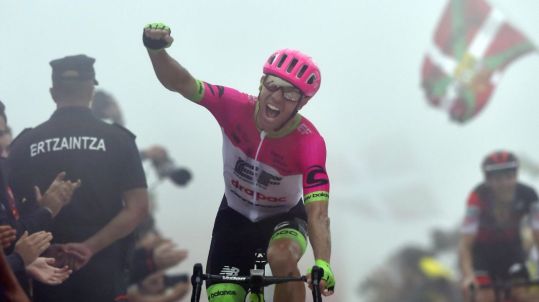 The others will trail in not too far behind but they’ll then need to come up with something inventive to win the race on Willunga.

Going a little wild here as tomorrow will more than likely be a no bet and I really like the Woods pick. Plus, a little value punt on Pogacar too.

Thanks as always for reading. Who do you think will win and in what manner? Anyway,