I don’t think words can really do today’s action justice: it had a bit of everything!

We had a GC contender (Kruijswijk) go on a crazy long-range attack and start the final climb with over a 4 minute buffer to the peloton. Riders dropping out the back like flies as new kid on the block and future Grand Tour winner Bernal set a ferocious tempo that only a select handful of riders could live with, dropping his compatriot Quintana. Bardet was on a coiled spring as he constantly attacked. Nibali looked good but was involved in a fall which at the time of writing looked to be caused by a police motorbike that couldn’t see properly through the smoke. Dumoulin and Froome exchanged digs, before Bardet went again. The pace then slowed and that allowed Landa back to the group which he then almost immediately counter attacked.

That attack then lead out Thomas perfectly who managed to take back to back stage wins, making him the first rider in Yellow to win on Alpe d’Huez since Armstrong.

Dumoulin came home next with Bardet nabbing a few bonus seconds in third. Froome trailed home in 4th with Landa not too far behind. Nibali and Roglic regained some ground to only come home 13 seconds back and it looks like Nibali will get the same time as the GC group after his crash, Roglic was already distanced a little by that point. Although this isn’t confirmed at the time of writing.

It was some great racing but the day was almost ruined by some over zealous fans. Don’t be an idiot.

Anyway, let’s have a look at what is in store for the riders tomorrow.

After three big days in the mountains I’m sure plenty of the riders will be happy to see tomorrow’s profile. 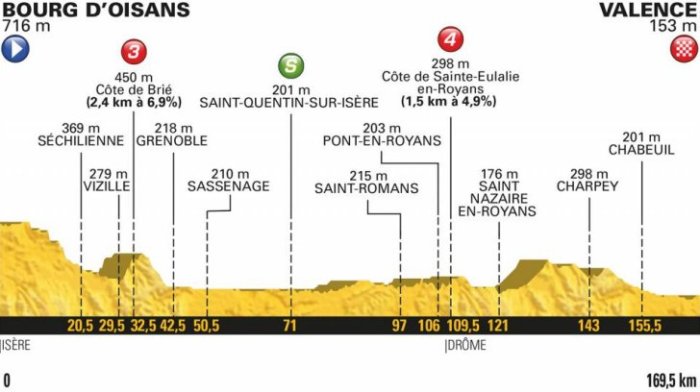 Only two categorised climbs will be music to the ears of those who have struggled and with a descent after 5kms of racing, it will probably be a fast start to the day. The two climbs won’t play any part in the outcome of the stage aside from the first one might see the formation of the break but that all depends on the attitudes of the riders, but I’ll get to that later.

There are a couple of uncategorised climbs later in the day one of which is arguably tougher than the Cat-4, with it coming in at roughly 3.8% for 5kms. It peaks with 36km to go though and starts a series of kickers but again nothing too serious. The riders then descend until roughly 10km to go where the road flattens out a bit.

Those final 10km are mainly easy but there is a bit of an elongated bowl to the finish. 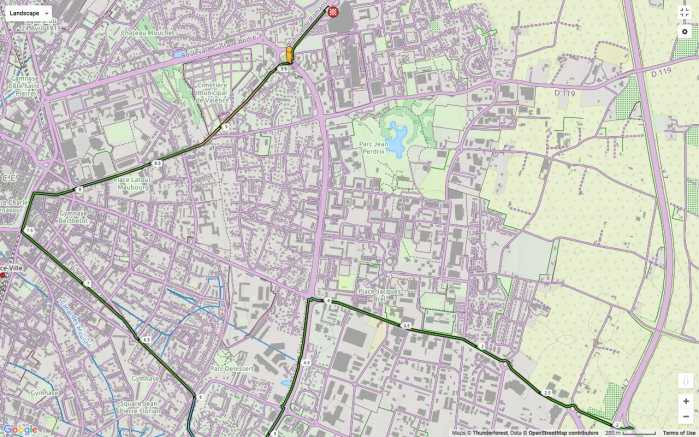 There are a few tight turns near the finish, namely a right hand turn with just under 2.5km to go. Arguably the most important thing to note though is an 800m drag at 2.6% which finishes at 550m to go. This could sap the finishing sprint of some and might tempt others to go for a late attack.

With around 450m to go the riders will face a roundabout but given it is on a wide road it shouldn’t cause too many issues. No doubt though it will stretch things out a little.

That is of course if we see a sprint…

I already had tomorrow penciled in as a surprise breakaway stage due to the tough three days we have had and some of the riders fancying a “rest day”. However, with the sprinters falling like flies today (Greipel, Groenewegen and Gaviria all abandoned), then it makes it very much less of a surprise. We could of course see a stage where almost everyone wants a rest and only 4 guys get up the road and in turn the sprint teams then decide they actually want to control things.

Which fast men do we have left?

Sagan, Démare, Kristoff, Colbrelli, Degenkolb, Laporte, Boudat and Theuns. Although I am stretching it a bit with the last three as they are either not as good as the others or more than likely on team duties.

So avoiding any elaborate argument here then and straight into everyone’s favourite game, again.

Pffft, pull a name out of the hat and hope you get lucky. We might even see Sagan go on the attack for some fun.

All of the riders I’m going to highlight fit a similar mould; strong on the flat but solid on the short climbs and have the ability to arrive at the finish solo.

My yearly Big T bet day is upon us. It is very unlikely that FDJ will work all day for Démare so the best plan of action is to try to send someone up the road. Ludvigsson has slowly started to find his legs again after missing the first few months of the season due to injury. He’s a good domestique who on his day gets a chance to shine in the break. Hopefully everyone has fond memories of him pulling a few whips while on the attack in the Vuelta last year, a day that I was on him at 400/1 but Cannondale decided to ruin the break’s fun because they missed the move. Let’s see if Ludvigsson has the same energy tomorrow!

Cruelly caught within the final 250m of stage 11 last year, he then got his revenge later on in the race by winning the individual time trial. Bodnar is one of Sagan’s loyal work horses and the World Champion might reward him with his own opportunities tomorrow. Bodnar was flying in the Polish national championships where he ultimately lost the sprint to Kwiatkowski. A brute of a rider, you don’t want to give him too much leeway near the end of the day.

A faller earlier in the race, Valgren impressed from the break the other day but tomorrow the terrain is suited to him a lot more. It depends on how Astana decide to use their resources but the Dane looks their best option. We’ve seen already this year just how strong he can be with his two superb wins in Omloop and Amstel. Given his power, he might even fancy his chances from a small breakaway sprint.

With Yates out of the GC picture Mitchelton will need to change their game plan over the remaining stages, it’s a shame they didn’t have a sprinter with them to chase some stages…Anyway, Bauer is a good mix of solid climber but very strong rouleur who can go well on a course like tomorrow. Another rider who has had his heartbroken before at the Tour when he was caught within the final 100m by a charging peloton back on stage 15 of the 2014 race. That was a similar profile to what we have tomorrow, can he find that extra 100m of energy?

Break to stay away and Valgren to win. He looks in great shape at the moment!