A bloke went faster than some other blokes around the town of Valence.

Kwiatkowski delivered a stunning ride to beat Van Emden by a second, after the Dutchman had spent most of the early afternoon in the hot seat. Team Sky returned to their dominant TT performances of the Spring with Moscon coming home in third.

They could have quite possibly had 3 guys in the first 4 as Thomas crashed with 3.3km to go and ultimately finished 21 seconds down on his team-mate. Going from the rolling clock he was just getting back onto his bike at around the 20 second mark after his fall so considering all the lost momentum then he certainly would have been competing for the win. I do find it weird though that he crashed on a completely dry course on a rather innocuous corner; he’s making a bad habit of that!

As for the blog pick, Bevin finished in 5th which was respectable but just not good enough for the win. Boom was a disappointing after being only 2 seconds down at the split but he faded quite badly in the second half.

Jungles obviously lost by a second to Brandle which means I’m continuing off from where I left off at the Giro (not counting the last day winning hiccup with Bennett). Oh well, on to tomorrow and what looks like an interesting and unpredictable stage!

A fairly rolling day out in the saddle with some interestingly positioned climbs in the finale.

The riders will be climbing from the gun, facing the toughest ascent of the day, the Col de Leyrisse. At an average of 4.5% for 8.5km then it isn’t Alpine by any means, but it will certainly have a few guys worried, especially if they’ve been watching the Giro. A short descent follows before the road drags up again at roughly 3% for another 4km.

We then have a longer descent which is followed by a 2-for-1 categorised climb deal: not sure it’s an offer I’d like to see. For the pros though the ~4.8% average for 11km shouldn’t be too much of an issue and we’ll no doubt see a nice controlled tempo.

After that the road rolls with a few small rises but it is mainly flat, before we get into the final 40km which features 3 categorised climbs, albeit just Cat-4s. More importantly though, they will complete a couple of laps of a circuit so the riders will be familiar with the parcours the second time round. 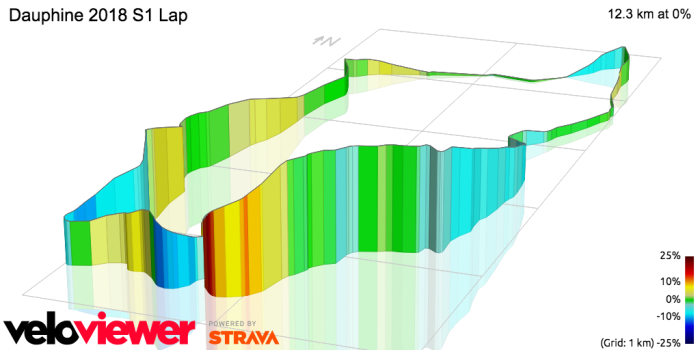 There are two main rises in the circuit, the first is a fairly steady 1.9km at 3.4% before the slightly tougher second climb that averages 4.3% for 1.5km, with a few steeper pitches thrown in early on. Neither are very difficult and we won’t see any GC action but they do offer the perfect opportunity for a late attack from a puncheur.

The start of the descent is a little technical but for the majority of it the riders will have to pedal it in the big ring.

The final few hundred metres are uphill so any sprint will have to be timed perfectly.

It’s one of those days where anything could happen: breakaway, late attack or reduced sprint are all possible outcomes and equally as likely. Well saying that, with Sky now in the race lead I wonder if we will see a typically controlled stage from them and closing everything down to protect that yellow jersey? Consequently, I think the likelihood of a morning breakaway is much reduced but the chances of a late attack sticking are still quite high.

The race isn’t blessed with a great selection of sprinters but to be fair, who can blame them – there are only a couple of days that *might* end in a bunch kick and the rest are all GC days. Looking at ProCyclingStats, these are the top 15 sprinters here…

Definitely not a stacked field when Nibali is the 8th guy on the list!

Out of them all, I would only class Ackermann, Jakobsen and Bauhaus as pure sprinters, while Impey, EBH and Coquard are “tough sprinters” then the rest are puncheurs or lead-out men, and Nibali.

I think the climbs will see the chances of the pure sprinters disappear tomorrow so it will be over to the tough sprinters and the puncheurs to battle it out on the run in to the line.

There are two riders that I like for tomorrow’s stage and one of them is currently in yellow.

This type of parcours and finish is perfect for the Pole as he possesses a fast enough kick to compete with most, especially with the riders we have here. I expect Sky to control the race and hope to set him up for the sprint and gain some bonus seconds as every little bit of time here and there will be very helpful for the weekend. His performance today shows that he is in good form and the rise up to the line definitely favours him.

One of my favourite riders in the peloton, the Aussie is really developing into a great rider and tomorrow’s finish looks like a carbon copy of the uphill drag he won in Itzulia. This is his first race back after a period of rest and training after the Ardennes classics but a 34th place today was a pretty good result by his standards so I think he’ll be going well.

As for late attackers, pick a name out of a hat as to who might give it a go. We’ll probably see something from De Gendt, Valgren and Terpstra. The latter of whom I think might actually have a chance as he delivered a good time today and was lively in the recent Hammer series.

Sky are in Yellow so everything is controlled and Kwiatkowski doubles up, simple!

Thanks as always for reading! Who do you think will win tomorrow and how? It should be a good finish to the stage. Anyway,