The morning break of three never had a chance and it was actually Vital Concept who kept them in check before Quick Step came to help out later on. The gap tumbled and the break was caught once we were onto the circuit. On the final ascent Teuns launched a probing attack but was reeled in, however, Alaphilippe then launched a strong counter that was followed by race-leader Kwiatkowski. That move was then neutralised and a greatly reduced bunch plummeted down towards the final kilometre. There were a few more probing attacks but none of them got much leeway and things were set up for a sprint.

Alaphilippe opened it up early but he was no match for Impey who surged passed the Quick Step rider and took a very dominant win. It looked easy for him in the end! 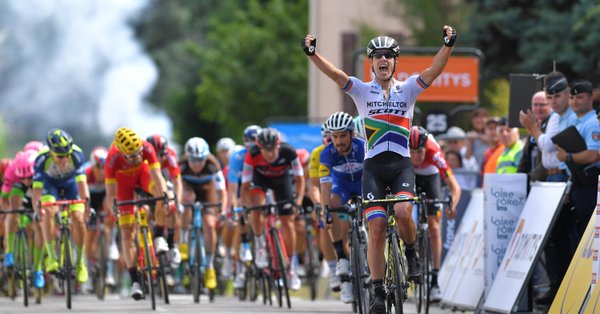 Ackermann rounded out the podium which was a very impressive result from him, much better than team-mate McCarthy. As for blog pick Kwiatkowski, it looked as if he just ran out of steam and didn’t have the kick to match the others at the finish, possibly paying for his earlier efforts. Interestingly, we didn’t see anything of Impey until the final few hundred metres, he hid away perfectly, conserving energy and going all in for the sprint. Risky but ultimately smart riding. Can he double up tomorrow? Let’s have a look at what is in store for the riders.

Another rolling day that is littered with a few climbs in the second half of the stage.

With 2300m of climbing it is similar to today’s stage in that regard but the finish is much easier. The climbs aren’t overly difficult but the majority of them are longer than what they faced today. You can see their lengths and gradients on the profile above.

Arguably the toughest ascent of the day is the Col du Fût d’Avenas which so happens to be the last categorised climb.

It will be a fairly steady effort for the riders though and the Cat-3 ranking might be a bit generous – it’s no Spanish or Italian Cat-3, that’s for sure!

With the peak coming at just under 30km to go, the riders will face a long descent that is interspersed with a few kickers and plateaus. They don’t really stop descending until the final 4km of the day.

A fairly simple run in but a double roundabout just under the flamme rouge will line things out and it is important to not be too far back here.

If today was one for the puncheurs, then tomorrow does look more like a traditional sprint, with the flat run to the line. However, given that the riders pretty much climb/descend for 70km before a drawn out descent to the line, then we could see some of the sprinters put into difficulty. It all depends on who sets the pace on the ascents.

There is more of a chance that the break makes it compared to today’s stage in my opinion. This afternoon we saw Sky happy to take a back seat and I think they will adopt a similar approach tomorrow, letting other teams chase it down for a stage win. If no one takes full control then Sky might just ride tempo and not let things get silly, knowing that they will more than likely take the time back on whoever is up the road later on in the week.

I think we’ll once again see Vital Concept take to the front to try to control things but they will need better luck (Reza’s crash today) and more numbers with COquard in the finale to set him up well. Likewise, we saw Quick Step help to control things today and they will probably chase for either Jakobsen, riding fairly slowly, or they will try and make things difficult to set up Alaphilippe. It will be interesting to see if Mitchelton and Bora now help with pace setting as Impey was imperious today and has a good chance of going into yellow and of course Ackermann was a bit of a surprise package in third, with tomorrow seemingly suiting him more.

I’ve pretty much just listed the majority of them above!

Impey – Clearly in great shape just now, we might see Mitchelton drill it in an attempt to reduce the bunch down to a similar size to what we had today. Has a good chance of doubling up.

Coquard – Disappointing today after his team did a lot of the hard work. He should be able to cope with the climbs but will need someone to help lead him out in the finish, I don’t trust his wheel surfing abilities.

Alaphillipe – Needs it tough but has a chance if that’s the case. Can’t afford to waste energy with pointless attacks.

Jakobsen – Needs it to be an ok tempo, otherwise he will be dropped.

Bauhaus – Will be dropped.

Teunissen – My dark horse as I expect him to be sprinting instead of the aforementioned Bauhaus. He was very impressive at the start of the year and seems to be finally delivering on some of the potential he showed early in his career.

Boasson Hagen – Form seems a bit iffy but he is not a million miles off. Normally he should contend.

Keukeleire – In great form at the moment, he will need it to be selective but he will fancy his chances in a flat sprint against the guys here. 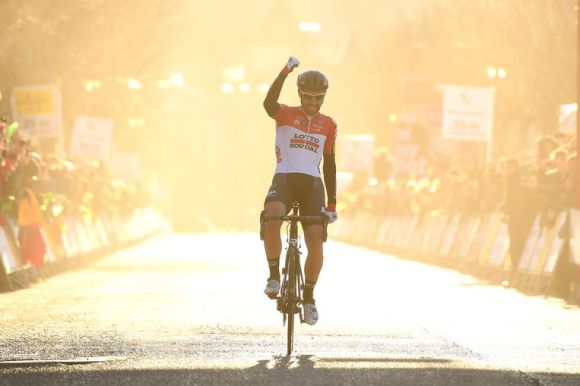 A nice and more than likely deliberate 6’46 time loss for De Gendt today. Expect to see him out there tomorrow, along with the likes of Teklehaimanot and Brandle.

Things will most likely come back for a reduced sprint and it will be hard to see past Impey and Ackermann after today’s showing. Yet, I’ll go for a bit of a surprise result with Teunissen winning the gallop.

He seems to be coming into form at the moment with a good result in the prologue and a commendable 9th place today. Watching back the sprint from this afternoon he kicked and looked to be coming up the inside but was blocked off and had to sit back in the saddle before stamping on the pedals again. As he crossed the line he shook his head, I think he knows a better result was possible with good positioning. If he can follow the right wheel, I think he can surprise from an 80 rider group…

I would have backed TDG if he was 20+ but anything less than that is too short.