mytwospokesworth in Tour Down Under, Uncategorized January 17, 2018 1,127 Words

Well, for the first time and not the last, I was way off with the prediction. I really thought Bora and Katusha would ride hard to try to set up their two GC candidates but instead it was Bahrain who made most of the pushing throughout the day. A combination of a controlled tempo up the final climb and a slight headwind deterring attacks, saw Caleb Ewan take a strong win ahead of team-mate Impey, with McCarthy third.

The Aussie pocket rocket showing how to bounce back well after disappointment on the opening stage. It also means that he’ll be wearing the Ochre jersey going into stage 3, which is another likely to end in a sprint. Let’s have a look at what is in store for them though.

Shortened due to the extreme heat that is expected, the riders will only face one lap around Victor Harbor to finish.

Although there are a few sharp climbs out on route, they are too far out to have any effect on the outcome of the day; this stage is all about that closing 13km loop.

Neither of the hills on the course are overly challenging for the peloton. The first one, known as McCracken Hill, is 940m long at 3.8%. While the second climb is ever so slightly longer at 1.07km and averages 4.3%. Again, not too diffuclt for these guys!

It will be interesting to see if anyone tries a late attack over the second hill considering the fast descent that follows. However, the almost 3km of flat at the end should ensure things are brought back together.

The run in itself does have a few technical aspects to it. One of the first points the riders will be racing too will be a roundabout that comes at roughly 1.2km to go. Normally they are funnelled around the left hand side of it which narrows down the road for the peloton and stretches it out. 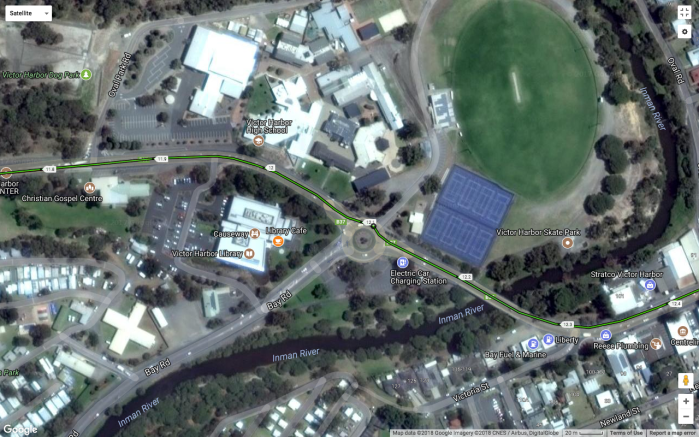 Team Sky did this very well last year and it left a lot of people out of position; making the expend extra energy to return to the front.

Once through the roundabout they have 400m before a crucial right then left-hand turn combination before a sweeping run to the line.

Last year, the top 5 finishers on the stage were all through the final left-hand turn in the top 15 places which shows how critical good positioning is to do well here.

Furthermore, it is important to note that the shortest run in to the line is on the right hand side of the road, hugging the barriers, and I’m sure we’ll see a big fight between the sprinters for that position.

GC riders will have to be wary as well because the technical but fast finish can lead to some splits in the bunch.

I’ll keep this short and sweet as who wants to read basically my Stage 1 preview again?!

We have 4 riders who seem to be ever so slightly ahead of the rest, given they made up the top 4 in both the PCC and Stage 1.

Ewan – His confidence will be through the roof after his win and having taken victory here last year, he’ll certainly hope to repeat it. He’ll need a good lead-out from his team-mates as they were a bit off the pace on the opening day.

Greipel – Rolled home yesterday knowing the finish was too tough for him, but he did look miffed when the cameras lingered on him. Maybe he did actually think for a while he might make it, but eventually gave up the ghost. The power he has demonstrated in the PCC and Stage 1 can’t be underestimated and this stage should suit him. Missing a pilot fish might be of detriment to the gorilla.

Sagan – Finished fast on stage 1 and was up there again on stage 2 but he just didn’t seem to have the legs to hold off Ewan. He slowed down to let McCarthy take 3rd, so maybe that was the plan after all, but it is hard to tell!

Viviani – A quietly impressive 6th place for the Italian highlights that he certainly has some good form at the start of the season. It looked for a while as if he was going to win on the opener, but he seemed to launch his sprint too early and ran out of steam in the end. If Sabatini can deliver him later, or if he can come off the wheel of someone, he is a danger.

Bauhaus – He finished very fast on the opening day but was just far too far behind the action when he needed to be near the front. I still think Sunweb are trying to figure out the lead-out but if they get it right he could be dangerous.

Consonni – I was very impressed with the young Italian towards the end of last season as he picked up strong placings in some fairly high-profile races, while still being a neo-pro. Another who finished very fast on the opening day, he slogged his way to 16th on stage 2 which is a sign of his talent and is another who might sneak a podium.

Bennett – Bora’s second, or first option, depending on how you look at it. He was suffering from a cold before the race, but given his bitter disappointment at dropping his chain on the opening day, I’m going to take a stab in the dark and say he’s over it. As it is unrealistic that McCarthy will be getting any bonus seconds here, it will be up to the Bora management to decide who sprints. Sagan is known to be a good team-mate and I have a feeling he might let the Irishman have a go for it on stage 3. If so, given the way he finished last year then he is a serious threat for the win.

There’s something that is drawing me to Viviani for this stage and I’m not entirely sure why. He is fast, that is for sure. QuickStep haven’t got their lead-out bang on during either the PCC or Stage 1. In the PCC they were too far back, while on Stage 1 they dropped Viviani off to early. Maybe they’ll get it just right this time?

I think they will.

I also have a sneaking suspicion that Bennett will be up there fighting for Bora too.

Thanks as always for reading. Who do you think will win? Will we see a new stage winner or will it be a repeat victor? Anyway,