After missing writing a preview for Emilia and Begheli due to some other things that cropped up, I thought it was only fair to get back into the swing of things with the next Italian one-day race; Tre Valli Varesine.

This is a time of the season that I enjoy. There is something about the Italian one-day races that are really special and this one is no different. A tricky circuit finish around Varese lends itself to some aggressive and tactical racing and we could see a whole host of outcomes tomorrow.

Last year it all came back together despite several attacks in the closing 10kms and Sonny Colbrelli won a very reduced sprint, beating Uran and Gavazzi. 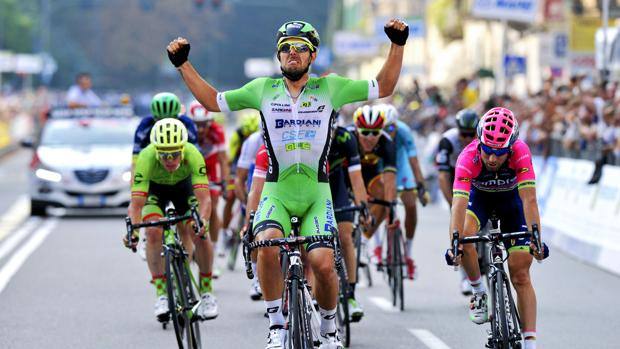 Will we see a similar outcome this year?

Let’s take a look at what is in store for the riders.

Pretty much the same as previous years with the riders leaving Saronno and completing almost 80km before they reach Varese and the traditional lap finish.

Credit goes to @LasterketaBurua for the two main profiles I’ll be using today. Go check them out on Twitter and thank Ricky and Rafaelle!

The key part of the day is obviously the circuit in Varese that they will face 9 times. You can view an interactive profile of it here.

An undulating parcours, there are two important tests that the riders will face.

First up is the short 1km (at 7.3%) climb. Due to its proximity near the start of the circuit it is hard for any winning moves to be made here, but it can be used to put the strain on the opposition. It is certainly tough enough though that some riders from several of the strong teams can breakaway here and not be seen again.

Once over the climb, the riders face a mixed-bag of descents and flat before they reach the final 4km.

These areas of flat often see an attack made, but only for the rider to gain 30m or so and be reeled in. Another will go, but the same will happen again! It is similar to the climb in the sense that a move could escape here but it would require either the right number of teams represented, or that the chasing “peloton” behind is actually only 8-10 riders big and no one wants to work together.

More often than not though, the race is decided by the final drag.

With the steepest ramps coming right at the bottom, riders normally attack the final turn coming off of the descent so that they can be the first into the climb. This is what Nibali did rather brilliantly in 2015 on his way to victory.

I hope you didn’t get motion sickness after watching that!

Gaps can be made on the ascent but you need to be a very strong rider to maintain them if there is a concerted effort behind to chase. The one thing that does aid the solo rider is that things are very strung out from the bottom so it is hard for help to come from behind.

Anything that is brought back though then leaves the group open to counter-attacks again as the road then flattens out going into the final kilometre.

If things do stick together we’re most likely to see a group of no more than 20 riders contest a reduced bunch sprint.

It beats me – this is arguably the most stacked start list this race has had in a long time, which certainly throws a few proverbial spanners in the works. There are several World Tour squads here who bring very strong teams and a selection of riders that can compete in differing scenarios.

Looking at the past three years you might think that a reduced bunch sprint is the most likely option.

Yet, given that it has happened 6 out of the last 9 editions, a solo rider winning is statistically the most likely outcome. However, with the much stronger teams here, then in theory it will be very hard for someone to stay away on their own.

The only way this can happen is if the race is ridden very aggressively from 3 or 4 laps out and the peloton is really stretched out going into the final circuit.

However, I think a group getting away early (i.e. before the last lap) to contest the finish or a reduced bunch sprint are the more likely options. Of course, with the former option we could see a solo victor!

Trying to cover my back as much as possible here 😉.

Names to look out for

Like always I’ll only suggest a few names to look out for as you and I could be here for a while otherwise!

Superb in the time trial at the World’s he will come here full of confidence. With that race being his main target for the end of the season, there is a chance he could take his foot off the gas here. Unlikely! With Lombardia not too far away, he could well test his legs here. Given his incredible power at the moment, he is someone who could attack out of a small bunch  and stay away to the line. For that to happen he would need some luxury team-mates behind to mark everyone out and I guess he is in luck as he has just that!

His recent win in Toscana was a big middle finger to the British World Champs selectors, a course that he potentially could have animated in the finale. With Sbaragli most likely to be involved in any reduced sprint, then Cummings will be given the nod to mark out any attacks and make the race aggressive himself in the closing. I said above that the flat sections during the descent are ideal for a strong rider to attack an incohesive group; what I meant to say was that it looks ideal Cummings territory. He’s one of the few in the peloton who I think could get away and make it stick!

The Italian was very strong in these races towards the end of last season and I’m sure he’ll be looking to be at the same level this year. Giro dell’Emilia was his first race back after his KOM success at the Vuelta. Working for Uran, he put in a fairly solid performance and the favour might be returned here. Packing a fairly solid sprint from a small group, he could surprise.

Attacking in both of his recent races, the Danish rider seems to have carried some good form into the end of the season. Given his ability to cope with the short climbs, the course tomorrow looks ideal for him. Astana arrive without a sprinter so they will have to animate the race to make it successful and I think Valgren presents one of their better chances. A powerful rider, he should be able to churn up the final drag!

I have to include a PCT Italian rider in here somewhere! Canola has performed very consistently over the past few weeks, finishing no lower than 16th in all of the races he has competed in during September – not bad. He won the hilly Limburg Classic earlier this year, along with a tricky circuit stage in the Tour of Utah. He’ll probably have a tough task winning against the opposition here, but stranger things have happened.

I think we’ll see the World Tour teams try to make this as an aggressive race and we’ll see the toughest Tre Valli Varesine in a while. Consequently, it will be unlikely that the bunch will be held together enough for a reasonable sized bunch sprint of 20 riders. There is a chance we could see 5 or so riders come to the line but I don’t think it will be any more than that.

Nibali looked exceptional in Emilia, but I think the drag up to the finish is suited much more to the new TT World Champion.

Dumoulin to attack and manage to hold off everyone behind thanks to Matthews marking anyone trying to follow as they won’t want to take the Aussie to a sprint.

Not sure who else has prices, but in the UK SkyBet do.

Thanks as always for reading and as usual, any feedback is greatly appreciated! Who do you think will win and how? I think we’ll be in for a very exciting race! Anyway,