After some strong performances in the individual time trial on Tuesday, the rider’s focus now switches to the road race on Saturday afternoon.

Last year in Doha we had a large bunch sprint that was won rather surprisingly by Denmark’s Amalie Dideriksen.

Pre-race favourite Wild could only manage second, with Finland’s Lepistö getting up for third. Two of those three are here this year, with Wild as a reserve for the Dutch team, will they be up at the pointy end come the finish tomorrow?

First, let’s have a look at what is in store for the riders.

The women will face 8 laps of the circuit around Bergen, totalling 152.8km; which makes it one of the longer races the peloton will face all year.

As for the circuit itself, it can be described as rolling with very little flat all day. Taken in isolation it is not too difficult but it can be made hard by some aggressive racing.

You can view my interactive profile for the circuit here.

The most challenging part of the route is of course “Salmon Hill”; I guess the sponsors wanted to get something out of the week! However, the road does ramp upwards before then and the climb can be taken as a 3.7km test. 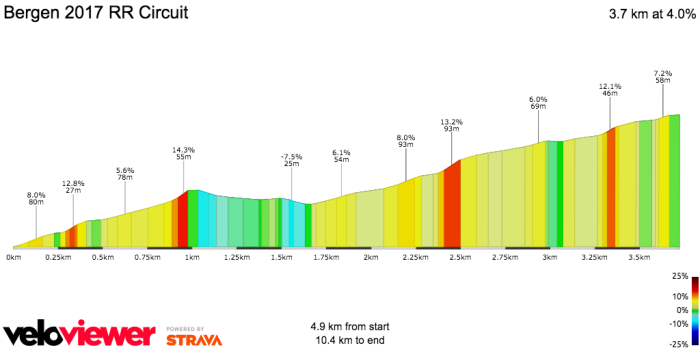 It’s not steep like the climb we had in the time trial, but it is long enough to cause some splits in the bunch. Will a rider try to take advantage of some of the sharp ramps to get an advantage?

With 10km to go from the crest, it could be tough for someone to stay away though. A small group definitely has a better chance.

Conversely, those final 10km allow for a chase to get organised and reel it in. “Organised” is the key word there though! In both the road races today, the chase was not coherent enough and the escapees held on for victory. Will something similar happen tomorrow? I’ll guess we’ll have to wait and see…

How will the race pan out – Dominant Dutch?

As is often the case when we arrive at World Championship’s the Dutch bring a formidable team. We saw this last year when they had a superstar squad in support of Kirsten Wild, but one that would be allowed to chase an opportunity if it arose. Unfortunately it didn’t work out last year so they’ll be hoping to bring another World title home this time.

I could feasibly make an argument for all of their starting 8 riders to win the race, although some would be more farfetched than others. Nonetheless, it just highlights their immense strength in-depth. I’m not sure they go into the race with an out-and-out leader; possibly Vos might be kept back for a bunch sprint. But then again, Blaak or Pieters could fill that role if the 3x-former champion is allowed to do what she wants. Van Vleuten and van der Breggen were exceptional in the time trial and both clearly are in great form. I imagine they will be the prime attackers, hoping to split the race up on Salmon Hill. Can anyone follow?

I think if we see a group escape in the closing laps that has 2 Dutch riders within it then that will be game over and the winner will come from there.

The one reason I say this is because no other team has an Ellen van Dijk. She is incredible and can bring back strong breakaways herself by setting a strong tempo at the head of the peloton.

There are a few teams who might hope for a 40-50 rider sprint, such as Denmark, USA and maybe Australia, but I don’t think anyone has the firepower to bring back a strong move on their own. They’ll need a lack of cohesion up ahead, and a lot of co-operation behind for that to happen.

The next to consider is that if the smaller group will come to the line and sprint it out, or if it will fragment and split again. That of course all depends on numbers and team representatives, but I think it will split into a smaller group which will battle it out for the win.

Aside from the Dutch team, there are plenty of riders who will love the route tomorrow but the following list won’t be excessive, so apologies if I have missed someone you were looking/hoping for.

The US pocket rocket has had a great first year racing for a European team. She’s proven that she is much more than a fast sprinter though as her climbing has developed a lot. In the Ardennes she was able to follow the best until the very final stages of the race. I don’t think the US team will be banking on it coming back for a big bunch sprint tomorrow so both Rivera and Guarnier will be given license to attack. If the Sunweb rider does come to the line in a small group, she has to be the favourite.

The British team have one of the favourites in the shape of Deignan but her form is unknown just now after having her appendix removed. I think they’ll ride an aggressive race and hope to get two riders into any strong move that goes off the front. With everyone marking Deignan, then Barnes could make the final selection. She performed above expectations in the TT so she is in good shape. Not as strong a climber as some of the others, she won’t be too far off the pace but will hope that the final selection will have gone before Salmon Hill. With a fast sprint after a tough day, she is an outsider to keep an eye on!

Former World Champion and arguably the rider with one of the best season’s of all time back in 2014/2015 when she held 3 separate World titles, the Frenchwoman has a good chance of going well again here. A pretty uneventful season due injury and illness; she’s only managed 8 race days so far; picked up again at Plouay where she finished second to Deignan. Since then she has went on to podium at the mountain bike Worlds and could really have challenged Neff for gold if it had not been for an untimely puncture. She can climb and with a fast sprint from a small group, she won’t be afraid to bring it to the line.

A rider who I have grown fond of over this season (it has absolutely nothing to do with her being in my season long fantasy team, I promise), the Aussie can climb with some of the best in the world on her day. I expect their squad to be attacking all day and Gillow is certainly someone who can follow attacks on the climbs. She lacks any kind of sprint really, but she makes up for that by being a strong time trial rider. Something I’m sure Carlton will remind you of tomorrow! If we get a group out front and she times her attack perfectly, it might just stick. Look out for her and her now standard snood off the front!

Another one of those riders who is a solid climber but also packs a good sprint. She recorded a top 15 back at Liege in the Spring which highlights her ability on the short climbs. However, she might find it difficult to follow some of the strong climbers if they go crazy on Salmon Hill. Nonetheless, if she can remain close to the front and there is some type of regrouping then she is a danger in the sprint.

As I mentioned above, of course there are several riders who could contest but I’ve only cherry-picked a handful for the preview. It should be an open race but I don’t think the winner will be a “surprise”.

The Dutch to have ‘too many cooks’ and with everyone expecting them to chase down every move as the strongest team; Pauline Ferrand Prevot to take advantage and win her second road title, signalling that her career is back on track!

Van der Breggen to pick up her second second of the week, with Barnes coming home just behind them in third.

Three selections from me to cover a few options; PFP as my favourite, Barnes as an outsider, then Gillow as a solo arrival. I’ve already backed Barnes at 300/1 but that price is long gone. I think the 66/1 available is still worth a punt though.

Thanks as always for reading! Who do you think will win tomorrow? Can anyone outsmart the Dutch team? Anyway,