A fast day in the saddle. the race finished a good bit ahead of schedule. With a strong break going from the gun, we easily could have seen them build up a 6-8 minute advantage. However, BMC had other ideas and began setting tempo at the front of the bunch early on, never allowing the advantage to go much further north than 3 minutes.

Once onto Belles Filles itself, Kwiatkowski took over and set a terrific tempo for Sky, resulting in riders slowly being churned out the back of the peloton. Yet, it was such an infernal pace that it put his own team in difficulty. Landa and Henao never managed to put their nose in the wind at all, and it was left to Nieve to take over.

Aru sensed the Spaniard was slowing and attacked with 2.2km to go. A foolish move considering Sky’s ability to drag those attacks back in the past, except he just kept getting further away. Thomas closed down an attack from Yates, but wasn’t able to offer too much more after that so Froome himself went on the offensive. Only Porte, Bardet and Martin could follow the yellow-jersey elect, but after some looking around the group behind caught up again with around 800m to go.

By then though, Aru had the stage in the bag, taking a great victory for the blog! And himself too I guess… 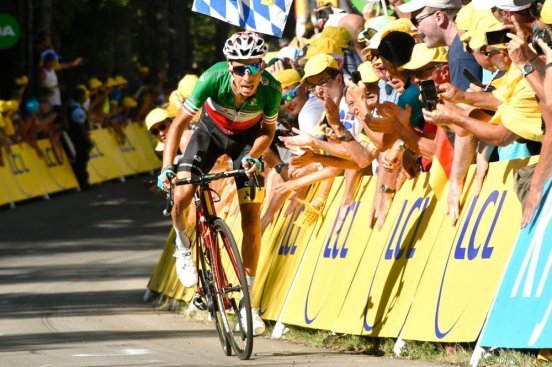 What really impressed me was the gutsiness of his attack, but more importantly the way he kept driving to the line, only posting up to celebrate once over the finish.

Behind, Martin launched a terrific attack to gain time on the rest and finish second on the day. While Froome managed to pip Porte to third. I’m sure the latter will be disappointed after his team did most of the work today.

There’s still a long way to go and plenty of mountains left, just not mountain top finishes, but it is promising that it isn’t going to be a complete two-horse race.

The GC riders will take a back foot tomorrow with the sprinters having another chance at glory. Let’s have a look at what’s in store for them.

A fairly benign and long day in the saddle at 216km – it is a typical transitional stage! 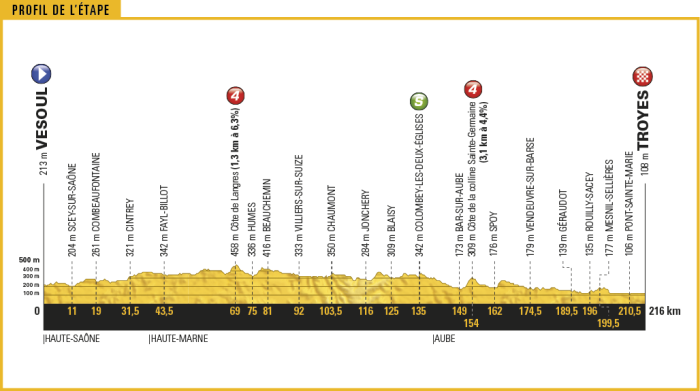 Nothing major to note until we get towards the finish in Troyes. I got mildly excited when looking at the weather forecasts as we do have some 25m/h crosswinds early in the stage but they die down once we get to 50km to go. So we won’t see any echelon action! 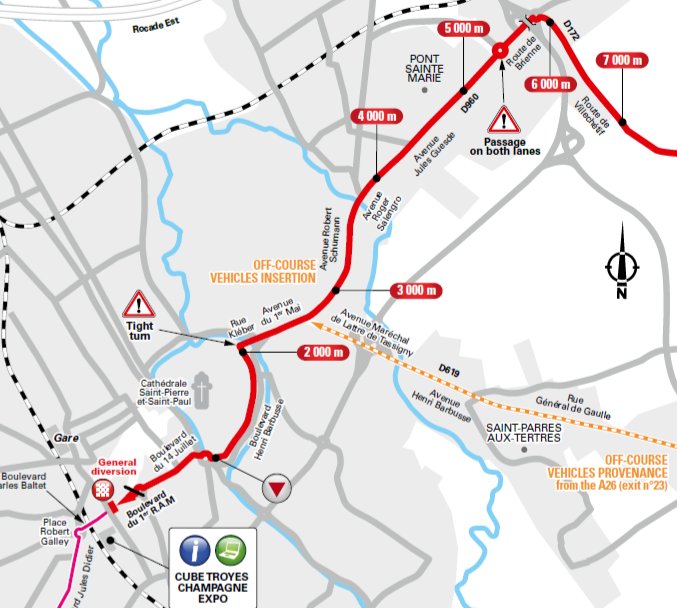 The final 5km gets progressively more technical. Aside from a roundabout at around 5.5km to go, the lead-outs will be able to organise themselves and we’ll no doubt see a big fight to get to the tight turn just before 2km to go first.

From there, the road slowly bends around to the right. Holding the inside line will force opposition teams to take the outside route, elongating their own run in, and potentially tiring them out/ruining their timing.

More crucially though, it is important to be at the front going under the flamme rouge as things will get messy.

Just as they pass under the kite the riders will be faced with this roundabout where they will be funnelled around the right-hand side. Well, according to the road book anyway.

The riders will then have to contend with another roundabout at what appears to be ~250m to go.

However, it is not as bad as it sounds, with it really only being a slight kink in the road. The worst part though is that the road narrows from three lanes to two and some riders might find themself running out of space!

With some of the key sprinters now gone from the race or injured, we should in theory have a safer run-in as fewer people will be competing for the win.

Démare has had the best/most consistent results out of all the sprinters so far with a second place and a win to his name. He was somewhat lucky to get away with cutting across Bouhanni on Stage 4 but there is no doubt he is one of the strongest here. He has a lead-out train long/strong enough to control it in the final 2kms but they’ve been disappointing so far. Can they turn it around tomorrow and see Démare take a second win? 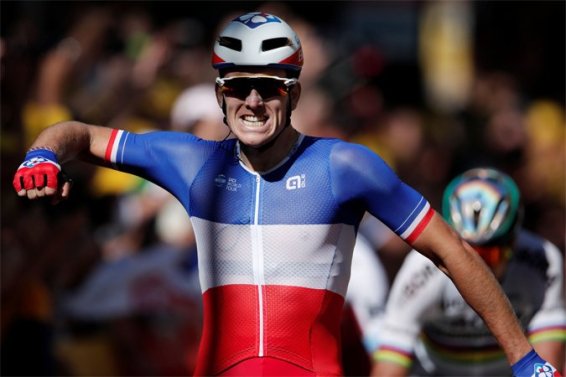 Kittel was never in it on Stage 4. Positioned too far back, he never got close to the top 10 of the race before it was decimated by the crashes. Another lead-out that was fairly disappointed, with a team as good as QuickStep, you would expect them to turn that around tomorrow. The crazy on sprint on stage 2 shows the German has form, but will he be in a position to show that again?

With Cavendish and Sagan now gone, it certainly opens up the sprints more and in theory should make them less chaotic as we’ll have fewer lead-out trains fighting for position.

Kristoff and his Katusha team were keen to do some work on Stage 4 but possibly took it up too early. The Norwegian came away with a second place but I’m not too sure what we can fully read into it. I’m still not convinced he’s as strong as he was in 2015 but with Zabel he has a very good last man he can trust. Another podium is a possibility.

Greipel picked up another podium on Stage 4 but he seemed to be really struggling today and was one of the first riders dropped. Ill? Or was he just using his experience and saving as much energy as possible?

Bouhanni is one that interests me a bit for tomorrow. Clearly riding himself back into a bit of form after his crash in Yorkshire, he was unlucky to be blocked by Démare on Stage 4. The technical final kilometre should suit the brave Frenchman and he does have the speed to compete. Will the win be too much? Only 1.19% (or 1/84) of the previous 4 Tour stages have been won by a rider riding at Pro-Conti level. 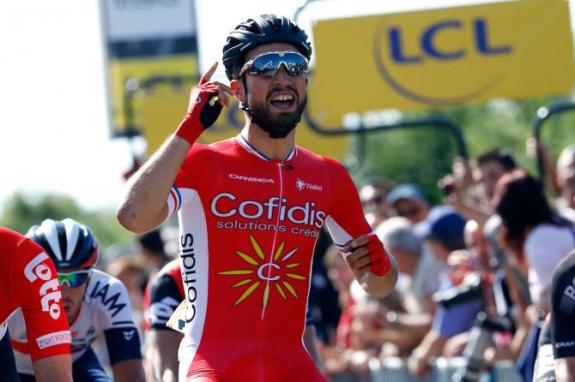 Credit to @padsbets for that stat.

Groenewegen, Colbrelli and Matthews will be close and fighting for the top 5 but they should get a top 10.

Kittel will return to winning ways! 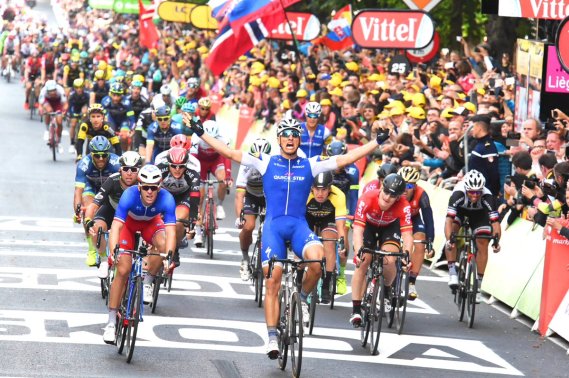 But I think we’ll see Bouhanni sneak onto the podium, the finish looks good for him. Just need Démare to stay out of his way!

Not willing to risk Kittel at his odds, so I’m once again going with a better value play on Bouhanni.

After two successful H2Hs in a row, I’ll play the profit up for tomorrow. The 3.6pt was turned into 7.92pt today so I’ll put…

Thanks as always for reading, who do you think will win tomorrow? Will it be an easy win for Kittel or will someone else challenge him? Anyway,