An exciting finale that had a little bit of everything but in the end the result was inevitable, wasn’t it? After managing to clip back into his pedal after unclipping, Sagan still had enough power to hold off a charging Matthews on the line to take a great stage victory. 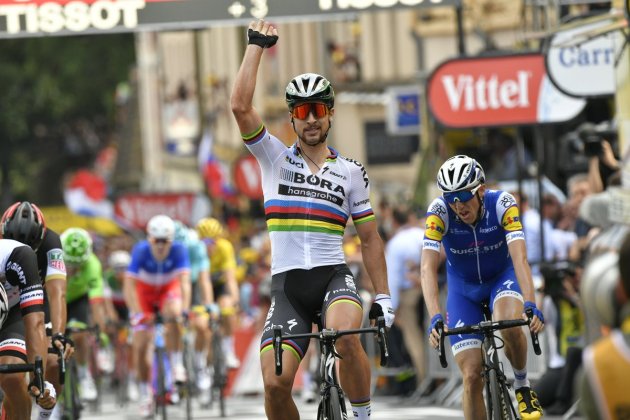 Dan Martin was the best of the GC guys, coming home in third place and taking 4 bonus seconds on the line plus a 2 second time gap back to the main GC group. Yates was the worst off today, losing 8 seconds to the likes of Froome/Porte etc.

A special mention must also go to Démare who managed to hold on to the wheels of the climbers and eventually finished 6th. He’s in stupendous form at the moment!

Will he get a chance to go for the win tomorrow?

A fairly simple stage with not too much to talk about! 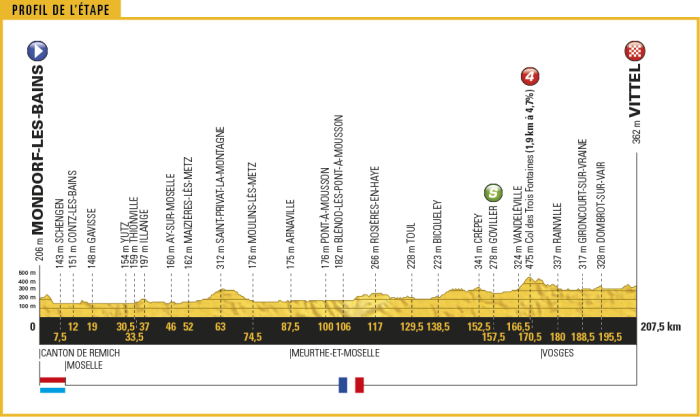 It should be a day for the sprinters so the stage is all about the final few kilometres. 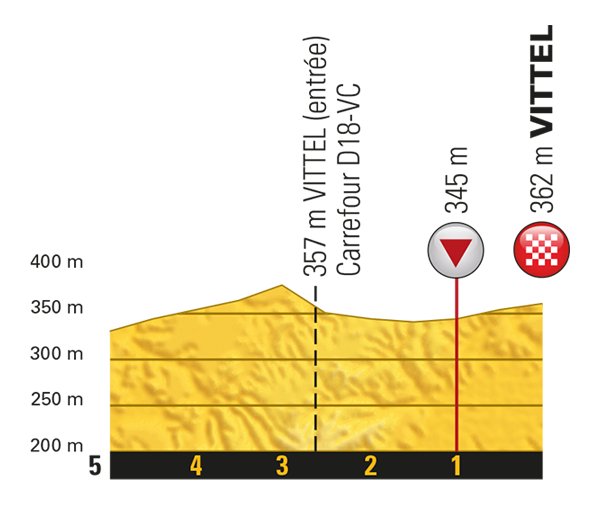 The road does rise and fall in the final 5kms but it’s nothing too severe. The climb that you see on the profile above averages roughly 1.8% for 2kms, so nothing more than false flat. Likewise, the finish itself does ramp up but it is only 1.7% for the final kilometre.

I’m sure all of the sprinters would expect to be there!

As for the run-in itself, it is more technical than what we had on stage 2.

So here comes a little preview by pictures…

The first challenge the riders will have to face is the turn onto Rue de la Vauviard after they come off the short descent.

Having gathered up a lot of pace, they’ll have to be careful not to misjudge the bend as it is a lot tighter than I expected going off of the stage map. From there, they will face a sweeping road until the “tight turn” at roughly 1.5km to go.

On a two-lane wide road the fight for position will be important as the best way to take the turn at maximum speed is to sweep from left to right. From there, they continue towards a roundabout which is a lot more precarious than the road book suggests. 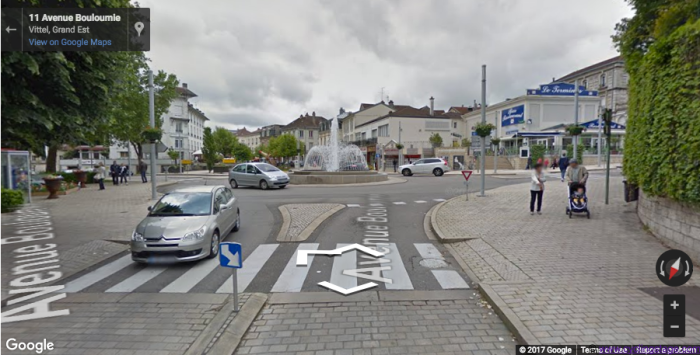 The two lanes that they approach on are split by some nasty looking road furniture, with the roundabout itself being very narrow. I hope we don’t see any accidents as every tries to funnel right.

Once through the roundabout the riders will hit the Flamme Rouge and from there things get a lot easier with no more sharp turns and slightly wider roads.

Can anyone beat Kittel? Probably not.

The German was incredibly strong on the opening stage and if he produces the same amount of power tomorrow then he should eat up the finish. He will be hoping for a better lead-out though as he can’t afford to go too early on the rise as it could catch him (or anyone) out.

Démare again looks like his main challenger. The Frenchman missed his structured lead-out on stage 1 and he’ll bo hoping that changes tomorrow. They have the numbers to control the final 3km which is a huge advantage. Not afraid of a slight drag to the line, he has a good chance of going better than stage 2. 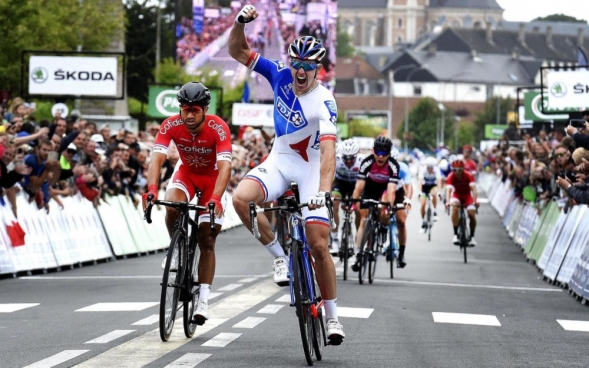 Greipel loves a tougher sprint finish like this and he no doubt will be there at the end again. His train isn’t the best, he’ll need to use all of his experience to stay near enough to the front through the technical sections.

Cavendish took some promise from his result on stage 2. With another day of racing in his legs, will his form be on the up? Who knows! I’ll repeat what I said for the last sprint stage, his result won’t surprise me either way!

Bouhanni is the local boy and he will relish the technical finish. However, I’m still not convinced he’s at 100% after his crash in Yorkshire. He’ll give it his all and like Cavendish, I won’t be surprised with whatever he does. 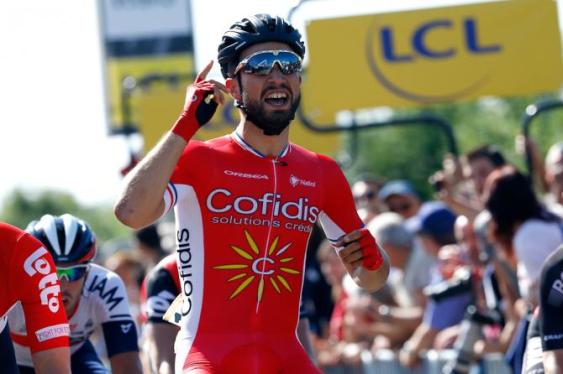 Groenewegen normally goes well on tougher run ins. The young Dutchman has no fear so he should be well positioned going into the final kilometre. Does he have the legs to compete with the best? A 5th on Stage 2 was promising and he may well sneak a podium tomorrow.

Matthews produced a very impressive final few hundred metres today, but it was too little too late. Not the fastest in a pan-flat sprint, the ever so slight gradient does bring him closer to the other sprinters.

Degenkolb was never really involved in the sprint on stage 2 and he might struggle with a lack of support. However, he looked very strong at the start of the year and you have to imagine that he will be close to that form again due to it being the Tour. If things click tomorrow, we might see a good result from the German sprinter.

Sagan will of course be up there again. Hampered on Stage 2, he was truly exceptional today. I wouldn’t be surprised to see him go back to back.

Colbrelli and Kristoff will looking to top 10 again. 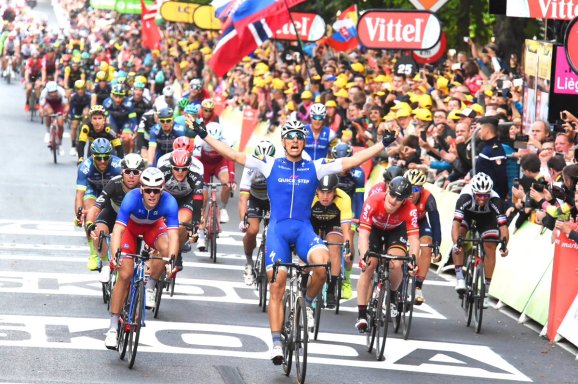 He certainly can be challenged though and a few riders will fancy their chances, it won’t be as “easy” for him as it was on stage 2.

No value in Kittel but there are two “outsiders” I’d like to back because the odds are just ridiculous for them.

The Sunweb rider actually has a fairly solid lead-out train with him and theory could be one of the better positioned riders in the finale tomorrow. He got blocked off on Stage 2 so could never really make any effort to go for the win. His finish today gives me a lot of confidence in his power right now and I think he could be up there tomorrow again. Definitly should be lower than a 66 or 80/1 shot.

He’s not been great as of late but that doesn’t warrant his massive price, I think his form is actually on the up. Another rider who didn’t really sprint at all on Stage 2, he might get lucky tomorrow. I find it absurd that he’s that price while McClay/Kristoff/Colbrelli are all shorter, and by some margin.

Probably another two losing “value” bets, but they could run close in a hectic finish.