I’ll be honest, I only caught the last 5km of the stage today. There was a crash earlier in the day involving Froome, Porte and Bardet but given early reports I don’t think it’s too serious for any of them.

We did end up with a sprint, no echelon action unfortunately, and it was a very messy sprint at that. No team was able to take control in the final kilometre and a few of the fast men were left on the front too early.

In the end, Kittel produced an incredible sprint to win comfortably. Well, as comfortable as you can be in a sprint like that! He was in the wind from about 400m to go then latched onto Colbrelli when the Italian launched, coming round him in the final 150m. 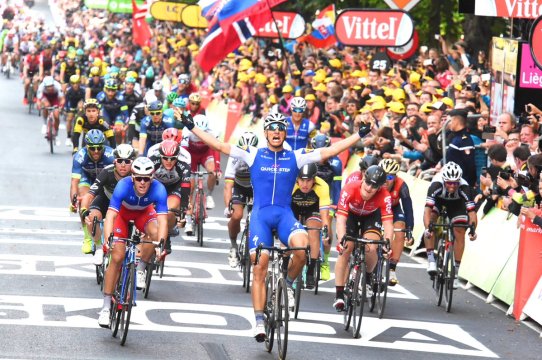 Démare and Greipel rounded out the podium, with Cavendish finishing a promising 4th. Hopefully we’ll see more of him over the coming week.

The result sees Kittel move up to third place on GC. Will he be fighting for stage honours tomorrow and a stint in the yellow jersey? Let’s have a look at what’s in store for the riders.

Another long day in the saddle at 212km, the terrain is definitely more rolling than today’s stage. 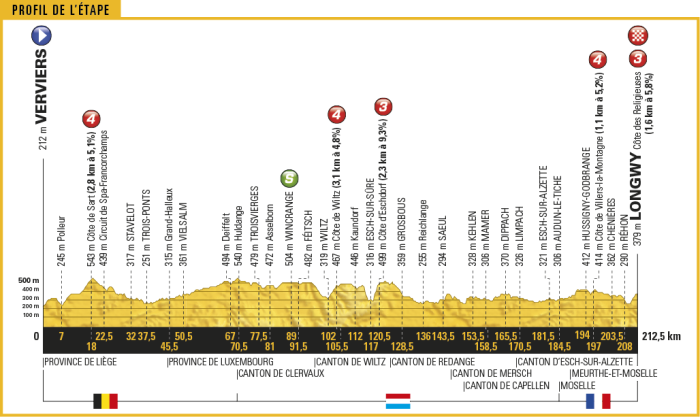 There are 4 categorised KOM points out on course (a 5th if you include the finish) so no doubt we’ll see Phinney try to get into the morning break and defend his lead in that competition. However, it’s not just the categorised climbs that will sap the legs of the riders, there are several uncategorised bumps for them to deal with as well.

It all depends on the pace of the peloton but it could be a more wearing day than expected.

We might see a couple of riders try an attack within the final 10km if the break is brought back but more than likely it will come down to a battle up the final climb. 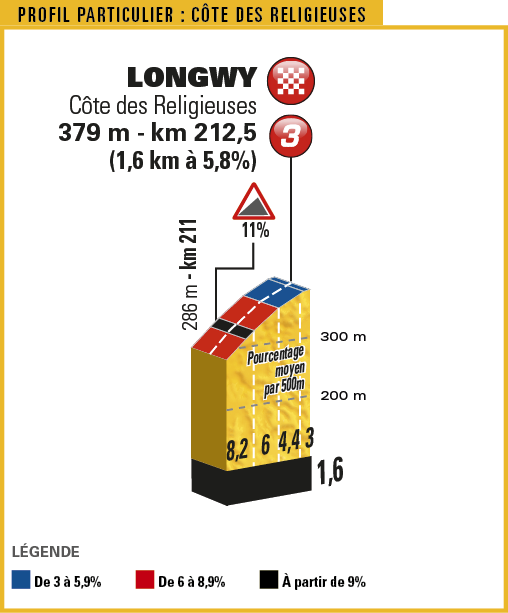 At first look at the official profile I thought some of the tougher sprinters would have a good chance on a finish like this as they would carry a lot of speed into the climb due to the descent that ends with roughly 4km to go.

However, there actually appears to be a small rise just after the descent that we don’t see on the official profile.

Not long at 500m, it does average ~6.8% and it could be another springboard for someone to try to catch the peloton out.

Furthermore, the road seems to rise almost from the 4km mark on the above graphic to the finish line. Using the numbers from that, the final 2.4km average 5% which definitely makes it too tough for some sprinters!

It reminds me of the finish to Terme Luigiane (Stage 6) at the Giro this year, although that day is inverted to this one with the tougher gradients coming right at the end, whereas the steeper slopes come at the bottom tomorrow.

The difference from that day is that the run in at the Giro had a few slightly harder climbs, but fewer of them. You would also expect the riders to be a lot fresher here as those at the Giro had already climbed Etna two days before.

This is a really tough one to call.

Originally, I had this down as a nailed on Sagan stage like I’m sure a lot of people did/still have! However, since looking at the finish more I think it could be on the limit of the World Champion. No doubt he will be there or thereabouts but on a finish like this, Matthews looks like a better contender to me. The Australian is a better climber than him, although slower in a sprint, but this is nullified due to the uphill nature of the finish.

We could of course see someone attack early and try to catch the bunch out, looking at you Wellens, but it will be tough for any move like that to succeed.

The more I think about it though, the more I liken this finish to Amstel Gold Race of old where the day ended right at the top of the Cauberg.

Therefore, I’m leaning more towards puncheurs for the stage. In fact, I think with all of the climbing in the day beforehand, we might even see some GC riders put their nose into the wind.

As there are a lot of possible riders who could win tomorrow I’m only going to name a few, so apologies if I miss someone out you were hoping for.

The King of the Cauberg, Gilbert is here and I imagine he will be given free rein tomorrow to chase the stage. In remarkable form this Spring, he returned to racing towards the end of May and looked as strong as he did before his enforced break. I’ll be very surprised not to see him feature in the top 10 tomorrow! 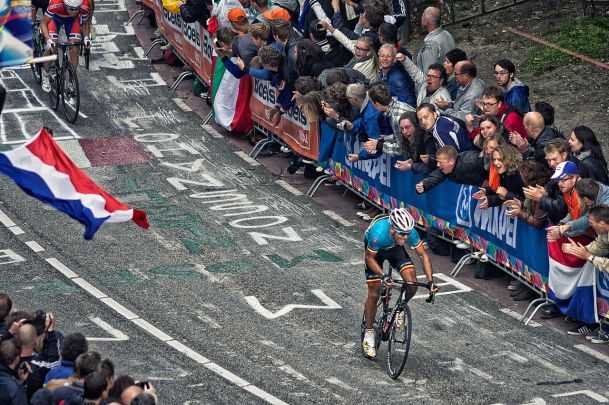 Van Avermaet also has to be considered a favourite for tomorrow and is another rider who had a spectacular spring campaign. The climb could be on his limit but I think his one-day prowess should see him there or thereabouts.

Away from those two though, I think we could see a few “surprise” names in the mix. I really think it will be quite a selective day so here goes my trio of “outsiders”…

The Colombian tore the race to bits at the recent Hammer Series and rode a very solid Tour de Suisse, coming home in the top 20 on GC. Great for him considering where he was at the start of the year! Here to rider the race in support of his leader, I think he may just be given the nod to go for it tomorrow. The climb suits the Betancur of 2014/ down to the ground and I think we could see him fly up it like he did at the Hammer Series. I’m sure a lot of fans would love to see that! 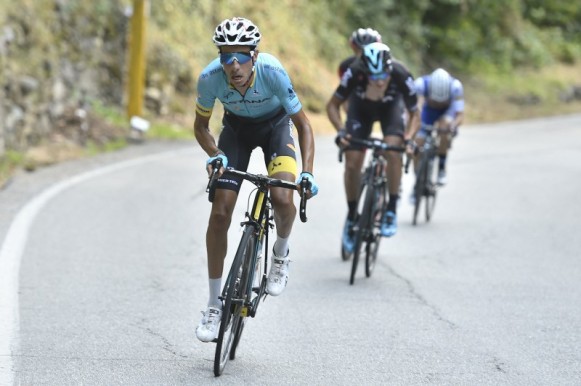 After winning the Italian Championships last Sunday the Astana rider will be full of confidence. He’s looked back to his 2015 best as of late, packing a real punch when he attacks out of the saddle. The finish might be too easy for him, but given his aggressive nature and the fact he already finds himself 40 seconds down on Froome, he could well test the water. If so, he is a real danger for the stage.

Not here for GC and only stage hunting, supposedly, tomorrow looks like a good day for the Frenchman. His form is a bit unknown as he’s only completed the French TT Championships after his efforts at the Giro d’Italia. Nonetheless, he is arguably one of the fastest out of the GC guys so if it becomes a really selective gallop to the line then he has a great chance of winning if his legs are good.

Having been let loose from the shackles of my season-long fantasy team after scoring me 0 points in the first few months, Betancur will repay me here and take the win! 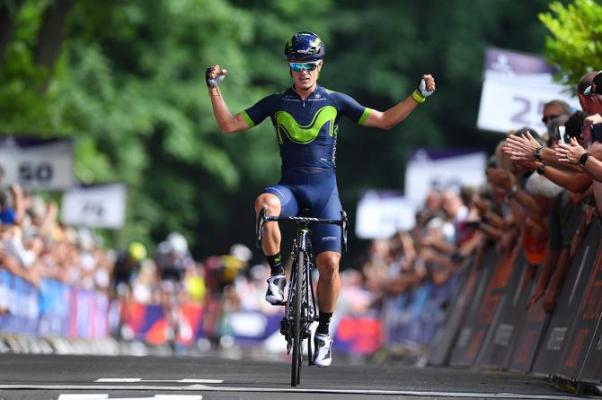 I mean someone from Movistar has to do what Valverde would have done?!

Thanks as always for reading and any feedback is greatly appreciated! Who do you think will win tomorrow? Is it as tough a day as I think or have I read far too much into it? We should be in for an exciting finale either way. Anyway,