Luck, bravery and a stonkingly strong effort from Thomas saw him take Yellow at the end of a very tricky and tough day. 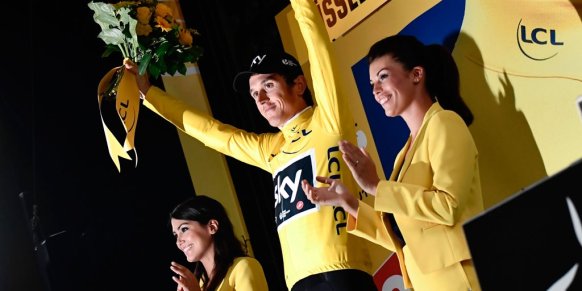 Don’t think many people would have predicted that!

Küng and Kiryienka rounded out the podium, with Froome being the best GC rider (not including Thomas of course), beating his closest rivals by around 25 seconds.

It was a course fraught with danger due to the wet and greasy surface which unfortunately meant several riders crash. The #HaugheyCurse already managed to rear its head on stage one with Roglic going down and ruling him out of stage contention. However, more disappointingly we’ve had two abandons in the form of Valverde and Izagirre, both of whom were top 10 contenders for the overall at the very least.

The organisers will be looking for a much more mundane day out tomorrow. Let’s have a look at what’s in store for the riders.

A fairly flat day out where the sprinters should get their first chance to go for stage glory.

We should see a fairly exciting start to the day as several riders will no doubt be gunning for the early KOM. After that though it should be a fairly benign day as they travel through Germany until the terrain starts to get more rolling once they enter Belgium and the province of Liège. 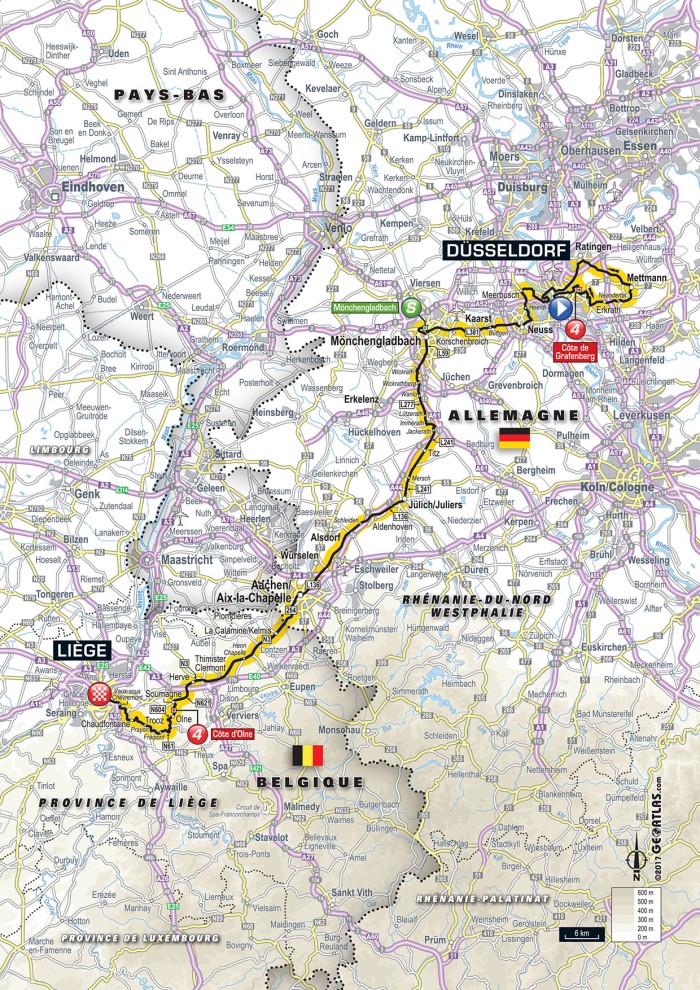 We do have some uncategorised rises and a Cat-4 climb that crests with 20km to go but they should be of no difficulty to the fast men.

The run is a sprinters delight and I’m sure the GC riders will be happy with it too, no first road stage nervousness!

Facing a few technical turns, the biggest difficulty is a right-handed turn at 3km to go. After that, it will be a drag race between the lead-out trains with the final kilometre being dead straight.

Strong enough to create some echelons when the route is heading South/South-West (so most of the stage), I will be intrigued to see if any team tries to split it in the wind.

It’s quite hard to tell how exposed some of the course is due to the strange reason that Google Streetview hasn’t covered any of the area south of Mönchengladbach. Can anyone tell me why?!

Looking at the satellite images, it appears like flat German farmland that could be fairly exposed to the wind.

As for when the riders enter Belgium, we have typical small Belgian towns, some exposed roads but some fairly well sheltered.

I think it’s unlikely we’ll see any splits but you never know. Some teams/riders are already facing an uphill battle on GC so if they sense any opportunity they’ll go for it.

The first sprint of a Tour is always an interesting one as riders/teams aren’t sure of what to expect. Everyone will fancy their chances so it often leads to a rather chaotic finale. It will also be a cross-headwind finish so timing your effort will be important.

Marcel Kittel starts as the favourite for the day. The German has a team built to support him and it is arguably one of the longest proper sprint trains that we’ve seen in a Grand Tour since the HTC days. Quick Step will be able to put the power down in the closing few kilometres and with Sabatini (Kittel’s trusted lead-out man) dropping him off at 150m to go, will anyone be able to beat him? 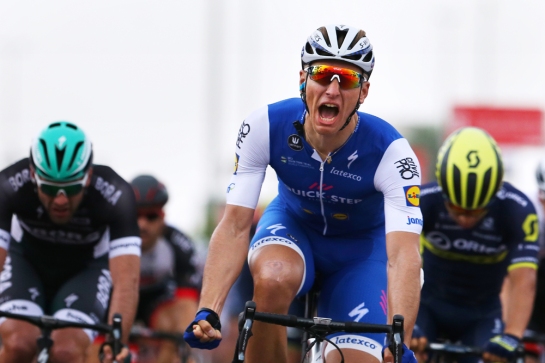 Arnaud Démare on current form looks like his main challenger, with the Frenchman dominant in his last few races. The reason I said “arguably” for Kittel’s lead-out is that Deémare will have everyone in his team apart from Pinot working for him. The signings of Cimolai and Guarnieri have really brought some high-end speed into the top end of the order. He might not beat Kittel when the German is up to full race speed but since he’s not raced in a while, Démare has every chance. I’m sure he’ll be doing his rain dance too!

Peter Sagan will be close to the top of the order, like always! He really seems to up his game in the sprints at the Tour and is one of the fastest riders here. Sagan doesn’t really have a lead-out train to the same extent as Kittel and Demare do but he still has some fire power. Selig will be his last man and he’s a rider who I’ve really rated this season, he’s done great work for Bennett etc, so he’ll be expected to continue that for Sagan here. Can the World Champion make an early claim for Green with a win?

Andre Greipel is a bit of a hit or miss character in the sprints recently and I think it is clear he’s sorely missing Henderson. Lotto Soudal shortened their lead-out train on the final day of the Tour last year and it seemed to work for them then so they’ve taken a similar approach this year. He’ll more than likely have to latch onto the back of someone elses lead-out and I think it will be tough for him to take the win, but he is certainly strong enough on his day to do so.

Mark Cavendish is the unknown quantity. He says he doesn’t know where his form is, although he most definitely will, and I’m intrigued to see how he copes. With a strong lead-out, he is almost capable of anything tomorrow. I would not be surprised with a win or if he was nowhere.

Dylan Groenewegen has the speed and fearlessness to get himself a podium position. He recently beat Kittel and Greipel at Ster ZLM so will be full of confidence, although he did struggle at the Nationals recently. I think he would prefer the finish to be a bit more technical. He has a chance but it will be tough!

As for the rest, they should be there or thereabouts but I think it will be hard for them to win.

Arnaud Démare to take advantage of his fine form while he can and take the win, sending the French public/media into disarray!

As I said yesterday, today was most likely to be a no bet and it will remain that way. Almost tempted with a couple of loose change punts on Naesen and Lutsenko at crazy prices and do my wind dance. I think I’ll save my money though to waste on future stages!

Thanks as always for reading and any feedback is greatly appreciated. Who do you think will win tomorrow? Can anyone beat Kittel? Anyway,