The peloton finally decided to work together to catch the break, although from reading online reports it was in the balance for a while. Nonetheless, everything came down to a large bunch sprint and it was the blog’s pick for stage 3 who came good; Phil Bauhaus. A couple of days late but it’s good to see the young German taking his first (of many?) World Tour win. 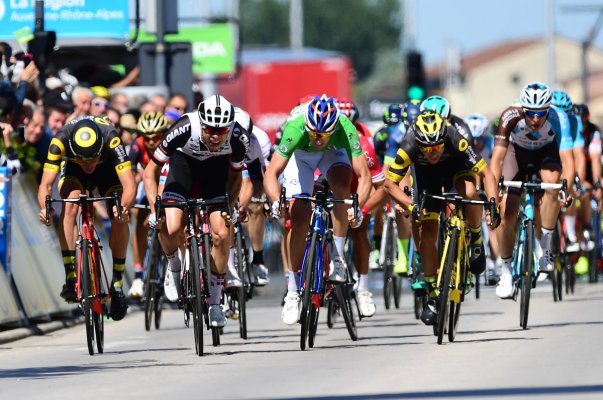 Démare continued his good run of form with a second place, with Coquard rounding out the podium.

The attention now switches to the GC riders and climbers of the peloton as we come to the business end of this race tomorrow. Let’s have a look at what’s in store for the riders.

A relatively easy day out in the saddle to start off with before the riders have to tackle one of the hardest climbs in France!

We could see a tough fight to get into the morning break along the flatlands at the start of the stage, or it could go from the gun. It’s one of those days! The first test for the peloton will be the Cat-3 Côte de Corlier but it won’t really have any impact on the stage. The road then rolls a bit, going through the feed-zone before the peloton can stretch their climbing legs/get warmed up again on the Côte de Jongieux. At 3.3km long and averaging 5% it’s not tough. However, considering there are only 5.5km from the summit to the bottom of Mont du Chat, then I expect it to be attacked at a fast pace as the GC riders look to position themselves before the monster of a climb. Speaking of which… 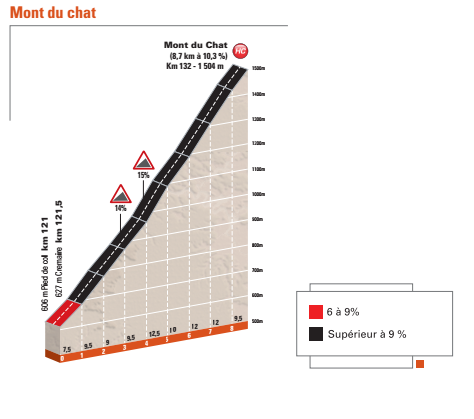 It starts off with an “easy” kilometre of 7.5%, before never dipping below 9% for the rest of the climb. My legs hurt just looking at the profile!

We have max gradients of 15%, but I think it will be the 6th and 7th kilometres where the damage will be done. For those two kilometres it averages 12% and a lot of time can be made here if you’re stronger than your rivals, before it “eases” back down to 9.5% in the final kilometre of the climb.

Once over the top the riders will plunge down the other side on a descent that starts off quite technical, before getting easier around 2/3rds down the climb. The final few kilometres are almost pan flat as we head into the finish town.

Will this scupper the chances of a solo rider taking the win?

If we do get a small group arriving together at the finish, taking the quicker inside line will be important!

There is a chance the breakaway wins, but I think that’s unlikely considering the GC teams will be fighting for position a lot during the day. Furthermore, with bonus seconds on the line, they will want to give themselves as big a chance as possible of beating Porte in the overall.

Therefore, we’ll see a big GC battle on Mont du Chat with all the favourites coming to the fore!

Valverde – On a stage with a descent almost all the way to the finish line but with a flat final 2km, the imperious Spaniard probably has to start as favourite. If he can hold onto the better climbers, he could potentially drop them on the descent or at least out-sprint them at the finish. Saying that, the way Valverde has been climbing this year, it would not surprise me to see him attack everyone on the climb. A strong TT is an indication that he is still in very good form just now!

Contador – Similar to Valverde, El Pistolero delivered a better than expected TT which highlights that he is going well despite saying that he isn’t too bothered about how he does at the Dauphiné. It’s almost guaranteed that he will attack on the climb, but will it be enough for him to get away? If not, he’ll have to play it cannily as they approach the line as he doesn’t have the best sprint…

Froome – Relatively disappointing in the TT, the Brit has had a “poor” season by his standards so far. Maybe he didn’t want to give it his all in the TT, bluff a bit and not take any risks? But on a course that wasn’t too technical, I think that the power just wasn’t there. I could be wrong though and he could well turn it around. I think he doesn’t care for this race too much and it’s all about the Tour for him!

Porte – GC rider of the season, he blitzed everyone on a relatively flat TT so for him, the power is clearly there. Ridiculously impressive on short 15 minute climbs, I’m intrigued to see if he can sustain the Watts per Kg for a longer effort. He managed that in Paris-Nice and with the way he is riding just now, I can see him doing it again.

Obviously those who struggled in the TT might have a chance of stage glory due to being further down on GC and not an immediate threat.

Bardet – A demon descender the Frenchman will not hold anything back on the downhill sections. He’s also not afraid to attack on the uphill and I think we’ll see him try to go early.

Martin, Yates and Aru could also find themself in a similar position!

Originally I thought this stage would be great for someone like Bardet. My mind then switched to Valverde. But the more I think about it, the more I think we’ll see Porte ride away from everyone on Mont du Chat and cement his winning position in this race. He has been truly incredible this season, his power output has been amazing. He just needs to stay upright on the descent because I think we could see him crest the summit of the climb with a 30 second advantage. 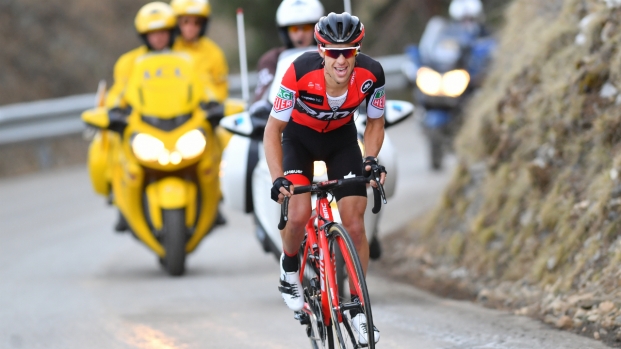 Thanks as always for reading! Who do you think will win tomorrow? Will a “lesser” GC rider manage to escape or will it be ont of the leading contenders? Anyway,