We did end up with a big bunch sprint and it was Arnaud Démare who powered his way to stage victory, winning by a comfortable margin in the end!

Kristoff and Bouhanni rounded out the podium. A good result for the Frenchman considering the crash he suffered in Yorkshire not so long ago.

As for the blog pick of Boasson Hagen, he was up fighting in the top 10 riders in the closing kilometres but unfortunately went backwards/lost position at the wrong time. He eventually recovered to finish 6th and I’m sure he’ll give it another go tomorrow!

Another rolling day but the easiest stage so far. 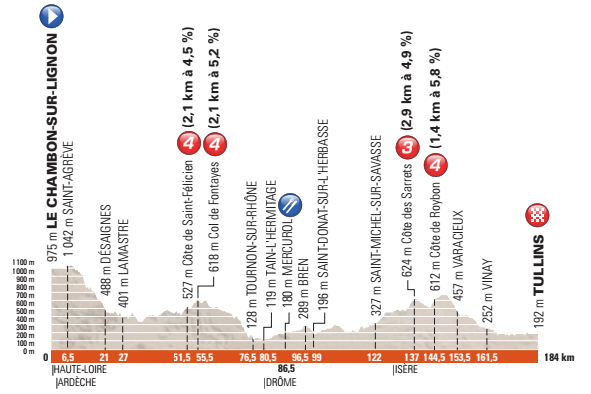 We have several small climbs out on course but the last one (Côte de Roybon) comes too far from the finish line to be of any detriment to the sprinters.

The run in to the line is fairly simple as well, much to the delight of the sprint trains. 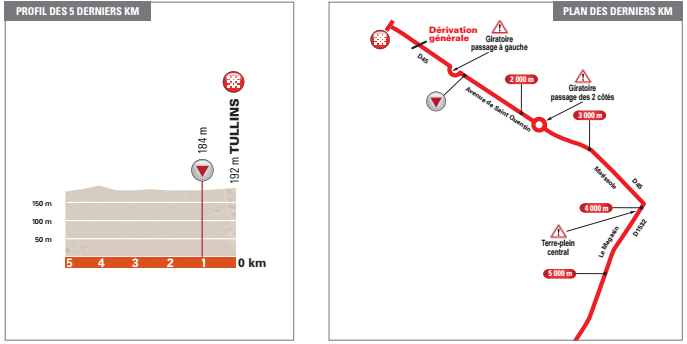 There are a couple of roundabouts to traverse, and the one taken at just after 1km to go could cause some issues but aside from that there are no other difficulties. The road does rise ever so slightly in the last kilometre but it’s only at 0.8% so it should make no real difference!

On a relatively easy day, the one thing that could derail the sprinters chances is the weather.

It looks as if we will get rain at some point during the stage but it should have disappeared from the finishing town (where the above forecast is from) by the time we reach there.

However, slick roads could lead to a more nervous peloton!

Nonetheless, it should end in a sprint.

We’ll have all the usual suspects competing for victory.

Can Démare double up? He certainly looked very strong today and his two-man lead-out timed their move to the front perfectly. It is a move we’ve seen them do quite a bit recently: his win over Bouhanni in GP de Denain was very similar. Having his best season so far, I would not be surprised to see him on the top spot of the podium again.

Kristoff did well to get up for second but that was mainly thanks to his great lead-out. He never seemed to have the kick to match Demare when the Frenchman launched his sprint. In my opinion, he still doesn’t look back to top form and if he’s out of position I can’t see him coming around anyone. Nonetheless, he is a great sprinter so can’t be discounted!

Bouhanni looked fairly strong today but I think he benefited greatly from following Demare up the inside line, using his compatriots slipstream. I’m still not convinced his form is fully there yet but you can never discount Bou-Bou. 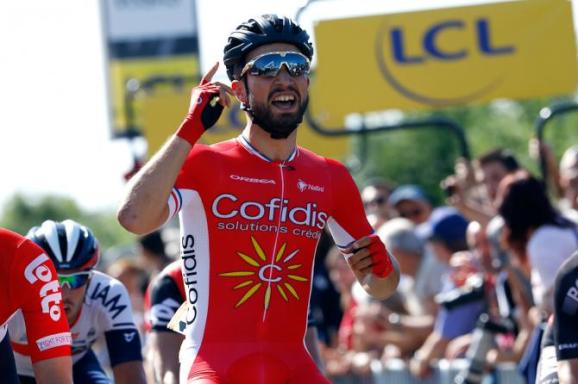 Colbrelli and his Bahrain team looked strong in the final 5km but they seemed to run out of steam at roughly 1km to go. The Italian managed to finish strongly but I think he would need a tougher finish than the one we have tomorrow.

Bauhaus impressed me today, as did his Sunweb lead-out train. Like Bahrain, they seemed to come to the party early, but were one of the teams with the most numbers in the closing kilometres. If they can get the timing right tomorrow, I think the young German can spring a surprise, he was finishing fast today!

Ackermann, Swift, Boasson Hagen, Coquard and Richeze should all be in or around the top 10 again.

It will be tough to beat Démare as he seems to be in great shape at the moment. Nonetheless, I still think he can be beaten and I’m looking towards a team buoyed by confidence at the moment to do just that.

Bauhaus appears to have the speed to match the best and if his Sunweb team can lead into and through the final roundabout with a few guys ahead of him, I think he is able to challenge for the win. Using those Giro legs to his advantage!

Awful price for everyone, but at least it gives an interest

Thanks as always for reading and as usual any feedback is greatly appreciated. Who do you think will win tomorrow? Apologies again for the shorter preview, but there’s not really much extra to say anyway! I’ll have two previews out tomorrow; Dauphine Stage 4 and my OVO Women’s Tour Stage 1/GC Preview.

Speaking of which, join my Velogames.com league for the Tour, use the code “05185053” to gain entry. No prizes on offer, just pride!