So apparently I missed a lot while sleeping this morning after work!

I woke up to see the riders on the final climb and Dumoulin slowly losing contact, but a quick scroll down Twitter also suggested that something else happened earlier in the stage. Either Dumoulin lost time and was gapped on a descent or the others attacked him while he was stopping for a nature break. Reading what the Sunweb director said, I think it was the former.

Up the road, Landa finally took a deserved stage win while simultaneously securing his KOM jersey.

With Costa and Rolland following him home.

We did get some GC gaps and Quintana moves into Rosa after Dumoulin suffered on the final climb. Pinot has handily moved himself up to within a minute of Quintana and his certainly not out of it either. We should be in for an interesting final two days.

Let’s take a look at what’s in store for the riders tomorrow.

A tough day out but certainly not the hardest that the riders have faced.

We have almost 100km of flat before we get the start of the climb to Monte Grappa.

At 24.1km it’s long but only averages 5.3%. However, that doesn’t tell the whole story as the first 8.5km of the climb averages 7.8%, which is certainly difficult enough to shed some riders out the back of the group.

The only issue with that is once we get to the summit of the climb, there is just under 70km to go to the line. With no Contador here, I think it’s unlikely we’ll see any kamikaze GC attacks on Grappa but you never know. I would love it if there was!

The riders will have to tackle a descent that is as long as the climb they’ve just been up, before traversing some valley roads to reach the foot slopes of Foza.

A more regular climb than Grappa, Foza averages 6.7% for 14km. It is long/steep/close enough to the finish to put some riders into difficulty.

The only issue for some riders is that we have a 15km section of undulating road after the peak, with the last 5km being downhill. 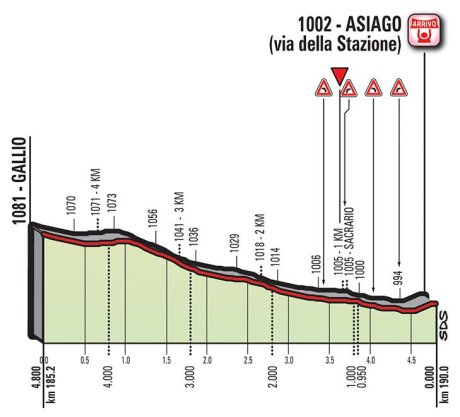 I’m sure a few riders will be happy to know that the downhill isn’t too technical aside from the last kilometre where it starts to flatten out anyway.

Another day where we have the conundrum of break or no break?

The first 100km of the stage in theory are easy to control for a team but who will take up the mantle? The onus will obviously be on Movistar to set tempo for the stage but Quintana has looked underwhelming so far this race, although he has managed to get into Pink!

Nibali today didn’t look great either, shipping a couple of seconds on the line. In fact, the two riders who looked the strongest were Pinot and Zakarin, both of whom are very much in podium contention now.

Are any of these teams dedicated/strong enough to set tempo all day to keep the break within touching distance?

I think they’ll see how the race unfolds on the day and if the break is within touching distance over Monte Grappa, they might start pulling. If not, I think it will be another day to play…

The flat start makes it a difficult stage for the climbers to get into the break so we might get a mixed bag.

As I’m losing the will to live in terms of recycling names for this, I’ll come up with a couple of new names;

The Italian was very strong in helping Landa on Stage 18, driving the break for the majority of the first three climbs. With the Spaniard now having a stage win and the KOM secured, Sky will now most likely turn to their other riders and give them a few opportunities. Rosa is strong enough on the flat to make the break, but he is an exceptional enough climber to win from a group as well.

With a stage win already in the bag, Fraile can go into this stage without any pressure. Brutishly strong on the stage he won, the Spaniard has the engine to join the break on the flat, but also the climbing ability to win. An attacking rider, he certainly won’t give up if he makes the move, taking the approach of finishing last is the same as 2nd.

I think it will be hard to drop a lot of the GC favourites, but as I said above, Zakarin and Pinot look the strongest just now. In theory, the “flat” final 15km should suit those two and I wouldn’t be surprised to see them attacking over the top of Foza when the lighter climbers are isolated and weak.

If we do get a GC battle, I’ll go for a Zakarin win.

However, I think we’ll once again see a race on two fronts and the break will stay away. Sky will take back to back wins, with Diego Rosa coming out on top. 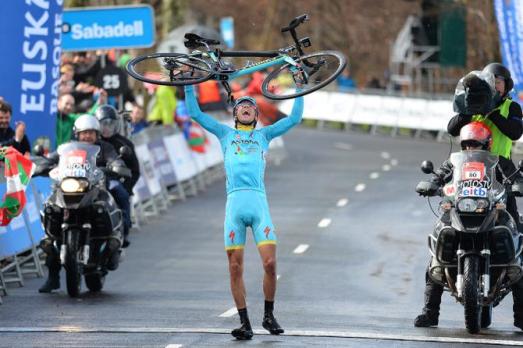 The usual 2pts spread across the break duo as odds on Zakarin won’t change much when they go in-play.

Thanks for reading as always. Apologies that this is shorter than normal but I’m suffering from preview burnout! Who do you think will win tomorrow? Anyway,