A hectic stage that was perfectly poised all the way to the finish line. In the end, the breakaway managed to just stay away, with Tejay Van Garderen taking his first ever Grand Tour win, pipping Landa who finished second yet again after being forced to lead-out. 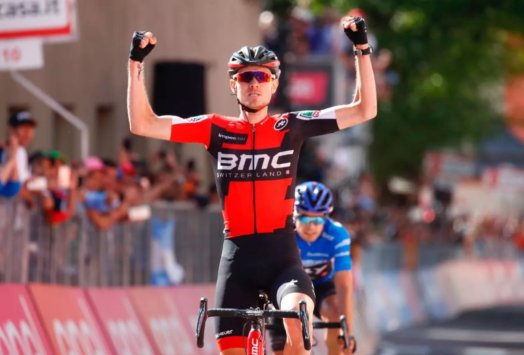 It was great to see TVG win, and much like Rolland yesterday, it is almost like a redemption ride/performance from them.

Behind, Pinot came home third to claw some time back on his GC rivals and move within touching distance of the podium.

As for Dumoulin, he looked effortless today even giving it a little nudge himself. However, unfortunately for the punting side, he ended up just riding a relatively defensive race in the closing couple of kilometres. I would really have liked to see him go full gas after his attack with about 5km left, but it was not to be!

Quintana and Nibali looked cooked/not strong enough. I noted that it was the first time I’ve seen the Colombian with his jersey unzipped so he must not be feeling 100%. They both just rode to mark Dumoulin in the end and both are now under threat from Pinot/Zakarin.

Dumoulin himself said in a post race interview that he would be happy if they lost their podium slots because of that. Nibali fired back by saying that there is karma and that Dumoulin will pay for what he said on the road.

The Giro is simultaneously hotting up while also cooling down, as I think the Dutchman has it in the bag barring any major misfortune.

Anyway, let’s have a look at what’s in store for the riders tomorrow.

A long day in the saddle at nearly 191km. However, compared to some of the previous stages, it’s a relatively benign day out for the peloton. 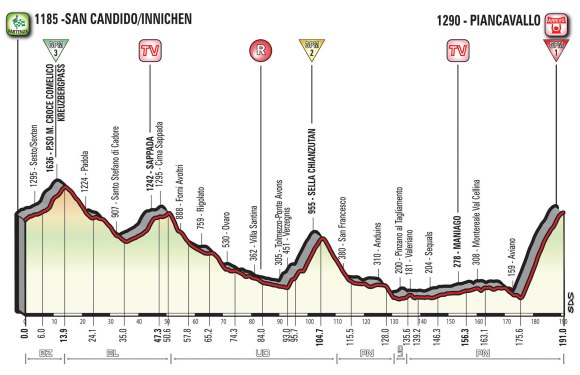 We start off with a Cat-3 climb. Although, the riders will be climbing from the gun and taking it as a whole the climb is 13.9km at 3.2%, with the categorised segment coming in at 7.9km at 4.3%, but that does include some steeper ramps.

We then have a long descent that is interrupted with the rise for the intermediate sprint point, before the road once again continues downwards to the foot slopes of the second categorised climb of the day. 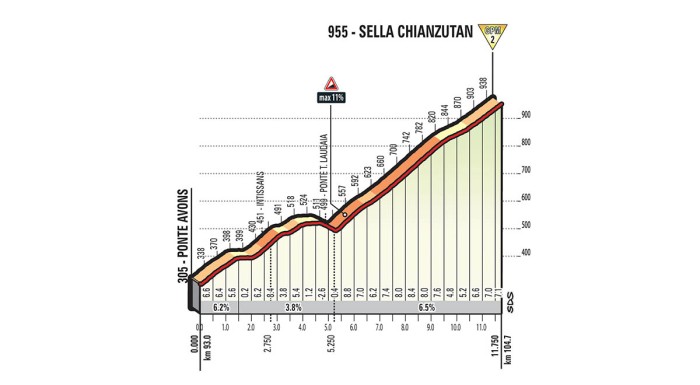 A relatively long climb, the average gradients are quite deceptive due to the several sections at less than 5% and there’s even a bit of downhill thrown in. A lot of the actual climb is closer to 7%.

Will we see any movement in the breakaway here? It is certainly too early for any of the GC guys to come out and play.

From the summit, it is another 70km before we start the final climb of the day. 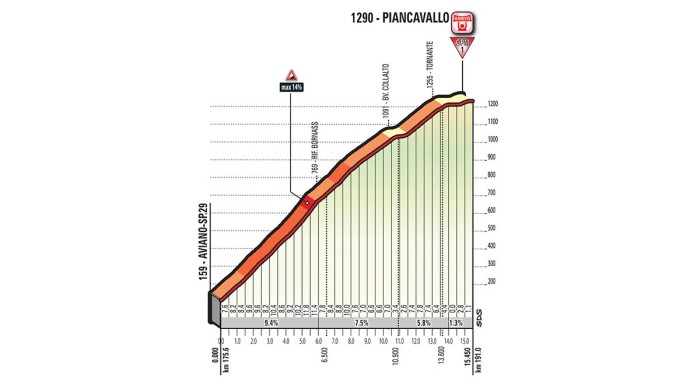 At 15.4km long and averaging 7.3%, the Piancavallo is a brute of a climb. The steepest sections come in the first 6km so it will be interesting to see if a team really drills it from the bottom. It does start to ease ever so slightly within the final 5km but there are still some steep enough gradients (7%+) to launch an attack.

After today, I think a few of the GC favourites will be demoralised, namely Quintana, knowing that Dumoulin will be tough to crack and instead they might change their focus to stage wins.

Nibali might want to get involved in a dick-measuring contest with Dumoulin after the comments that they both made but I think Nibali knows he only has a very slim chance of dropping Dumoulin.

It will take a lot of effort from a team to control the stage all day to set it up for the final climb so once again, I think we’ll see a breakaway rider take the win.

How big will the break be? Well that depends on where it goes and it once again could be another 20+ rider day.

Like normal though, I’ll throw a few names into the hat to watch out for (or not, as they inevitably won’t make the move).

Anacona – For what I think is the third time in the space of a week, I’ll name the Colombian as a contender for the stage. He’s made the break on at least two of those occasions but has been called back to work for his leader. However, after today’s stage and Quintana underperforming, I think he will FINALLY be given the freedom to actually chase the win. Clearly one of the top 15 climbers in the race at the moment, he has a very good chance if he makes the break.

Carthy – We’ve not seen much of the Brit so far this race, his best finish position being 21st on Etna way back in week one. However, I think that’s probably due to him attempting to save himself for the final week. Cannondale have been very active in the breakaways the past few stages and I would not be surprised to see a few of them up the road again tomorrow. 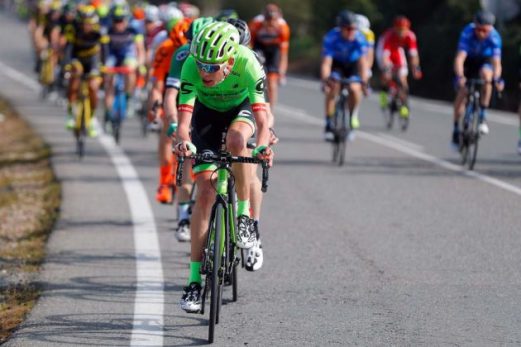 Woods – The other Cannondale rider to make my list, he was instrumental in Rolland’s win on stage 17, marking all of the other contenders to help his team-mate grow his advantage. Like Carthy, Woods took it relatively easy today, coming home over half an hour down on eventual stage winner Van Garderen. The punchy Canadian should enjoy the steep ramps of the final climb but does he have the endurance to match?

Rodriguez – Another rider to make his return on this list. I was very impressed with the Wilier rider at the start of the race, but he has been a bit anonymous recently. Fatigue or saving himself? I’ll hope for the later! A talented bike rider, he was 10th at the Tour de l’Avenir last year but seems to have taken a step up this season. Is a big win on the cards?

Just as I’ve finished writing this I see that there are rumours circulating on Twitter that Quintana and Nibali will form a pact to try and beat Dumoulin.

Hmmm, I still can’t see that happening/ending well for them and I’m not convinced that both teams will work on the front all day, draining their resources. Especially when you consider that Dumoulin really just needs to follow them and ride defensively.

So with that said, I still think it will be a breakaway win and I’ll go for arguably the strongest Colombian to take the win…

I mean, I can’t not use that picture of him again!

Behind, we might see some GC fireworks but Dumoulin won’t lose the jersey.

Small stakes again for interest on the breakers (All 365);

Thanks as always for reading. Who do you think will win and how? Anyway,