There were a flurry of attacks near the end of the stage but it came down to a sprint.

In the end it was easy for Bouhanni, who took a very comfortable win.

With Ewan taking second, just ahead of the early sprinting Hivert.

All still to play for tomorrow, let’s have a look at what’s in store for the riders.

What a stage and the toughest in this race’s short history!

The road is up and down all day with barely any respite for the peloton and not to mention the stage is nearly 200km long!

With 4 categorised climbs early in the day, the race could well be split up before the half-way point. It all depends on how aggressively the peloton decides to attack the day.

There is a potential for the race to lull in action in the middle section of the day, but the parcours is still challenging.

The final 20km is a killer though and once they’re through the Intermediate Sprint in Stocksbridge they are either climbing or descending all the way to the finish line.

If the race hasn’t been blown to smithereens already, it will be after these 4 climbs and I’ll be very surprised if we see more than 3 riders come to the finish line together.

Speaking of which, it’s not exactly an easy closing few hundred metres… 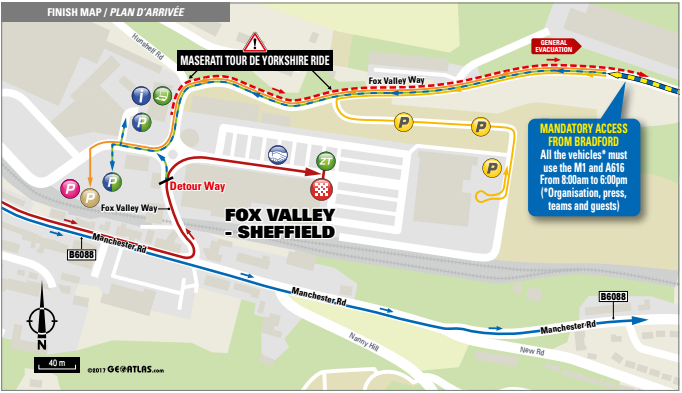 Things could get dicey if we see a few riders arrive together.

It looks as if it’s meant to be a dry but overcast day in Yorkshire. Although at this moment in time, there are supposed to be showers in the area in the late evening so that forecast may change quite a bit come tomorrow.

Nonetheless, it’s not the rain the riders will be overly concerned about: it’s the wind!

Although not as exposed as some of the racing was on the opening day, there are still plenty of opportunities for teams to try and split the race in the wind.

Such as this one after Leeming.

Here’s hoping some teams do just that and make it a crazy day out in the saddle.

To have a chance of winning here a rider will have to he a strong climber but also good in classics types races, so that they can position themselves well in the crosswinds.

It’s hard to tell where riders are in their season in terms of performance and some will certainly go better than expected, while others will turn in a poor or disappointing result compared to what they were expecting. Just getting my excuse in early for this preview… 😜

As I’m short of time I’ll throw a few names into the hat.

The American is arguably the in-form rider in the Yorkshire peloton after recently finishing 11th on GC in the Alps, nabbing a second place on Stage 5 along the way. A good punchy climber who packs a decent kick, he’ll want to try and get rid of some of the more established names in the bunch before the final 4 climbs. He certainly has a good chance though!

The young Brit looked sprightly enough at the end of stage 1, chasing down Voeckler’s half hearted attack with ease. However, he was one of the unfortunate riders to be involved in the crash in the closing straight. The wounds seemed to be superficial and Sky will be hoping their young prodigy can make the most of his lightweight frame on the steep climbs of Yorkshire.

I’m like a broken record this week, with the Italian getting his third mention in my previews. I mean, it would be rude not to include him again?! Not having raced for a while, he’s had the opening two stages to re-find his form and get up to race speed. In a field that’s not stacked with big named climbing talent, he could surprise.

The One Pro rider is a very handy climber, finishing 11th here on GC last year. He’s not shown as well in this race so far and was one of those to be collected in the stage 1 pile up, but he suffered no injuries. I think he might be able to spring a surprise tomorrow!

One other name I’d like to throw into the hat is Maurits Lammerink. The Katusha rider in theory should enjoy this type of stage as he has gone well on steep ramps in the past. He’s not been great so far for his new team this season, but a 25th in Fleche highlights that the form might be coming.

The likes of Kruijswijk etc could feature as well but I think he might keep his powder dry for the Giro.

If you’ve read this blog for a while, you’ll know exactly where this is going…

It is a bit of a lottery of a stage which should hopefully make it a great watch.

Not going wild, so…

Thanks as always for reading and apologies again that this is a bit shorter than normal. Who do you think will win tomorrow and what race situation will we see into Fox Valley? Anyway,