The much more exciting race tomorrow, the women’s edition of La Fleche is often an attacking day in the saddle with the peloton blown to bits over the closing climbs.

Last year saw the peloton split from far out and we only had around 30 riders left in contention with 40km left. There were a flurry of attacks throughout the afternoon but a group of favourites managed to break clear on the penultimate climb of the day (Côte de Cherave). Before Van der Breggen made the most of the Rabobank numbers at the head of the race, escaping at just over 2.5km left only being followed by Stevens. Those two held on and it was the Dutch rider who took the win for the second year in a row. 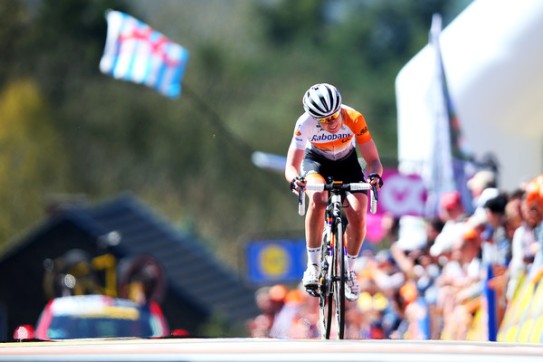 Behind, Guarnier rounded out the podium.

Will we see another attacking race this year? Let’s have a look at what’s in store for the riders.

Similar to 2016 apart from the organisers have decreased the length by 17km which makes it one of the shortest events on the calendar at only 120km in total. 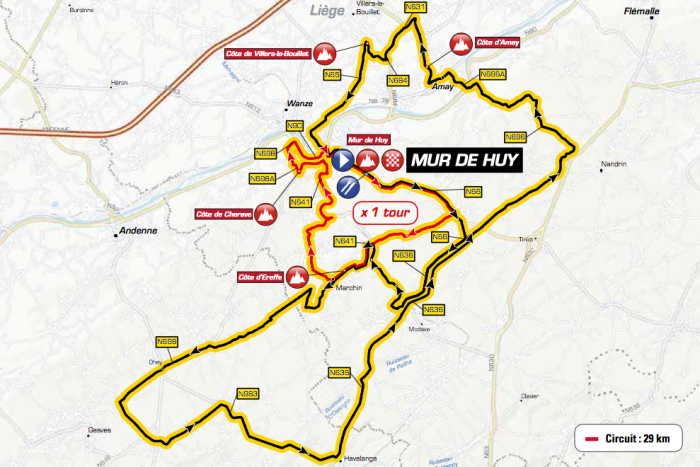 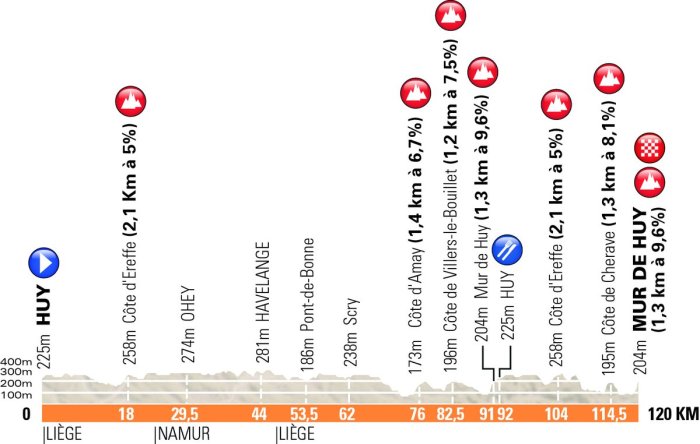 We could see the race split up from far out again if the pace is increased over the Côte de Villers-le-Bouillet. Not a long climb, it was enough to do the damage last year when Deignan pulled at the front all the way up.

From there, we have one passage of the Mur de Huy, before the same closing circuit we see in the men’s race.

The Côte d’Ereffe comes at an awkward time in terms of race placement but it does have the potential to be a springboard for a move. However, I think the day will once again be decided on the Cherave and the run in to Huy. Boels will use their strength in numbers and hope to isolate some of the other favourites, leaving the door open for a similar attack to last year.

The small group of escapees will then tackle the Mur and the strongest woman on the day will win! Well, the strongest from that group so they’ll also have to be tactically astute too.

It seems Boels plan of taking it easier in the first month of racing so that they can peak for this week is going to plan. After landing a 1-2 in Amstel, they arrive at this race as hot favourites to take another win. They’ll be thankful to have Anna van der Breggen on their team this time as she looks like the rider to beat. I did say in my Amstel preview that she looked good at the Healthy Ageing Tour and she did not let me down, taking a superb victory on Sunday! This type of finish suits her perfectly and she has a good chance of taking a third win in a row.

If not, team-mate Deignan certainly has the abilities to be a great second option for Boels. She was strong in Amstel and rode a perfect, tactical race to help set VDB up for the win. The short punchy climb is on the limit for the Brit but in her current form, I wouldn’t bet against her!

WM3’s Kasia Niewiadoma looks to be the biggest threat to Boels here. The Polish rider was impressive in Amstel, like she’s been all season but struggled due to the lack of team support as she can’t be expected to cover every move. Unfortunately, the same could well happen here but she has a very good chance if she comes to the bottom of the Mur with someone. A rider from Rabobank has won this race the past 4 years and as WM3 is the next incarnation of that team, can they make it 5 in a row?

Orica have a few riders who could go well here and they will hope to have numbers in the front group towards the end of the race. Van Vleuten was up there in Amstel on Sunday and will look to challenge here again. She seems to be in great form at the moment and the punchy climb will suit her. Team-mate Garfoot would probably prefer a longer, more gradual climb, but the Aussie champ can’t be discounted.

Ferrand-Prevot hinted at a return to form with her 8th in Amstel and as a former winner of the race, she knows what it takes to be successful here. The 2014 World Champion has struggled to replicate that year but she has every chance in the right group. However, I think that there will always be someone just better than her. I’m happy to be proved wrong though!

Van Dijk could win for Sunweb but I think she might have to attack solo before they get to the Mur as the climb is on the limit for her. Nonetheless, she has been exceptional this season and the form is certainly there for her to spring a relative surprise. As for her team-mate Rivera, she’s improved massively on the climbs this season but this will be too hard for her. We saw her get dropped on the Cauberg in Amstel so you wouldn’t expect her to cope any better here!

Aside from those riders, I can’t really see anyone else take the victory but honourable mentions go to Lichtenberg (Wiggle), Gillow (FDJ), Beggin (Astana), Moolman (Cervelo) and Ensing (Alé).

Van der Breggen and Boels to win again this week, with the Dutchwomen taking her third title at this race and setting up the potential Ardennes triple nicely for Liege this Sunday!

I’ll go with Van Vleuten and Niewiadoma to come home second and third.

Thanks as always for reading and as usual any feedback is greatly appreciated. Who do you think will win? Will Boels continue their Ardennes superiority, or will another rider knock them off top spot? Anyway,