mytwospokesworth in Tour Down Under, Uncategorized January 18, 2017 1,037 Words

That’s what I wrote in my Stage 2 preview and boy did Porte put in a massive attack! He rode everyone off his wheel and took a very impressive victory. That’s the GC over now for 1st place barring any accident or misfortune but the rest of the podium is still up for grabs on Willunga. 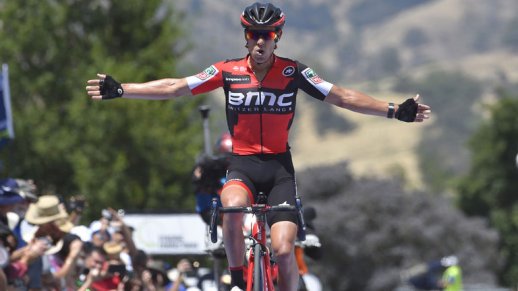 From a punting perspective we had no stage winner again, but the H2H double came in to cover the day. Hopefully that will be a recurring theme this year when more often than not my outside pick doesn’t win!

Anyway, moving on to Stage 3 and what the riders can expect to face.

A little bit lumpy but it’s no stage 2!

The tougher climbs come too early in the stage to be of any issue so it will be the circuit around Victor Harbor that decides the day. 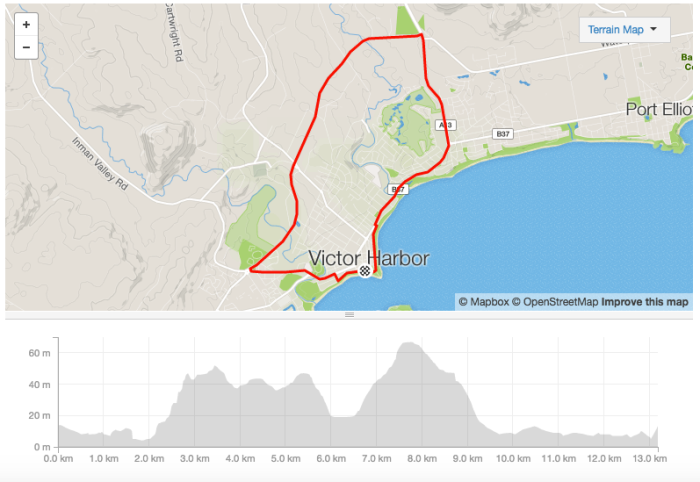 I did say in my GC preview when highlighting this stage that the first climb was 1.7km at 2.5%. However, that goes to the second peak, which flattens the gradient out a bit and it included some false flat. Using the profile above the main bulk of the climb is actually closer to 800m at 5.25%. This still shouldn’t be too bad for the pro sprinters but it depends on how the peloton attacks it.

Apologies for the slightly incorrect information beforehand but I didn’t have the time to make a profile of the circuit on its own until now. Anyway, something needs to be kept for these previews, right?! 😉

The run-in to the line itself is fairly technical.

A sharp right hander at 600m or so to go, followed by another 90-degree turn in quick succession. The riders then have to traverse a roundabout at 300m to go before a slight uphill kick in the final 100m* that averages 5%. They’ll be carrying a lot of speed into the kicker but it is something to think about and makes timing your effort even more important.

*At least that’s where I think the finish is as the organisers aren’t very helpful with their route descriptions. 500m after the last turn and “The Esplanade near Albert Place” has led me to deduce that the finish line is there. Channeling my inner Sherlock!

With a lot of today’s stage going along the coast there is always a chance that we could get some crosswinds. We may be left disappointed though as the wind doesn’t appear to be strong enough. However, according to the Australian Government’s Bureau of Meteorology there will be some moderate winds in and around the area.

There is also the possibility of rain late into the stage which would certainly spice things up! But as we know, meteorologists steal a living so I guess we’ll just have to wait and see closer to the time.

On paper this should really be a sprint, but with the big GC gaps created yesterday there is a chance that a break might be let go and if it does then it’s anybodies guess as to who wins! BMC have no sprinter so will just control the break and only chase hard if there is a threat to Porte’s lead.

Therefore it will be over to the sprinter teams to do most of the hard work and we will most likely see Orica and Bora (it is their namesake stage) share the duties with maybe one or two riders from Sky/Trek helping out.

I’m not going to bore you by going over the sprinters in-depth again so this will be a shorter summary!

I’m concerned with Ewan on this course as he’s not the best climber and does go awry in less than ideal conditions. The Bora pairing will be fired up for this due to the sponsor naming rights, but who sprints for them? I think Sagan will be given his chance this time. Van Poppel possesses a good uphill sprint and is a danger for the win, likewise is Bonifazio, although his lack of a lead-out will let him down. This finish reminds me of the stage Theuns won at the Baloise Belgium Tour last year. He’ll be up there again but I’m going to avoid him this stage. As for the rest, Planckaert may spring a surprise in a tougher sprint.

Some of the puncheurs might even fancy their chances but I think it will be too easy for them unless we get a very hard pace around the circuit. And of course there is always that slim possibility of a late attack sticking!

This should end up in some kind of sprint, 90% chance I reckon, with the other 10% being split between morning break and late attack succeeding.

A Bora rider will win the Bora named stage. Sagan takes his first victory in 2017.

He should be able to cope with the circuit and any prevailing weather conditions that we get. The only concern is if they choose Bennett over him, but they seem to have a good working relationship and I reckon the Irishman will let him go for it today! 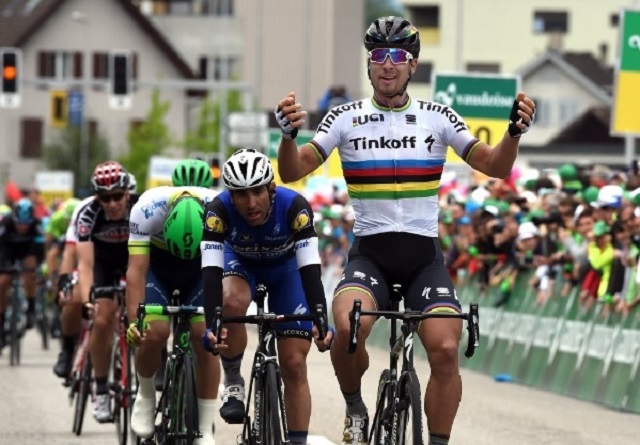 No real H2H that I like so far, but if I change my mind then I’ll add them/put them on my twitter!

As usual, thanks for reading! Hoping we get an exciting stage today as it will be the first one I get to watch properly. Any feedback etc is greatly appreciated. Anyway,

They were My Two Spokes Worth.