Last year saw an incredibly close race, with the top 4 riders separated by less than 10 seconds. It was New Zealand rider Linda Villumsen who came out on top edging Anna Van der Breggen to the title, with Lisa Brennauer rounding out the podium.

With Villumsen not here this year, there is a chance for someone else to step up and win the Rainbow Jersey. It won’t be an easy task for the riders though as they’ll have to contend with tough conditions. Let’s take a look at what’s in store for them.

The Elite women tackle the exact same course that we saw the U23 Men complete today. Almost two full laps of the Pearl circuit, totalling 28.9km. 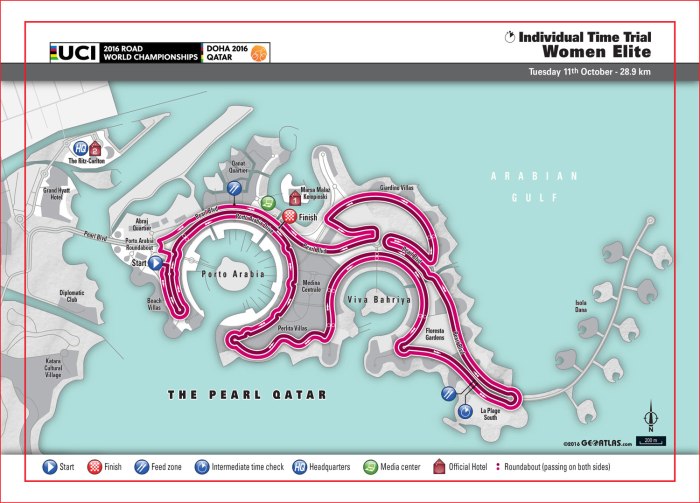 There a few tight roundabouts and corners, but most of the circuit is fast and sweeping with very little elevation gain. Being able to carry speed through the corners will help massively so good bike handling skills are essential, but also a bit of bravery to take more risks out on course will help to set a good time. That’s about it really, nothing much else to say!

However, the main challenge for the riders will be the conditions.

As we’ve witness in both the team time trial and the U23 TT today, the heat plays a huge part in the outcome of the race. Heat management and efficient use of energy are crucial in the 35 degree plus weather. The riders will be bitterly disappointed to see that they’re in for more of the same tomorrow, but what else can be expected when the World Champs are held in a desert!

With the temperature set to be even hotter than today there could be more riders struggling tomorrow. The late starters will benefit from a slight drop in temperature but the wind appears to pick up for them. The section of the course furthest from the start (most easterly) will be the area where those riders will face a stiff headwind. However, for the rest of the course it should even itself out and as we saw today, the wind direction and speed can change almost instantaneously.

The start order can be found here.

My unsuccessful pick for the Olympic TT, Ellen Van Dijk, starts as the bookies favourite and deservedly so. Aside from running off the road in Rio, where she would have finished on the podium otherwise, and third at the Chrono Champenois, Van Dijk has looked incredibly strong this year. This type of power course will suit here well but her sometimes lackadaisical bike handling could be of detriment. If she stays upright and is confident in the corners then she will be tough to beat. Not impossible, but tough! 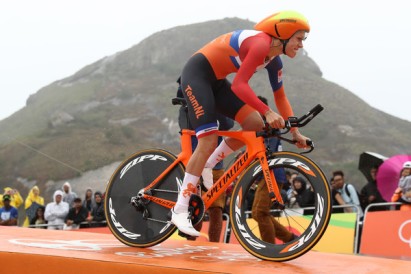 Her Dutch team-mate Anna Van der Breggen will be hoping to do just that. Arguably one of the riders of the season, the Olympic and European road race champion is a very solid TTer too, having made the podium at both those events in the individual discipline. She would probably want a hillier course to have a better chance but she can’t be ruled out because of her form. I just think there are riders more suited to this terrain than her.

One of those is Olympic silver medalist Olga Zabelinskaya. The 36-year old Russian is in the twilight of her career but has pulled off some remarkable rides this season and if she has continued that form then she is a real contender. She recently finished 2nd at the Chrono Champenois, beating Van Dijk.

The rider who beat them both that day? Katrin Garfoot. The Aussie champion has had one of her best seasons on the bike to date. She’s a solid climber but her area of expertise is time trialling. Finishing just off the podium at last year’s event, she’ll be here for revenge and looks in good form. Keep an eye out for her!

The third prong in the Dutch arsenal is Annemiek van Vlueten. After her horror crash at the Olympics she bounced back to win the Lotto Belgium Tour which was great to see! Another rider who can do a bit of everything the current Dutch TT champ will be aiming for nothing less than the top spot! She goes out the earliest of her team-mates so could benefit from the weaker wind or conversely suffer more in the heat.

As for the other riders?

I’m not confident of Lisa Brennauer‘s chances. Third last year, her time trialling has been a bit hit and miss so far this year and she’s yet to win an event. Managing to pick up numerous podiums, maybe I am being a bit on harsh on her, but the signs aren’t great. Nonetheless, Canyon performed better than expected in the TTT, so maybe she can turn it around too?

Amber Neben and Carmen Small could be in or around the top 5 for the USA as well.

There is one outsider I like the look of and that’s Ashleigh Moolman. The South African is in great form at the moment and will relish the tough conditions. She rode well for her team on Sunday which will have given her confidence for this event. Another rider who would probably prefer a hill or two, she certainly will give it her all!

Now for that time I cast the #HaugheyCurse upon some poor soul. There is a great chance we could see a Dutch 1-2-3, but it’s bad enough me ruining one riders chances, let alone a whole nation’s 😉

Van Dijk rightly is favourite, but I do really rate the chances of Katrin Garfoot for this course. Out of the top 5 favourites, she’s probably the rider who will benefit most from the flat course. Performing well in the Tour of Qatar earlier this year, she will be no stranger to the tough conditions and combining that with her good recent form, I think she’s on the cusp of a great victory!

Thanks for reading! Can you see past the Dutch trio and will the #HaugheyCurse finally be over? Who do you think will win? As usual, any feedback is greatly appreciated. I shall have the men’s TT preview out tomorrow evening. Anyway,

mytwospokesworth Final year student at the University of Stirling studying Marketing and Sports, with a passion for professional cycling.
Published October 10, 2016October 10, 2016