In a slight change from normal, I’ll be giving women’s cycling the attention it deserves by having a look at the 3rd edition of “La Course”.

It may not be the most prestigious race in women’s cycling, but due to it being coupled with live broadcasts of the men’s Tour, it’s very important for the growth and exposure of the sport.

The first two editions of the race saw fast and aggressive action from the riders with the peloton splitting up around the streets of Paris. In 2014, the imperious Marianne Vos took a sprint victory out of a reduced group of around 20 riders. Last year saw the weather cause havoc out on the course, with there being numerous crashes and pile-ups. Anna van der Breggen seized her opportunity and time trialed away from the bunch on the final lap, winning with enough time to sit up for a victory salute as a chasing “peloton” of 10 riders finished one second behind. 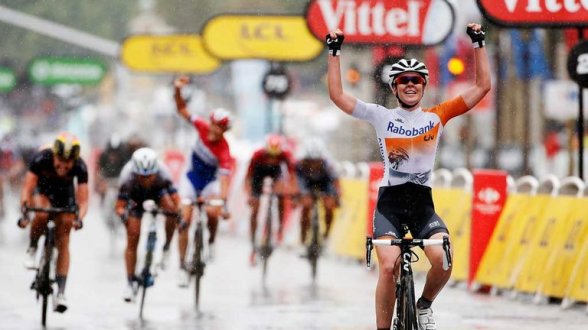 Could we be in for a similar situation this year? Let’s take a look at the route.

A simple circuit around the Champs-Élysées, using the same roads that have become iconic in the men’s race as a traditional end to the Tour.

The nature of the fast flowing circuit will ensure that the race will be covered at a remarkable pace, with it probably being completed in around 2 hours. 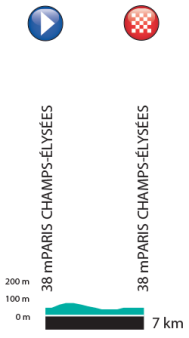 The circuit itself climbs a little bit here and there, but nothing too crazy, gaining around 50m in elevation. Completing it 12 times will drain some of the riders. Especially considering the aggressive racing that we so often see, and that I absolutely love, in women’s cycling.

One thing that the majority of the riders will be thankful for is that the weather forecast is much better this year. It looks set to be sunny all day, so they should have dry cobblestones and there hopefully should be fewer crashes.

The aggressive tactics really opens the race up. With the most likely outcome being some kind of sprint by the end of the race.

Smaller teams (6 riders max) means that the races are quite tough to control, so the majority of the teams adopt the old adage of “attack is the best form of defence”. Therefore, we’ll see teams with very strong sprinters such as Wiggle High5 possibly send riders up the road, Dani King for example, to cover moves from other teams.

These attacks can often stick, which opens up the possibility of a whole host of riders who can win the race.

2014 winner Marianne Vos has to come into this race as favourite. She’s had a great 2016 so far, after being out pretty much all of last year through injury. Winning 3 stages at the recent Thüringen Rundfahrt, she’s evidently in great form. Capable of winning a sprint from both small and large groups, she is a real danger!

The team with the best lead-out in the race has to be Canyon SRAM. As reigning World TTT champions, they are a massively powerful unit. They’ll have a choice of two sprinters; Barbara Guarischi or Lisa Brennauer. The former will be there if there is a large bunch sprint of around 50 riders, whereas I suspect Brennauer will be their card to play in a reduced bunch gallop.

Chloe Hosking or Amy Pieters will be Wiggle High5s sprinters of choice, with Hosking probably getting the number 1 card. She took a great win at the Giro Rosa earlier in the year, and will get the chance to lead the team after working for D’hoore last year. Pieters will be the option if the race gets wild, she did finish 3rd last year after all!

Team Liv Plantur will look towards their Canadian sprinter, come all-rounder, Leah Kirchmann. She’s had a great maiden season in Europe, after joining from Optum at the start of the year. Capable of mixing it in big bunch kicks, but also smaller sprints, she’ll be aiming for a podium. After all, she finished 3rd in the inaugural edition of La Course.

Boels Dolmans have several cards to play like always, they are incredibly strong! I’d fancy Chantal Blaak or Christine Majerus to be their team leaders.

There are a whole host of riders who will fancy their chances if the favourites play games with each other. I’m not going to go through them all but some names to listen out for during the stage are; Brand, Van Dijk, Cromwell, Cucinotta & Zabelinskaya.

The most likely outcome tomorrow is a sprint. In tradition of my previews, I’ll go for a bit of an outsider and say that the sprightly Aussie, Chloe Hosking, will take a memorable win! She’s done a lot of work for team-mates here in the past and will be duly rewarded tomorrow.

Hope you enjoyed this preview! I want to focus on women’s cycling whenever I can, and when the races are broadcast. I find the racing more exciting than the mens at times, it’s a lot less predictable. Would you like to see more previews? As usual, any feedback is great 🙂 Anyway,

mytwospokesworth Final year student at the University of Stirling studying Marketing and Sports, with a passion for professional cycling.
Published July 23, 2016July 23, 2016

One thought on “La Course Preview”