Hopefully Nieve was let off the leash, got into the break, and won the stage.

Again, I’m writing this preview in advance as I’m away from home all day today so it might be a bit shorter/less succinct. Apologies!

*Edit, looks like it was a GC day instead*

Another short and sharp test for the riders! With Paris metaphorically very much in sight, this will be the last chance for many to try to take a stage win.

After today’s gruelling start to the stage, the riders will be happy to see a bit of flat at the start of the map. However, this won’t make the racing any less frantic as a break tries to escape. It could even be after the sprint point that it manages to properly form! Before we get to the sprint point though, we have the Col des Aravis. A Cat-2 climb that drags on for 6.7km, averaging a 7% gradient. This won’t be fun for the guys at the bottom of the GC, after they suffered today.

The sprint point comes at the foot-slopes of the next categorised climb, the Col de la Colombière. This is a much longer climb than the previous one (11.7km), but it’s gradient is a lot less severe, averaging only 5.8%.

The second half of the stage is characterised by long valley roads, tough climbs and descents.

Next up is the penultimate climb of the day, the Col de la Ramaz. 13.9km at 7.1%, it will probably see the break split up here, maybe with 5 or so cresting the climb together. Behind, it shouldn’t really cause any GC difficulties unless of course someone is on a terrible day.

Once again, there is a long descent and a valley road before we reach the final climb of the day; the Col de Joux Plane. 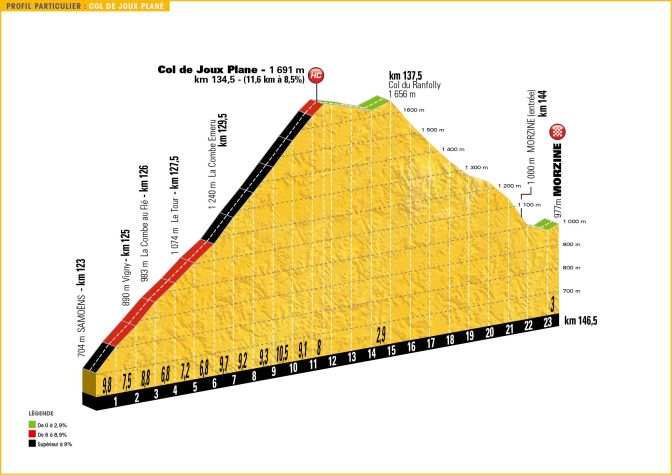 The toughest climb of the day has been saved for last, it barely goes under 7% for the whole climb, with several 9%+ sections. This in theory should blow the race to pieces, whether that’s in the break or in the GC group. Riders will give it their all on the last major climb of the Tour. Once over the summit they have to cut across the mountain, descending slightly, before climbing another 70m again, up to the peak of the Col du Ranfolly. From there it will be a steep and exciting descent all the way into the finishing town of Morzine.

The riders descend all the way into the final km. 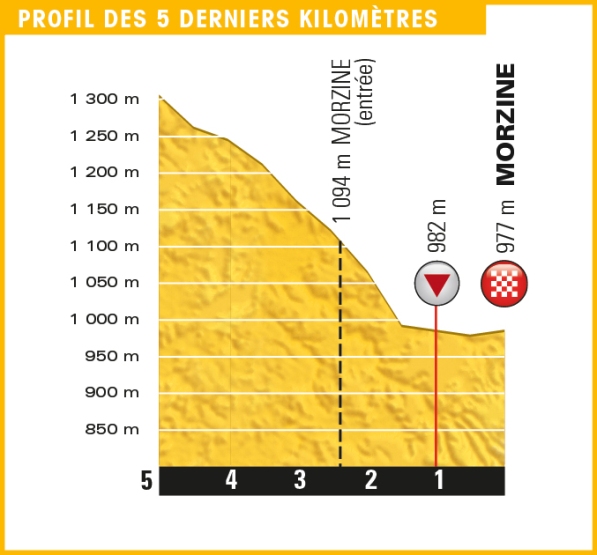 If there have been GC fireworks today and the fight for the podium is incredibly close then there is a chance this goes to the main contenders. However, none of the teams have looked strong enough to control a stage like this all day, apart from potentially Astana. Movistar and BMC have been relatively poor this Tour.

Look to all your regulars, such as Majka, Pantano, Zakarin etc.

Again though, I’m going to name three riders who I think can go well here.

The Shark had a sloppy start to the race, underperforming when in breakaways but seems to have turned a corner. He did a great deal of work, a truly monster turn for Aru on stage 17. This to me shows that his form is getting better. As I’m writing this one day early, I’m going to assume that today he’s worked for Aru and then rolled in to the finish, resting up his legs for tomorrow. He’s a favourite for the Olympic RR so will need a good test of his form, tomorrow looks exactly like that type of stage. If he makes the break, he wins. 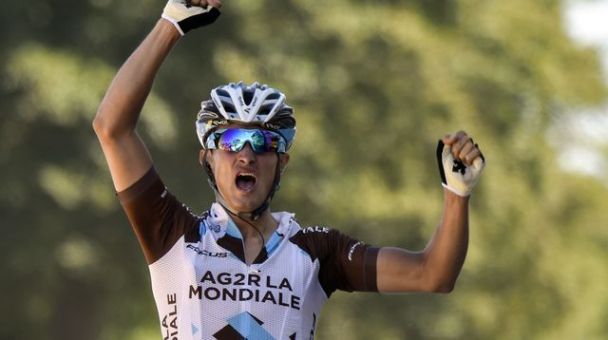 A more left-field pick, he’s had a very solid Tour so far, working well for Porte and TVG. So might be given his freedom by the team here to go and have some fun. Having hung on well to the GC favourites group on several occasions, he seems to be climbing well. Furthermore, he packs a good sprint on him so could beat quite a lot of riders if it comes down to a sprint in Morzine with a break companion.

If none of my picks from yesterday’s blog made it into today’s move, they could well give it a go tomorrow. In particular a certain Brit might be targeting this one.

If we get a break, Nibali wins.

If it’s GC guys, Aru descends like a mad man and steals victory.

I’ll be backing the 3 riders above, with Nibali receiving most of my money (unless of course he went in the break today), then Caruso. A similar staking structure to previous previews but maybe a bit more on Nibbles than normal. Obviously, I don’t know prices etc, so just have a hunt around yourself. This planning and writing ahead thing is tough!

Again, apologies for the slightly shorter preview. Hopefully we get an exciting end to the Tour’s time in the Alps! As usual, any feedback is great and thanks for reading! Anyway,