Firstly, we got the exciting end to stage 16 that I was hoping for. The fast run in, coupled with the cobbles and the two sharp hills resulted in only the strongest riders being left at the front. We saw a mix of GC guys, classics specialists and only the strongest of sprinters battle out for the win and it was Sagan who pipped Kristoff on the line, taking stage glory. A special mention must go to youngster Holst Enger who got up to take third, he has a real future ahead of him! 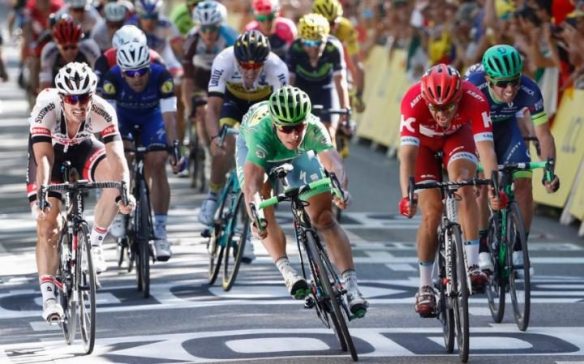 As for Albasini, he finished in a lowly, but nice and round, 100th place. In an interview that was broadcast during the race Matt White said that Albasini was suffering and not in good condition so would be supporting Matthews instead. A shame, especially not knowing that information pre-stage, but oh well!

GC wise, the second week has increased the gaps between the riders. Froome has looked unbeatable, he’s made some unbelievable seated attacks and looks to have the race won bar any misfortune. Sky themselves look incredibly strong and riders such as Valverde, Rolland and TVG say that’s almost impossible to attack them because of the pace that they’re setting. TVG was even dropped on stage 15 when the rest of the contenders came in together. Going into the final week the top 20 looks like this. 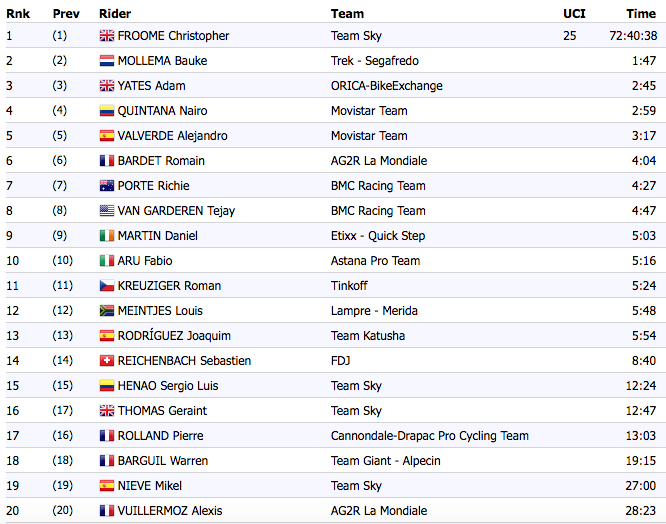 Flat, two little “bumps”, a descent into the valley followed by the main event: a Cat-1 climb and a HC climb back to back. Easy to very difficult! 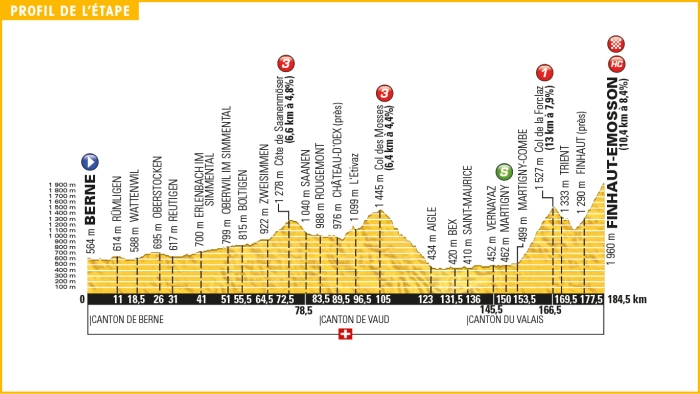 I’ll skim over the two Category-3 climbs. As you can see in the profile above, they aren’t anything too severe both averaging under 5%. The sprinters and those who are suffering from injuries/illness will hope to make it over them with the peloton. In fact, they’ll hope to make it to the Cat 1 climb; the Col de la Forclaz.

They’ll be quickly out the back here though. 13km at 7.9%, I think it’s a bit harsh to only have it as a Cat-1! The climb is relentless, with the gradient staying very consistent all the way up. Good for those riders who like to ride tempo! Here’s a link to the Strava segment of the climb. 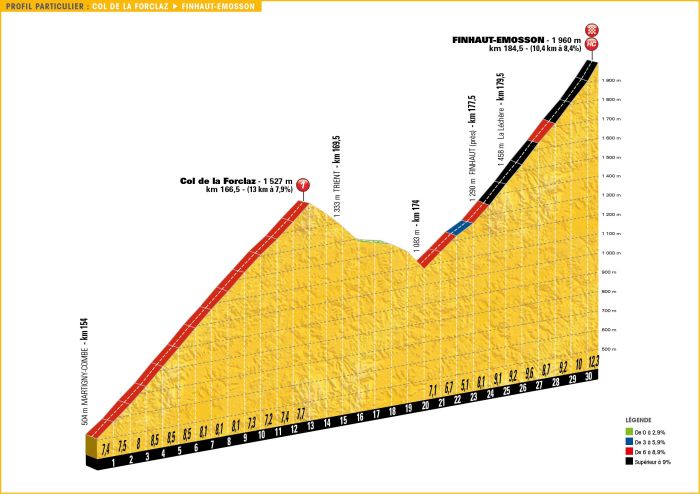 A short 7km descent follows for the riders to get some respite before they tackle the Finhaut-Emosson. The road actually climbs before they get to Finhaut itself and this is included in the stage profile categorisation above, meaning the ascent comes in at 10.4km at an 8.4% average. In comparison to the Strava segment that only starts from Finhaut. Either way, the climb is very difficult with the hardest and steepest section coming right at the end. Only the strongest riders on the day will win here, you have to be 100%, which sometimes isn’t the case after a rest day. Some of them might get a shock when they get here.

This succession of climbs was actually used at the end of Stage 7 at the 2014 Dauphiné, which saw a break claim the day, with Contador putting time into Froome behind.

How will this stage pan out then?

Much the same as the Dauphiné edition I reckon. A break day for sure.

We’ll see another massive fight to get into the move early on in the stage. It could be a case of another 30-man break. There’ll be a mix of rouleurs and climbers that make it into the move because of the terrain we start on. Some will have no hope at the finish though!

The reason I’m confident that it will be a break day is very much similar to the reasons I gave for stage 15, but are even added to further by the performance on that stage. Sky are incredibly strong and with there only being the two climbs of danger on the route, they don’t really need to chase. Why bother closing down a break? They already have a comfortable GC lead and a stage win. Plus, they’ve looked a little bit shaky with Henao getting dropped the other day. They won’t want to waste any excess energy. Marginal gains and all!

I doubt any of the other teams will commit to a chase, their resourses are already low in comparison to Sky and it’s too early for a Hail Mary team-attack and there aren’t enough mountains for that.

Once Sky get to the climbs they’ll work through their mountain lead-out, setting a relentless tempo that almost makes it pointless to attack. The other teams know this, referring back to what Valverde etc have said, so their best chance of stage glory is sending team-mates in the break. If it does all kick off behind then they have riders up the road who can work.

The break will probably need over 6’30-7 minutes going up the Forclaz because the final two climbs are very tough and the gap can be closed down pretty quickly. With the relatively flat opening 2/3rds of the profile and the likelihood of a large group, this is very much achievable.

As per usual, I’m going to name 3 potential breakaway candidates. 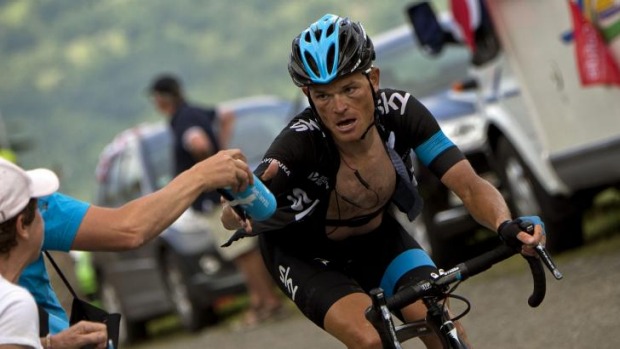 With Stannard and Rowe more than likely able to control and pace the peloton by themselves, Sky could send the Belarusian up the road to hunt the stage win. He’s been his usual workmanlike, unassuming self so far this Tour but has done a great job for the team. He could potentially be tired by now, but so will a lot of the peloton! A very strong guy on the flat, if he’s given the nod then he should be able to join the move. If he gets into it and with the way Sky are riding, he could be tough to beat. I also hope he gets some freedom after he was told to do a go-slow on the TT. Quite disrespectful to the World Champ in my opinion! 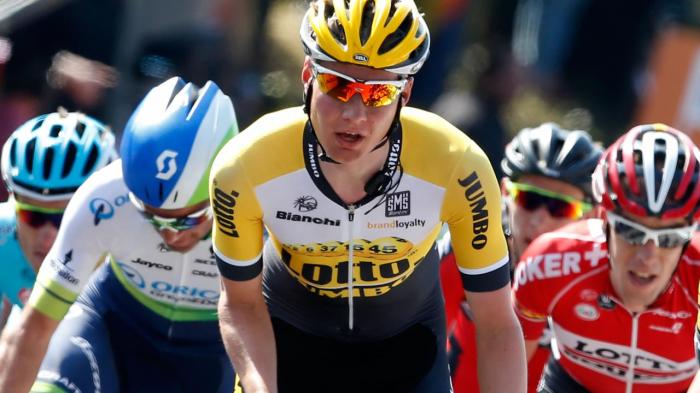 The Dutchman seemed to be riding well at the start of the Tour, maintaining a high position on GC until his crash on a descent during Stage 8. Since then he’s not done much and had been complaining of some injuries due to said crash. However, he seems to have found some kind of form again, coming home in the front group on Monday’s stage. He was one of the riders at the Dauphiné in 2014, managing to finish 12th on the day, losing 40 seconds to Froome. Pre-race he was supposedly given a Carte Blanche to hunt stages and due to unfortunate circumstances hasn’t been able to do that so far. I think this might change tomorrow! 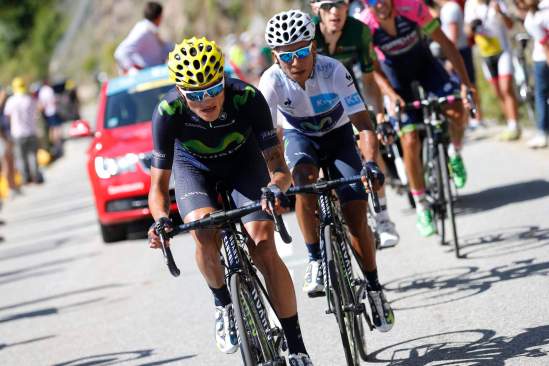 The leaders of the Team Classification will want riders up the road to help maintain, if not increase their lead in the competition. Anacona has shown in the past that he can go well in the final week. He is also a rider who has recon-ed these final climbs (as can be seen on the Strava link above) so will know the roads reasonably well. With Pantano going well, Anacona will want to regain the Colombian limelight.

There are other obvious names that can be thrown about such as Costa, Majka, Zakarin et al.

A break makes it all the way tomorrow (I’m 95% sure). The only way it doesn’t is if someone relatively close on GC makes the move. However, I don’t think any of the teams are risky/will want to burn all their chances when there are still a few stages to go. Especially considering the tough Mountain Time Trial the following day.

With this recent renaissance in Dutch cycling, I say Kelderman takes a famous and memorable victory!

Behind, we’ll once again see Sky set an incredible tempo, only this time Froome will attack and put the race well and truly to bed here. Unless of course Quintana has recovered and puts everyone to the sword. I think that’s just wishful thinking from me though!

Hope you liked my take on this stage, do you think the break can make it? If so, who wins? As usual we any feedback is great! Hope we’re in for a good stage. Anyway,