We got another race on two fronts, which seems to be the norm so far this Tour!

The break took an incredibly long time to form, it was only after around 60km that it got away. Unfortunately for our main pick of Kelderman, he made an earlier move that got reeled back but wasn’t in the crucial selection.

The break split up on the descent off the penultimate climb, with Pantano and Majka teaming up again. Once onto the final ascent, Zakarin jumped across to the duo and swiftly dropped them with Pantano only being able to hold on for a few hundred metres. That was how the top 3 finished on the day, with the Russian taking a great win.

Behind, Movistar and Astana attempted to weaken Sky but it was to no avail. Poels and Nieve managed to pull back attacks from Valverde and Martin. Froome then looked very comfortable responding to Porte’s dig, getting over to his wheel with relative ease. He now has an even greater lead over 2nd place Mollema. At least the race for the podium is getting closer! 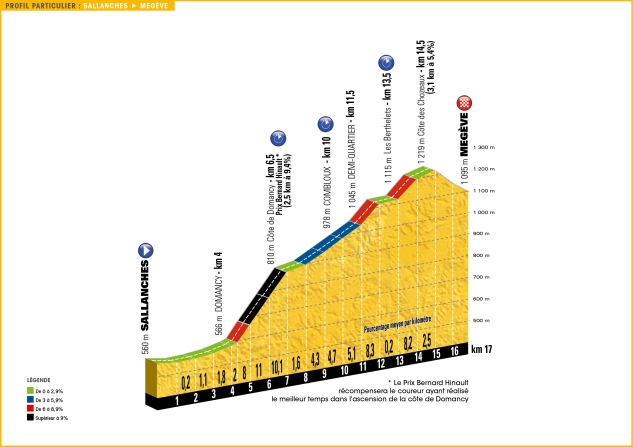 This is nowhere near as tough a test that we had at the Giro or Dauphiné earlier this year. Those stages were very much uphill all the way, and at tough gradients for the majority of the stage. At the Tour, the organisers have been kinder to the sprinters with not as sharp gradients (aside from the 2km over 10%), false flats for them to get some recovery and even a downhill run to the line! Although saying that, it is still going to be a tough day in the saddle for a few of them.

As usual for TTs, I’ve made a route on strava that you can view here. I always find it interesting comparing the official profile to that on strava. Sometimes the route profile accentuates features of the stage and vice versa.

This really is a mix bag of a mountain TT. Four km of flat to start off with allows the non-mountain goats to build up some kind of advantage here, before they enter the toughest part of the route: 2.5km at 9.4%. After that, the route gradually climbs all the way pretty much up to its highest point. Although there are some steeper gradients and false flats thrown in the mix! Once over the summit the riders descend all the way to the finish line.

I’m intrigued to see if we get any bike swaps after the first 4km of the stage.

With the riders having a glorious day out in the saddle today, they could be faced with worse conditions tomorrow, with the threat of thunderstorms and rain. This could have a potential impact on the later starters. Although, other sites suggest that the rain will come earlier. We’ve seen this before!

We probably won’t even get any rain after all of this.

The start times for the riders can be viewed here.

I was surprised to see that during the first TT the riders went out incredibly early and were split in 2 minute gaps. Normally they go out much later and only have the minute between them. The same thing is set to happen tomorrow, with the latter of the GC men having 3 minutes in-between their start times.

This means that weather, like the previous  TT, plays even more of an impact due to how spread out the riders will be. It is very unlikely that we’ll get similar conditions all day!

This really is only a two-horse race, Froome v Dumoulin.

Froome has looked impeccable all race, and never in danger. He always seems very much in control of what he’s doing and knows that he’s better than everyone if he just rides to his potential. I felt bad for Porte today as Froome just glided up to his wheel and sat on, he was just toying with him! This type of effort should suit Froome down to the ground. He was by far the closest of the GC guys to Dumoulin during the last TT and would fancy to gain time on him over the steeper uphill sections. He is a worthy favourite.

Dumoulin on the other hand has looked great when he needed to be, on his stage 9 success up the mountains in Andorra or his incredible TT on stage 13. However, he did look a bit shaky when in the break last Sunday. Some will suggest that the climbing is too much for him, but I’d kindly like to remind you of his incredible TT win in Aia at Pais Vasco last year. Those were some incredibly steep ramps, this 9% nonsense is a walk in the park compared to the 14% average of that wall! Dumoulin has also had the advantage of resting up today and not having to push it into the red, finishing over 22 minutes down on the GC group. Although it didn’t look like Froome went into the red either!

Aside from those two, Porte is probably the biggest challenger. He seems to be the only one who can remotely challenge Froome. However, as I stated above, Froome easily had him covered today so I can’t see that being any different tomorrow.

The other GC guys could go well, but for two outsiders look to Poels and Kelderman.

Poels arguably looks the strongest guy in the race at the moment. He truly is on incredible form right now and could steal the stage if he’s given the all clear to go full gas. I think he might actually be given freedom. The reason that I think this is that Sky are now only 2’20 behind Movistar on the team classification. We’ve already seen how competitive Sky are, going for KOMs etc., they’ll want to win this classification too. They’ll need 3 riders to go well and I would be shocked if Poels wasn’t one of them.

Kelderman fought to get into the break today but missed out. He’s a very good TTer and climber on his day. With nothing from this race so far, he might want to go out and impress. Conversely, he could as easily go on a club run and save himself for a later stage. 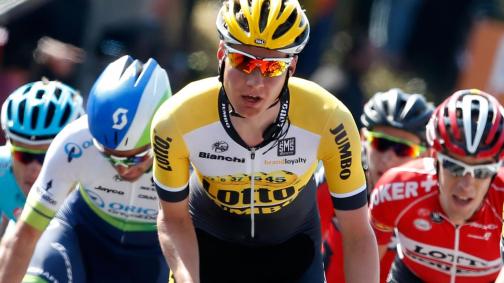 As much as I said this on Twitter earlier:

I can’t help but think that Dumoulin has just too much class in this discipline to lose. He’s shown on many occasions that he can climb very well and his measurement of effort is fantastic. With practically another rest day today, I think he just has enough in the tank to beat Froome. But don’t get me wrong, it will be very close! Unless of course Poels turns up and smokes them both 😉

An official no bet day for the blog. Although personally I’m backing Dumoulin and the two outsiders, but that’s because I’m a bit reckless.

I’m more looking forward to seeing the time gaps at the end of the day tomorrow in the GC battle than concerned with the stage win. I think Froome will have pulled out another chunk and will lead 2nd place by 3 minutes. Can you see Tom Dum beating Froome? As usual, any feedback is great! 🙂 Anyway,