The competition for the baby-faced riders of the Tour de France, the White Jersey adopts the same approach as the Yellow Jersey but with the only condition being that the riders have to be 25 or under at the start of the calendar year.

Who qualifies this year?

National and bookies favourite, Warren Barguil comes into this race after a stellar performance at the Tour de Suisse where he finished 3rd on GC. However, I fear going that deep and performing that well at that race will have a negative effect on his aspirations here. The TDS was a lot more gruelling than the other preparation race (the Dauphiné) which is where all of the main stars went.

I’m not sure he’ll have enough left over in the final week.

Second favourite for the Jersey, Yates has performed well over week-long stage races recently, finishing 7th at the Dauphiné. However, his forte seems to be the lumpy one day classics. As I said in my KOM preview, Orica come to this race without GC ambitions and will be on the hunt for stages. This will be the same for Yates, therefore, I can’t see him winning this jersey.

A Carlton Kirby favourite, the South African has had a pretty poor season so far. However, things seem to be on the upward trajectory after finishing 9th on GC at the Dauphiné. A great climber on his day he finished 10th on GC at the Vuelta last year after having to withdraw from the Tour. He’ll have learnt a lot from those races, both physically and mentally and will benefit from it this year. With normal GC rider Rui Costa going for stage wins, I think Meintjes will be given the all clear to go for the classification. He has a very good chance in my opinion.

Kelderman has for a while been touted as the next big thing in Dutch cycling, being a potential challenger for the Tour in the future. He’ll like the amount of TT-ing in this race and that puts him at a big advantage over his competitors. However, after looking strong at the opening of the TdS he faded quite badly towards the end of the race. Maybe saving something for here? With Gesink out of the squad he should be their main GC hope, but Lotto insist that he will have a Carte Blanche. Too many times in the past I’ve been let down/disappointed by his performance. I can’t see that changing here. 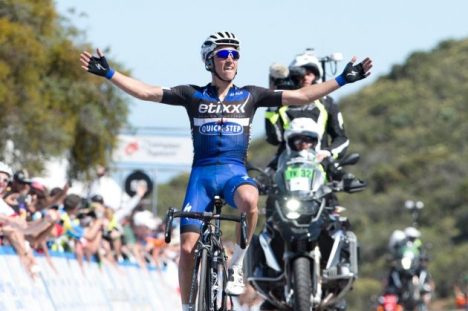 If Meintjes was a favourite of Kirby’s, I can’t put into words how much he loves Alaphilippe! I might set up a ticker each stage to see how many times he’s mentioned. Anyway, the Frenchman has had a very good middle part of the season after an illness/injury plagued first part. He won the Tour of California convincingly and managed 6th on GC at the Dauphiné. Winning the White Jersey along the way. Like others on the list though. I think he’ll be given more of a free role in the team, hunting stages. I’m not sure if he’ll stay in contention for the White Jersey here.

Best of the Rest

Argentinian Eduardo Sepulveda could give the jersey a tilt, but I don’t think he has enough quality over the three weeks. Lawson Craddock has had a very consistent season so far and could definitely step up here. However, I think he’ll have to do some team-work for Pierre Rolland and will lose time that way. Patrick Konrad, Jan Polanc and Natnael Berhane all qualify and have an outside chance but I can’t see it personally.

One outsider who I would like to highlight is former German champion, Emanuel Buchmann.

The Bora rider has had an underwhelming season so far, plodding along, picking up top 10s and 20s here and there. However, for some strange reason I think he’ll go well here. Like others I’ve mentioned, doing the Tour last year will have taught him a few things. He actually managed to finish third on one of the mountain stages, behind Majka and Dan Martin. He is definitely talented!

I don’t think the two main favourites will live up to the expectations and little Louis will win! He might even manage a top 10 on GC along the way.

Hope you enjoyed my thoughts on the white jersey. Apologies if this is shorter than normal! Mainly because there isn’t much to say and I’m away at my graduation so I’m short of time. Anyway,

mytwospokesworth Final year student at the University of Stirling studying Marketing and Sports, with a passion for professional cycling.
Published June 30, 2016