This week seems to have dragged on for a while, but the first stage of the Tour is finally upon us! The Yellow Jersey appears to be destined for the shoulders of one of the many sprinters that are here at this race come tomorrow afternoon. But first, let’s take a look at the route the riders will have to traverse.

Not a challenging parcours in terms of climbing, the opening stage is a fairly flat affair. There are some bumps along the way but nothing overly worrying for the fast men. 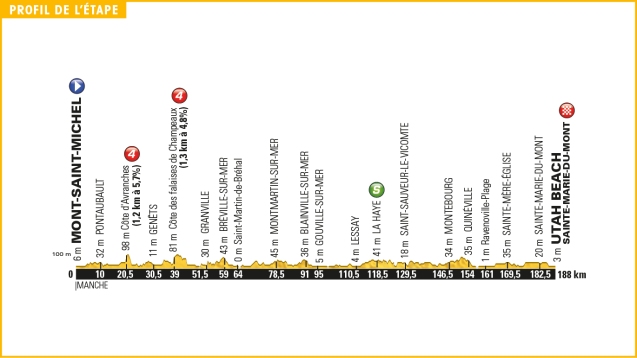 We’ll probably see a slightly tougher than normal fight to get into the morning breakaway with the two categorised climbs coming within the first 40km. The winner of these two climbs will get to pull on the Polka Dot jersey at the end of the day. Expect the usual suspects and teams to go after it.

The main obstacle that the riders will have to face on this stage is the threat of crosswinds.

With the race never straying far from the coast-line, the action could start soon after the final KOM climb.

The above screenshot is taken from windfinder.com and focusses on the town of Granville which is situated roughly 51km into the stage. The wind direction and speed definitely looks strong enough to create some echelons! The same can be said later on in the stage too, with the following screenshot taken of the town of Lessay, which is 110km into the race.

If some of the teams decide to put the hammer down then we could see some splits and time-gaps. Although there is a long way to go after this point (just over 75km), the race comes slightly more in land and should benefit from a cross-tailwind, cross-headwind and finally a tailwind coming into the finish at Utah Beach. Any reasonable-sized gaps made earlier in the stage will be very hard to bring back!

If it comes down to a fair sprint then there really are only two contenders; Marcel Kittel and Andre Greipel. They are quite evenly matched in this type of finish but I’d have to give Kittel the edge, and he is rightly the favourite for the stage. If Greipel wants to beat his countryman then he’ll have to start his sprint ahead of him. This is certainly possible as Greipel has the best lead out train in the race in my opinion!

Who will try to split the race?

Some of the GC teams (Sky, Tinkoff etc) will give it a shot, but annoyingly for some of the other sprinters Etixx and Lotto Soudal are capable of doing some damage as well. So there is a very good chance that they’ll be around at the end no matter what. More than likely, the rest of the sprinters will probably be fighting for third place.

However, with this being the first stage the usual peloton nervousness will be exacerbated by the potential tricky conditions and I think we’ll see some unfortunate crashes and possibly some GC/sprint casualties. Therefore, I don’t think we’ll get a full sprint at the end of the stage. It could very much be like stage 2 from last years Tour, where only 24 riders finished within 15 seconds of the winner on that day, Andre Greipel.

The numbers and composition of that group, who knows?!

There are two riders who if the race gets tough that I’d like to highlight. First up is Fabian Cancellara.

The Swiss rider is about to start his final ever Tour de France and after missing out on wearing the Maglia Rosa at the Giro, he’ll be incredibly fired up here to make amends. He managed to sprint for third on last years wind-affected stage, pipping Mark Cavendish on the line. If the group gets whittled down to round 15 riders, he is a definite danger man.

The other rider is his team-mate and Tour debutant, Edward Theuns.

Making the step up to World Tour level this year, the Belgian has delivered some good results this year, finally getting his first win for Trek at the Baloise Belgium Tour. A rider not afraid of wind (and rain), he’ll definitely be one of the fastest riders left in a reduced group. After all, he came 4th at Scheldeprijs (A.K.A The Sprinters World Championships) so is no slouch.

It’s the boring and simple pick, but I can’t really see past a Marcel Kittel win here. He’s the fastest man in the world, and now riding for Etixx (arguably the best echelon creating team) they’ll be able to safeguard him in the bad conditions.

However, there is a slight chance that there is absolute carnage out on the road tomorrow and if that’s the case then look to Cancellara or Theuns to possibly sneak on the podium or even better.

This really should be a no bet stage. I personally have money on Kittel at 9/4 from pre-Giro, however those odds are long gone and I can’t recommend him at the price he is just now (around evens) in a race that could be wild.

Just because I’ve mentioned them as possibilities if things do get crazy, I’m going to put a little fun stake (0.1pt EW) on Cancellara and Theuns.

Hopefully we do get some crosswind action to make the stage more exciting, otherwise it will be a dull and long day until the final 20km. Enjoy the race wherever you’re watching it from! Anyway,