Much like the sprinters and their Green jersey competition, the King of the Mountains classifications offers the climbers who aren’t going for GC a chance to win a jersey.*

*Although, Chris Froome did win it last year.

How does it work?

Like the stages being classified going on the difficulty of them, climbs are categorised in a similar fashion.

The harder the climb, the more points available. Simple!

It’s also important to note that points on a summit finished are doubled. For example, the winner of stage 12 up Mont Ventoux will score 50 points.

What type of rider will win it?

Like I said above, it is traditionally a climber a who goes in breakaways and is no real threat on GC that wins the jersey. For example, Mikel Nieve started to mount a serious charge for the KOM jersey at the Giro after being in the break of the day on stage 13. This kind of highlights the weird nature of the KOM jersey as any real tilt at the title isn’t made until the second half of the race.

In the table below I’ve highlighted the maximum amount of points available out on the road. 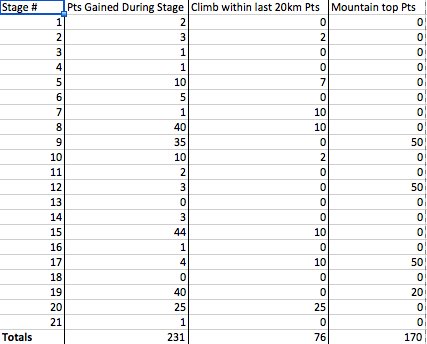 After Froome winning last year, the organisers seem to have reduced the number of summit finishes. Hoping to favour the non-GC guys.

Stages 8 and 9 offer a lot of points out on the road, but for any half-decent climber to make the break on these stages they’ll have had to lose time in the previous days. How will that happen? Well, there might be splits due to echelons in the first few stages, an unfortunate crash, or they might just lose time deliberately to hunt for stages/the KOM later in the race.

Similarly, some of the stages in the final week offer a lot of points out on the road. These will be crucial in shaping the KOM jersey. You probably need to make the break on stage 15 and 19 to be in with a chance.

One of the major deciding factors for where the jersey will end up are those 76 points that can be won in the final 20km of stages. It really depends on how the GC guys ride these stages. For example, stages 7, 8 and 15 all have a Cat-1 climb before a descent to the finish. Will the GC guys try to put their rivals in trouble here, or be happy to let the break go. The honest answer is I don’t know. It’s too far ahead to predict how the race will be poised at that stage. I would think at least two of those stages will go to the break, the same can be said for stage 20. Therefore, I do think this years KOM jersey will be won by a non-GC rider.

But who you say?

Let me just have a look… 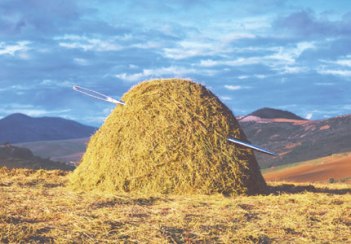 Firstly, I think we can discount any Team Sky rider. They’ll be all in for Froome.

Secondly, you have to be a good climber to win the jersey, but also be relatively attacking and opportunistic. This gets rid of a large chunk of the peloton.

However, from the outset we’re probably left with around 40 riders who could feasibly win the jersey if circumstances went their way. So like stage picks for breakaway days. I’ll narrow it down to three riders (of varying odds) who could give it a crack. 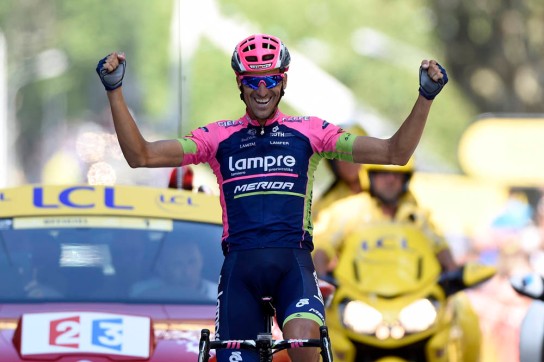 The veteran Spaniard (who now rides for Orica) has become a bit famous for his long-range solo attacks on mountain stages. He won a stage at both the Tour (picture above) and the Vuelta last year. Supporting Chaves at the Giro in May, he rode very strongly when called upon and impressed me. Here at the Tour, Orica don’t really come with any GC aspirations so their climbers will be given free roles. I would not be surprised to see Plaza lose time during the first week to be given freedom later in the race. I’m sure we’ll see him in a few breakaways! If he gets near the lead of the jersey then he’s the type of rider to keep fighting for it. 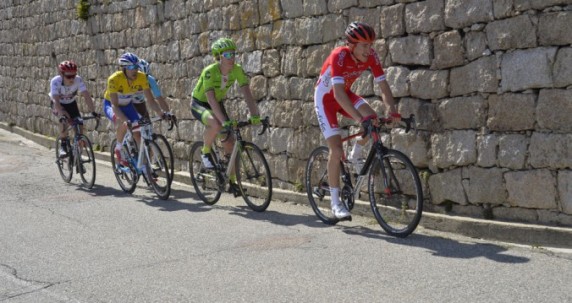 He had a very good start to the year with 11th on GC at Paris Nice and 4th on GC at Critérium International, highlighting that he can climb with the best. Since then, he’s been a bit off the boil. Cofidis’ main GC rider will be Navarro so I expect Jeannesson to be given free rein in the mountains to hunt stages or the KOM jersey. It would be great for the Pro Conti team to end up with a jersey at the end of the Tour. 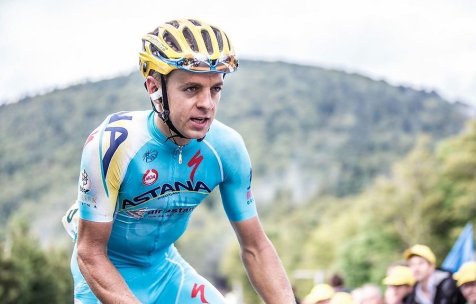 A very solid and reliable rider, Kangert seems to have re-found his form this year, finishing 2nd at the Giro del Trentino. He put in a solid bit of team-work for Nibali at the Giro but hasn’t raced since. He’s one of those riders at Astana who could be given a bit of a Carte Blanche in this race. He’ll be tough to beat if he makes the right break.

As I’ve said earlier in this preview, this jersey is incredibly tough to make a pre-race prediction for. However, it would be dull if I didn’t stick my neck on the line and make a prediction.

I do lean towards it being a non-GC rider and I’ll go with someone who I guarantee will make the beak on a few occasions this Tour. Ruben Plaza will be the King of the Mountains. 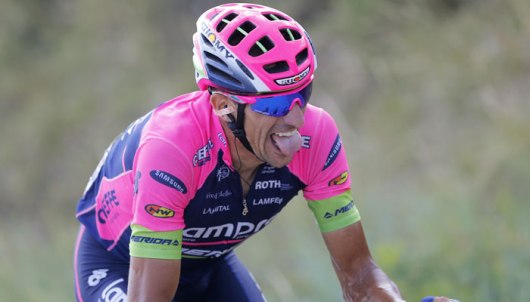 One of the more fun markets to have a bet on. I’m going to back the three of my selections here to keep me interested over the three weeks.

Hope you enjoyed my interpretation of how the KOM jersey will pan out this year. What are your thoughts? I should have a Young Rider (and other) preview out tomorrow. Anyway,

mytwospokesworth Final year student at the University of Stirling studying Marketing and Sports, with a passion for professional cycling.
Published June 29, 2016June 29, 2016