Three from three for Lotto and a second stage win for the Gorilla, who produced another great power sprint.

I thought our pick of Modolo had it as he peeled off the front around the final corner. However, he had went too early and Greipel moved past him with relative ease. It was a shame that the forecast was off and there was no rain, I really think Modolo would have won in those conditions. But with the likelihood of crashes, for the riders safety, it was probably the best thing!

The break was never really given a chance but I managed to get Koshovoy in it. Good signs for the coming weeks with the lottery picks.

Tomorrow’s stage is one that fans have been looking forward to since the route was announced as we cover the famous Strade Bianchi (White Roads) of Tuscany.

The stage isn’t as tough in terms of the amount of climbing metres than the past few days, with large segments of flat.

“The stage course rolls along wavy roads, with a few narrower sectors while crossing urban areas, all the way up to Indicatore (intermediate sprint) and Arezzo. Next on the route, after a first pass over the finish line, is the Alpe di Poti climb, featuring 6.4 km on dirt roads, and doubledigit gradients. After clearing the KOM summit, the road drops quickly into Foce dello Scopetone and straight into the finish.” (Road book extract)

The first categorised climb comes after 115km, with the ascent up the Passo di Scheggia. There is no official profile (again) in the RoadBook, but it doesn’t look to be that difficult a climb. I’ve managed to find a profile here.

As you can see, it’s a fairly easy climb for the big GC guys and the majority of the bunch will be able to make it over together. Once over Scheggia there is a quick descent and a long flat section, crossing the finish line in Arezzo, leaving the town to head for the Alpe di Poti.

As you can see, the most gruelling part of the climb in terms of gradient comes right at the start, with a 3km section averaging 9.1%. The whole climb itself is 8.6km in length averaging 6.6% with a section of 14.4%. If you want a more interactive profile, then click here for a Strava link.

The most exciting part for us the viewers however, is the white roads that feature for the majority of the climb. We normally only get to see these roads once a year at the rather simply named, Strade Bianchi race. The last time the Giro used similar roads was back in 2010 when Cadel Evans put his mountain bike background to good use, winning stage 6. However, it must be noted that more of the Strade were used that year than this edition’s stage sets to use.

Once over the top the riders face a fast descent but on wide roads, so it doesn’t appear to be too technical.

“After the flamme rouge, the route takes two right-hand bends on wide roundabouts, and passes under a mediaeval gateway. A short and steep climb (first on asphalt road, and then on stone-slab paving) leads to the home straight (200 m), still slightly uphill (approx. 5%), on 6-m wide stone-slab paving” (RB Extract)

Most cycling fans will have been praying for rain for this stage, whereas the majority of the riders will have been hoping for sunny-skies. It looks like the cycling gods have sided with the Tifosi for tomorrow!

Not much rain forecast, but it should at least make the white gravel roads turn into a white mud!

Some of the riders will absolutely love the look of this, others will be less enthusiastic, to say the least.

According to worldweatheronline it looks set to be raining even heavier in Arezzo. With the finish line not being so far away from the climb, I’d say average out the two weather forecasts. Either way, it looks like we’re going to get some rainfall and damp roads.

This will make the climb up the white roads even more difficult. It will be a case of most riders having to sit in the saddle so as to maintain traction. Although if it gets really muddy then putting too much weight over the back could result in them spinning their tyres and wasting energy.

All is set for an exciting stage!

This is a really tough stage to call.

With the lack of a KOM point early on in the stage, we should actually see a break get away nice and early tomorrow. As long as Nippo Vini Fantini get someone in it, surely they can’t mess up again?!

However, as a lot of teams will think the break will contest the stage win, it could be some time until it goes clear.

The composition of the breakaway again will be key for its success. It will need a mixture of strong rouleurs and good climbers to build up an advantage. Again, look to those far down on GC for potential candidates.

I think the break has a very good chance of making it tomorrow. With the type of finale that we have, the only way that it won’t stay away to the finish is if a GC team really fancies their rider’s chances.

The problem is, I think quite a few of the riders might. The final kick up into Arezzo suits someone like Valverde down to the ground. Therefore, Moivstar might chase. The same can be said for Ulissi. The difficulty for Ulissi will be getting over the climb. He has gone well at SB before, finishing 7th this year, so he knows the white roads well.

Nibali felt a bit mugged the other day and there’s a good chance that Astana could chase the break.

The one saving grace for the break is that I don’t think we’ll see Giant doing any proper work. Dumoulin was complaining earlier about the fast pace Nippo set at the start of the day and it sounds like his team is tired. Therefore, on balance I favour the break to make it all the way tomorrow!

Who are the Breakaway candidates?

Who’s been eating all of their KitKats then?!

As mentioned above, look to those far enough down on GC not to worry any of the overall contenders. Anyone who’s over 10 minutes down should be fine. That just leaves the 146 riders to pick from then… XD

They have to climb well so that at least removes a few. Although the issue is then getting in the break, because it will no doubt be a frenetic start to the day again.

My breakaway lottery picks of choice are going to be Zoidl, Serry and Mohoric. I have no real reasoning apart from that they’re solid climbers and good on the flat.

I say a breakaway makes it.

Then it’s just a case of being lucky with who makes it.

Zoidl was climbing very well in the Tour of Croatia, winning the Queen stage. He hasn’t been great so far at the Giro, but I’m going to presume (and hope) that he has been saving his legs for stage hunting. 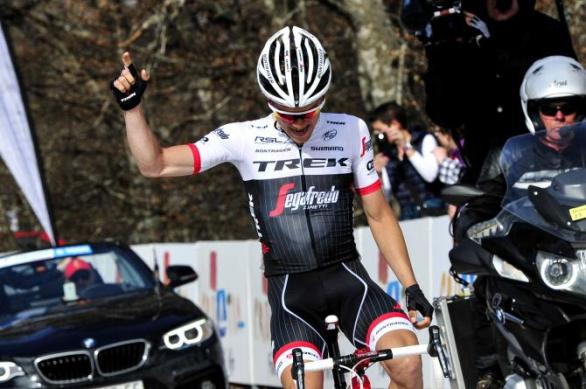 Again, keep an eye out for other bookies, you might get a better price.

Small stakes only tomorrow and I’ll maybe go in-play depending how the stage is going.

I’ll more than likely tweet out another couple of breakaway picks later, so keep an eye out for that!

Hopefully the stage lives up to the high expectations and is remembered as a classic. I won’t be watching unfortunately so I’ll tune in later on and watch a re-run, I might tweet out something in-play if it looks like it’s going to be a GC battle. Nonetheless, enjoy it wherever you’re watching it from! Anyway,