Two in two for Lotto Soudal, with one of Tim Wellens’ long-range attacks finally paying off! Nice to see, he deserves it for his attacking intent. He’s certainly a fan-favourite.

As for the GC riders, a danger-man I highlighted yesterday, Fuglsang, attacked and was quickly caught by our 300/1 man Siutsou. They rode away from the peloton but were slowly brought back by the work of Movistar who realised that Valverde might have a chance to sprint for bonus seconds. However, Nibali launched a big attack but that was covered by Roche. Just as the peloton bridged back to Nibali; Dumoulin, Zakarin and Pozzovivo attacked. Nobody followed. They caught up with Fuglsang and Siutsou just under the Flamme Rouge, with a strong Fuglsang out-sprinting Zakarin for second place. Siutsou came home in a good, but annoying 5th place. Not good enough for any payout! Brambilla ended up doing a lot of work on the front of the peloton to help Jungels, and Firsanov finished in an OK 12th. Anyway, onto tomorrow’s stage.

Another long day with 211km being covered in total. It’s also another tough rolling start to the day, with an early Cat 2 climb to wake the riders up. Rather them than me! 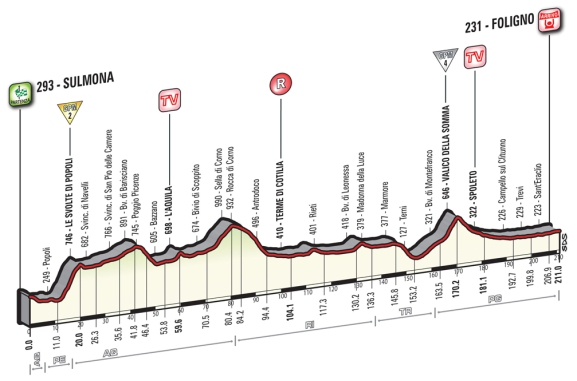 After the summit it’s a mixture of climbing and descending for the next 130km or so, until we get to the bottom of the valley before the Cat 4 climb of Valico della Somma.

There’s no official profile of the climb, but going off of the Strava segment above, and using this handy calculator, I make it out to be 14.5km long with an average gradient of 3.5%. Some of the sprinters will not appreciate that! However, it really kicks up in the final 4kms, where it averages 6.9%. If the sprinters didn’t like the start of the climb, then they’re going to despise that section.

The saving grace for the sprinters, is the 40km of descending and flat to the finish line after the summit. If they get distanced a little bit, with the support of some team-mates they should manage to get back to the front of the race. Nonetheless, if the pace is pushed on by those sprinters who can climb then I don’t think we’ll see the proper big guys until the end.

The finale itself is a very tricky one, with a few sharp turns in the last 2km. Things could and most likely will get dicey if we get a sprint.

Looks like it’s set to be a pretty miserable day in the peloton, with it set to be raining in Foligno for the arrival of the riders. 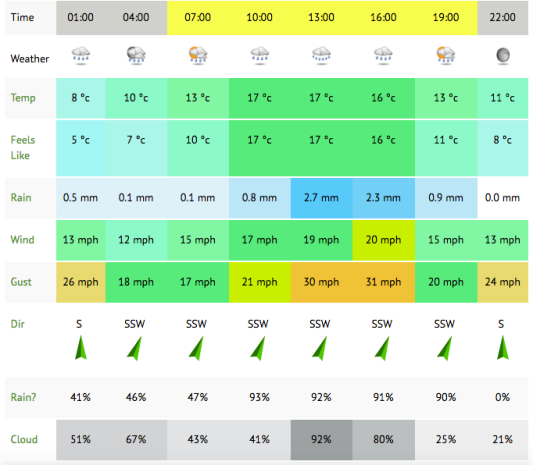 It looks colder than the past few days, but it’s nothing too severe. One thing that could cause an interest in the peloton throughout the stage is the direction of the wind. It looks to mostly be coming from the South or South-SouthWest. This creates the possibility for some crosswind action.

As you can see on the route-map above, there is a chance for crosswinds early in the stage if a few teams want to take it up. Whereas, in the final 55km it looks set to be predominantly a tailwind, although slightly cross-tailwind. This will help to keep the pace high. It could increase the chances of a break staying away, but it will also make it harder for anyone dropped from the peloton to catch up, as the bunch will more likely be going at a faster pace.

Who are the stage favourites?

The most likely outcome of Stage 7 is that it will end up in a sprint of some sort, possibly the whole bunch, but I think we’ll see a few riders dropped before the finale.

I don’t think we’ll see either of the two sprint stage winners take part in this one. Kittel seems to have been suffering a bit recently and I’m not sure he’ll make it over that final climb. Or if he does make it over, I think it will have taken a lot out of him. Whereas, I’m sure Greipel will make the finale, but he goes missing when the sprints get messy/very technical and I’ll think he’ll do the same tomorrow. It isn’t worth the risk of injury for him, he already has his stage win.

Therefore, I think we’ll see a battle between Modolo, Demare and Nizzolo, with Hofland not too far behind. I would normally include Viviani in that group, but he’s been indifferent so far this Giro and I’m not sure he’ll be on his best form tomorrow.

Of those teams, it seems that Demare has the longest and best lead-out and he’s the most consistent performer so far, leading the Maglia Rossa competition if we discount Kittel.

Nizzolo has dissapointed so far, he hasn’t really gotten involved at all and his sprint train has been pretty poor. In contrast, I have been impressed by Hofland who seems to have gotten his speed back and has produced good results even though he doesn’t have a proper train. This will most likely be his downfall in this stage.

For this stage though, I really like the look of Modolo.

As alluded to above, he has all the credentials to go well here. He’s an excellent bike handler and that dodgy looking final kilometre looks like it suits him down to the ground. In Ferrari he has an exceptional lead-out man. Ferrari is capable of bringing Modolo up to the front at just the right time, either doing a pull himself, or dropping him on second wheel. In tomorrow’s sprint I think we’ll see the former, with Ferrari leading Modolo out in the closing few hundred metres. I think he’ll bring him up just before that final turn. We saw something very similar at the Tour of Turkey a few weeks ago (watch the video here) and I expect much of the same on this stage.

So it’s a nailed-on sprint then?

Not entirely in my opinion. A sprint is the most likely outcome, but after a tough stage today and the rolling terrain tomorrow. I would not be overly surprised if we see the break of the day go on and make it. For this to happen a couple of things need to fall into place. Firstly, there has to be several Italians in it, and secondly there has to be representation from the majority of the big sprint teams.

We could possibly see the biggest break of the Giro so far tomorrow, with maybe 8 riders or so (maybe more?!) going up the road.

Candidates for the break have to be far down on GC, but be able to climb reasonably well to cope with the bumpy terrain. Look to those who rolled in far down on the stage today, riders like; De Marchi, Kuznetsov, Tjallingi, Bettiol etc.

I mentioned my picks for the breakaway lottery on Twitter earlier…

It will be interesting to see when the break forms and how strong it is. We’ll be able to tell from an early stage if it has a good chance of surviving or not!

I’m going to have to take two predictions again, if we get a sprint (I’m 65% sure we do) then I can’t really look past Modolo for this. I always like to back him on this type of finish and he usually doesn’t disappoint! 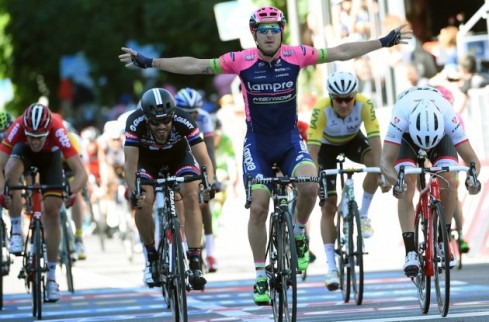 However, if we do get a break make it to the finish line then I think someone like Simon Clarke has the credentials to go on and win. He was going well at the start of the season but is here to work for Uran mainly, but could get a bit of freedom tomorrow. He packs a good sprint from a very small bunch as well.

I know most of the prices on the breakaway riders are gone, but seeing as I tweeted them out earlier, I’m still including them in the blog!

Modolo is definitely still value at the 12/1 you can get him at. I’m going to invest some more (that won’t be included in the blog).

Apologies for this being out a lot later than normal. I’m back home visiting from Uni so I spent some time with the family this evening and only started writing this at around 11pm.

Everything should be back to normal tomorrow! Once again, hope you enjoyed this preview. I’m grateful for any feedback, both positive or negative and any shares on social media would be fantastic. Enjoy the race wherever you’re watching it! Anyway,