Another sprint, another German win but not from the rider that you’d expect!

Andre Greipel powered up the hill to the finish line, putting a gap over his sprint rivals that was reminiscent of Kittel’s stage wins back in the Netherlands. Demare got up for second, with Colbrelli snatching third ahead of a fading (but very impressive) Bob Jungels. 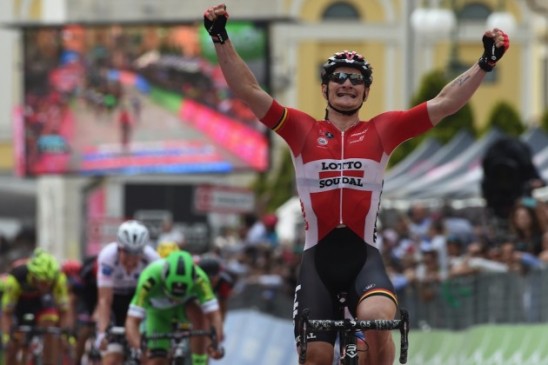 As for the blog picks of Rojas and Hansen. Not great. Again. I don’t want this to become a recurring habit!

Whereas, Hansen was roped into doing some work for the eventual winner and came home around 2 minutes down. I’m sure he’ll give it a go later on in the race!

Anyway, onto tomorrow’s stage and our first mountain-top finish of the race. A short stage at only 157km the main focus being the two category-two climbs that the race will cover.

The first being the ascent up the Bocca Della Selva which comes fairly early on in the stage. This climb is the tougher of the two and some of the riders will be happy about its placement early on in the day. The reason I say this is that it will most likely not be rode up at any severe speed, we might even see some of the sprinters hold on over the top of it. This will all be dependant on when the break goes up the road though. If it goes from the gun then it will be an easy ascent, if not then we might see some riders really struggle here as the pace will be very high. I think we’ll get a nice early breakaway.

After this climb, there is a long descent and bit of flat before we reach three uncategorised bumps. As we’ve seen in previous days, these un-categorised bumps are more often than not very tough and we’ll see a reduction of the peloton here. Particularly over the last of the three and the penultimate climb of the day. This will mean that the peloton will be fairly small, around 60-80 riders at most when we reach the foothills of the final climb; Roccaraso (Aremogna).

As you can see, the climb goes up in steps, with the toughest gradient coming in the first half. It’s 17km long and averages a lowly 4.8% gradient.

“The final climb is 17 km long, with an average 4.8% gradient. The first part is quite steep, with a short 12% stretch, followed by a deceptively false-flat drag (across the centre of Roccaraso). Seven kilometres before the finish, the route starts to climb again with variable slopes ranging from 4% to 7%. The final km has a 7% gradient. The home stretch, running entirely uphill, is 120 m long, on 6-m wide asphalt road.” (Extract from the Roadbook)

The nature of the climb means that there won’t be many time gaps at the end of the day between GC favourites and they’ll all more than likely come home within around 10 seconds of each other, if that. I think we’ll get a reasonably large group (of around 15-20 riders) at the end either contesting a sprint, or for one late attacker to jump out the pack and steal glory.

Looks set to be another good day in Italy. Although up to Roccaraso we might get a sprinkling of rain, but it doesn’t appear to be much and looks more likely to have already fallen by the time the riders reach the area. 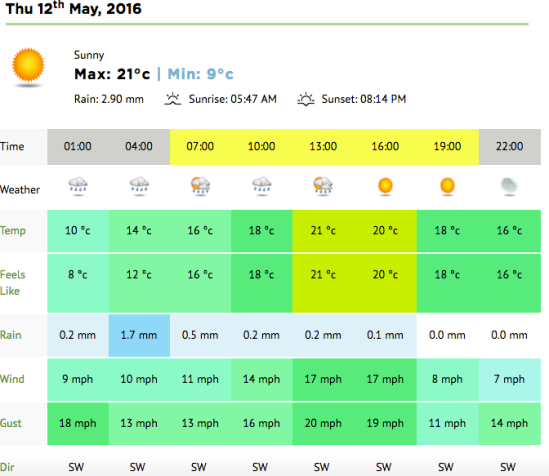 Who are the favourites?

Alejandro Valverde has to start as the favourite for a stage like this, it looks tailor-made for the Spaniard. The ramp at the end of the stage suits his characteristics to a tee and he should be the fastest sprinter left at the business-end. I wouldn’t be surprised to see him go on and win it, but I’m not convinced he will. The reason why I think he’ll struggle is the same reason why he struggled at Liege-Bastogne-Liege, everyone will look at him to do the work in the finale. However, the good thing with the profile of this finish is that he should have company from team-mates Amador and possibly Visconti, who he could rope into marking attacks.

Valverde won’t have it plain sailing either as he’ll have competition from the flying Italian Diego Ulissi and Maglia Rosa holder Tom Dumoulin who’ve both shown in the past two stages that they can pack a punch at the end of a stage. Both of these riders are very solid in the Ardennes and to find a potential winner here you have to look at someone with similar characteristics.

However, there is a chance that it won’t come down to a final sprint to the line. We saw this last year at the Vuelta, where Esteban Chaves managed to escape the favourites on the opening up-hill finishes. The smiling Colombian is here and he might try a similar move. I feel it will be to no avail though, as he’s a proven danger-man and the other GC favourites won’t let him get away so easily this time.

For someone to successfully get away they have to be not only in good form, but have to be regarded as not that much of a GC threat. Either that, or their main GC contender of a team-mate will still be in the bunch, creating opportunities for the “lesser” rider to attack.

There are several riders who fit this category that finished with the first-group on Stage 4 (showing good form); Brambilla, Firsanov, Roche, Preidler, Siutsou, Fuglsang, Formolo and Pirazzi. I would include Jungels in that list but with the Young Riders jersey on his back he’ll be more heavily marked. Taaramae isn’t included in that list either because of his crash today, although he seems to be OK. 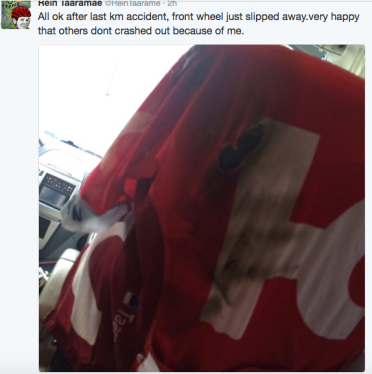 In my opinion the biggest threats out of those riders are Brambilla, Firsanov, Roche and Fuglsang. They all should be given a bit of leeway as the main protagonists of the race look at each other, with Brambilla and Firsanov most likely being the riders given the greatest amount breathing space.

I would also be wary of Siutsou. The Belarusian hasn’t been climbing spectacularly recently but he seems to be more of an attacking rider at Dimension Data and is the type of rider to try to go from far out. Although, with a poor sprint, he’ll need to make the final few hundred metres alone.

I don’t think a breakaway has any chance of survival tomorrow. With bonus seconds on the line, Movistar (Valverde), Lampre (Ulissi) and Giant (Dumoulin) will all probably contribute together to chase them down.

However, I think we won’t see any of them winning the stage tomorrow. Instead it will be one of the “lesser” riders that I’ve mentioned above.

Of those, I’d say Fuglsang and Roche are definitely the strongest climbers, which is both good and bad. Good, because it should be easier for them to escape, but bad, because they’ll be more heavily marked as they’re considered greater GC threats.

Therefore, I think it will be either Brambilla or Firsanov who goes on to take the win, either solo, or from a smallish bunch sprint, with the favourites coming in a few seconds down. Of the two, Brambilla has the best sprint so he could even win while trying to out-sprint Valverde and co. Consequently, he’s my pick for tomorrow.

He has a lot of fighting spirit as was shown in the handbags that him and Rovny shared at the Vuelta in 2014. That brought a whole new meaning to the term “puncheur”. Hopefully he’ll show the same attacking intent tomorrow!

Going to cover what I’ve written above with 3 picks tomorrow;

All with PaddyPower. Hunt around later when more odds are announced, you might get a better price.

It could end up being quite a dull stage tomorrow until the final climb, but hopefully we’ll see some attacks up it, and a Brambilla win! Enjoy wherever you’re watching it from. Anyway,