The race with the second longest name in the calendar (nothing on the Amgen Tour of California Women’s Race empowered with SRAM) returns this Sunday for its 5th edition. A quite unpredictable race to call, last year we saw Jay McCarthy take the win after a small group managed to escape over the top of the last ascent of Challambra.

However, that doesn’t tell the full story as some strong sprinters managed to come back to the lead group in the final 500m, with Viviani storming his way through the front group to come home second, while Impey rounded out the podium in third. It does show that the fast men can make it to the finale but it all just depends on the pace at the head of the race and of course team tactics. Before we get to all that, let’s have a look at what is in store for the riders.

Fans of the adage “if it’s not broke, don’t fix it”, the organisers have decided to go with the exact same parcours we had last year.

Although there a few climbs early on, this race is all about the circuit around Geelong.

The riders will join the circuit for the first time just before the foot of the Challambra Crescent climb, an ascent that they will have to take on 4 times throughout the race and the most focal point of the afternoon. 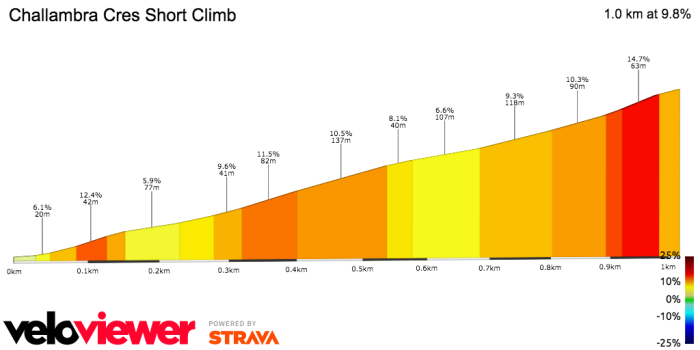 The climb is short but very punchy with some of the steepest gradients coming near the top. It is actually very important to keep something in the tank for the summit as things flatten out for a few hundred metres before heading downhill and a rider in the red can really lose a lot of time here if they can’t turn the pedals. Likewise, someone who has measured their effort can power on and gain quite a substantial gap.

A quick 2km descent follows Challambra before the last real hill of the day and attack point. 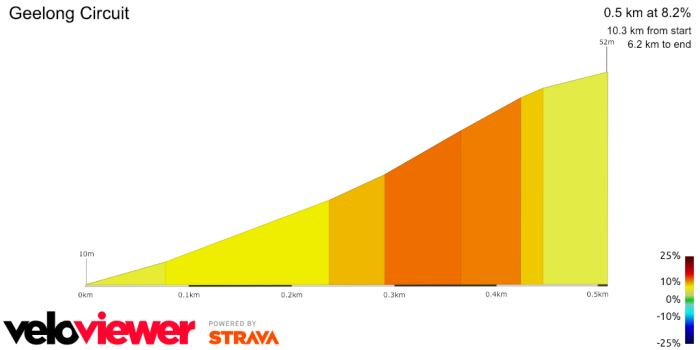 At only 500m long, it will be tough for some to get a gap but the steep gradients in the second half do make it possible. With it only being a shade over 6km to the finish after the rise, those chasing behind will need to co-operate well to bring any attack back.

The final kilometre is a very simple with a sweeping left hand bend along the Geelong waterfront but it could see a tactical finish depending on the race situation.

A very unpredictable race to call, it all depends on the attitude of the teams.

Last year the front group would have stayed away properly from the peloton had there been more co-operation, but with constant attacks and no one wanting to work fully, they just managed to hold on from the chase behind. In fact, it was only the race winner McCarthy who “stayed away” with Viviani coming through for second.

There are three possible ways the teams can approach the race: put the pressure on in the early laps and hope to split things up there; save it all for the final ascent of Challambra and try to get a group away; try to hold things together for their sprinter. Last year’s result will give the likes of Viviani confidence that they can make it back to the peloton but he’ll need some team mates with him to pace things and for those up ahead to not work together again – both of which are strong possibilities.

Looking at the teams who might want a larger sprint we only really have Deceuninck for Viviani, UAE for Philipsen and Lotto Soudal for Ewan: although I’m not too sure the latter two will make the finish. As for those wanting a reduced bunch sprint we have Mitchelton (Impey), Dimension Data (Gibbons), Lotto Visma (Van Poppel), Astana (Ballerini) and Bora (McCarthy). The rest of the teams will be looking to break things up early on, or on the final passage of Challambra so that a select group can stay away.

Up until a couple of days ago I was confident that things would be controlled here and that it would come down to a reasonable sized bunch gallop to the line. However, I’m not entirely sure of that now. Last year we had a few teams willing to help set the pace and control the breakaway but given the form of the riders, I can only really see Mitchelton and Deceuninck taking an active role to try to keep things together. We might have the likes of Visma and Dimension Data chip in but the majority of the work will be left to the aforementioned teams. Instead, I think we’ll see an attacking race because as stated, the form of Viviani and even more so Impey,  no one will really want to bring them to the line. The cooler temperature compared to last year could also entice some earlier attacks as the riders won’t be afraid of blowing up in sweltering conditions.

Saying all of that, some teams need to take things up before the last climb because although I think they can drop Viviani there and make sure he doesn’t come back, there is no chance Impey gets dropped there. The only way to beat him then is to have numbers to attack or to be confident in your fast man who has made the front group.

It would be interesting to see the reaction of Mitchelton if a strong move attacked on the penultimate ascent of Challambra – would they try to get someone in it or commit to a chase?

The rightful favourite for the race, Impey once again seems to find himself in great condition during the Aussie summer of cycling. I’m still not entirely sure if he would have won the TDU had Bevin not crashed on the penultimate day but given that he still managed to come home third on Willunga – he’s not going badly either. Mitchelton Scott will be 100% focused on controlling this race for him and I think they’ll try their best to keep things together until that final climb of Challambra. Dion Smith does offer the Aussie squad a plausible second option to play though. Getting a team-mate over the top with Impey will be crucial as they can just ride tempo and hope to keep things together for the sprint. With his current form though, I wouldn’t be surprised to see Impey going on the attack himself if he senses things are slowing down and a group coming up from behind. Everyone will have their eyes on him, but can he deliver under the pressure?

A switch of focus to the tougher sprints and classics for Van Poppel this year, he tested out his form in the TDU with a strong performance in Uraidla and a day in the break for the Willunga stage. We saw at the Vuelta last year, which was quickly followed up by Binche, that Van Poppel can handle the 2 minute power climb efforts very well and this race has been a target of his while in Australia. Lotto Visma has a team capable of keeping things together and with the likes of Bennett and Gesink they should have a couple of guys in the front group to work for the Dutchman. I think he’ll make the front split or not be too far off so that he can come back on the descent but he might suffer from the same fate as Impey – where no one will want to work with him and his team because of his far superior sprint. Ideally for both Van Poppel and Impey is that their teams have a couple of guys in the front split and they decide to share the work load, but will that be the case?

The first of my wildcard picks, I was impressed with van Baarle’s performance in the TDU and he seemed to be climbing very well. A rider for the classics, the 1km ascent of Challambra shouldn’t see him gapped too much by the proper climbers and I wouldn’t be surprised to see him right near the front. Sky don’t really arrive with a sprinter as such so I expect them to be one of the main driving forces for an aggressive race, pinging attacks off the front on every lap. As the Dutch TT champion, van Baarle has a good engine and if he gets a gap in the closing 5km it could be tough for a disorganised group to bring him back. Packing a decent sprint, he wouldn’t mind arriving at the line with a group of riders who escaped early on.

A blog favourite, it was good to see a few coming of age performances from the Bora rider in 2018 including a strong win in the Binck Bank Tour. With the defending champion on their team you might expect them to be working for McCarthy but with the Aussie suffering from a slight chest infection during the TDU, he might not have fully recovered for here. Mühlberger offers a solid option as he should be there or thereabouts on the climb and he might manage to slip away unmarked. He’s a longshot, but we’ve seen crazier things happen!

Despite the best efforts from teams to break away in the closing two laps, things are controlled by Mitchelton and Lotto Visma and we get a select sprint of around 15 riders, with no Viviani and van Poppel powers home to take the win.

Thanks as always for reading, who do you think will win? Anyway,