I did say that finish would be nuts and it was made even crazier by some thick fog which made it look like something out of a mythical film. Despite Euskadi Murias’ best attempt to entice some to bring the break back for the stage win, those ahead were left to fight out for the day.

It was a big slog and a group of four came through the Flamme Rouge together. Majka hit out early but faded, De La Cruz rode a consistent tempo but he lost contact with the main two. Teuns put in a strong attack but Woods stuck with him and the Canadian made one big dig to drop the BMC rider. They still had 500m to go and Teuns was slowly clawing his way back to Woods as he seemed to tie up a bit, but it was too late. The EF Education First rider takes the biggest win of his career and an emotional one too that he dedicated to his recent stillborn son.

Behind there was some movement in the GC. Mas and Valverde were the strongest and managed to take 8 seconds from Yates, with Lopez a further two behind. Not a severe time loss for the current race leader but is a small crack starting to show? He’ll be concerned that it is very reminiscent of his Prato Nevoso performance in the Giro that saw him lose a load of time the following day. Thankfully for him, there are no climbs tomorrow for him to worry about so he can rest up. The biggest losers of the top 6 on the day were Kruijswijk and Quintana who came home 1’04 behind the Mas/Valverde duo. Not ideal but not entirely catastrophic but it means they will have to be very attacking in the last two mountain days.

Anyway, let’s have a look at what is in store for the riders tomorrow.

A nice flat stage to keep the sprinters happy.

Nothing overly exciting to talk about here with only 1000m of elevation gain over the 186kms.

Within the last 3kms the riders will have to go through 4 roundabouts, with the last coming at the Flamme Rouge. They aren’t overly technical but do offer a good opportunity for a team to string things out.

It does rise to the finish line with the final 700m averaging 3%, making the timing of the sprint a lot more important!

Do you really want me to go through all of them again? I can’t imagine you do and I can’t be bothered to either…

Viviani starts as the clear favourite. His lead-out for the stage 10 win was one of the best I have seen in many years. Quick Step will expect to take control in the finale again but given the slightly more technical run-in there is a chance for teams to split up their train.

Nizzolo and Van Poppel have come close on occasion and both could be up there if Viviani has suffered the past few days. There is a chance for a “lesser” sprinter to steal a podium such as Consonni, Soto or Sarreau to name a few. Even Max “speed bump” Walscheid might actually make the finish this time!

Yet, there is only one man who I think can beat Viviani and you know what, I think he will.

Sagan has gotten stronger as this race goes on and he desperately wants one last win in the World Champ’s jersey. 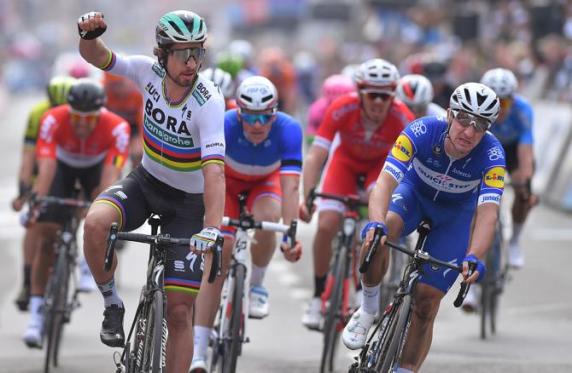 He wants it so much, that he and the team decided to change their plans of him leaving on the second rest-day so that he could race here and get some hard training in at the same time. One of the best bike handlers in the world, he will be able to guide his way through the closing kilometres on his own. The kick up to the line in the last kilometre should benefit him and as someone who times his sprints perfectly, I think he has what it takes to topple Viviani.

No bet, maybe Sagan on the exchanges later if you can get 5/1