Short preview as who can really be bothered to read/write about tomorrow’s processional affair!

Three of the strongest riders throughout the race fought out for the stage win while one faded. Dumoulin took home the day, beating Froome by a second.

Both of them were down on Thomas through the intermediate time checks, ceding 12 seconds to the GC leader. However, he slowed down in the final third. Either to coast home and take it safe, or because he thought Froome was going to win the stage? There was a lot of money being traded on Betfair even when he was smashing it, maybe someone knew something? That might be a conspiracy theory to consider for a few days and tide us over until San Sebastian!

This is where I probably have to put in some type of disclaimer so yeah, please don’t sue me, I’m poor: it’s just a joke.

Fair play to Thomas on winning the overall, he has been at a consistently high level all season. It reminds me very much of Wiggins in 2012 and Froome in 2015, Vuelta next for him?

Anyway, let’s have a look at what awaits the riders tomorrow.

A little scenic commute through some Parisien suburbs before the race heads into the centre and to the famous Champs-Élysées finish. 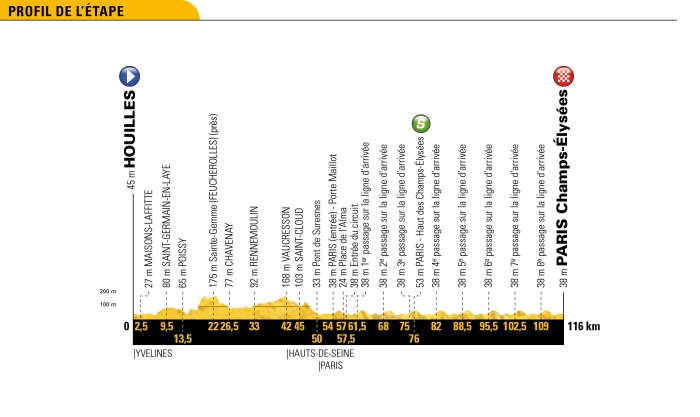 If you’re a cycling fan then you know the score for tomorrow, if not, well, here’s an image.

Few turns in the closing couple of kilometres that includes a very sweeping S-bend that leads onto the final straight. Potentially dangerous if the cobbles are wet, thankfully for the riders it looks as if it will be a dry afternoon/evening, albeit cloudy.

We could see a late attack stick for the first time in a while here. Although I am not discrediting it completely there will need to a barrage of constant attacks from strong riders to wear down the sprint teams. However, I think they will have enough motivation and there will be enough firepower to bring things back. Maybe. A big afternoon from Big T will be needed!

Démare – Will be confident after his win the other day. He was strong but certainly not unbeatable.

Kristoff – Disappointed not to have the legs but he has been close on numerous occasions. Needs to be in the perfect position to win but seeing as he has to go free-style, this is unlikely.

Sagan – Has he recovered from his crash? If so he will be up there fighting and probably winning. If not, he’ll just roll home and take the Green jersey. 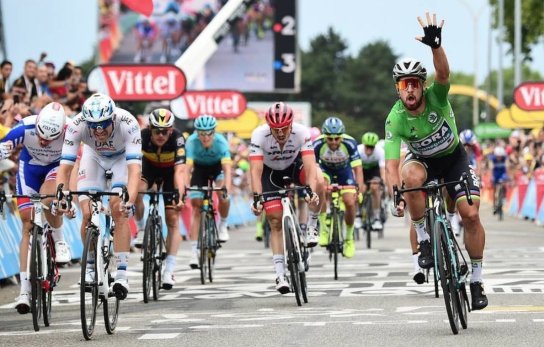 Laporte – Felt he got hampered by Demare’s slight drift on stage 18 but it looked like the Cofidis rider just didn’t have enough speed to beat him. Nonetheless, he did seem to be in good shape and he can’t be discounted.

Degenkolb – Has the luxury of the best lead-out rider in the race with Stuyven, he just needs to stick to his wheel. If Stuyven drives through that last S-bend and leaves his team-mate in the perfect position, he will be hard to beat.

Colbrelli – His chance to shine? He was too far back the other day but given the weakened field he would like to think he might sneak the win. It will be tough on a flat finish like this though.

Boasson Hagen  – A bit disappointing so far this race but he did finish 4th the other day. One of the more experienced sprinters here, has he saved some energy to go full gas tomorrow?

Cort – Will he be given the opportunity to sprint now that his GC duties are over? He was exceptionally strong when winning after a hilly break away on stage 15. Having won the final stage in Madrid before, can he repeat it in Paris?

Theuns / Arndt – A similar situation for the two Sunweb riders who no longer are on Dumoulin duty. No idea who would sprint but on a flatter effort like tomorrow I would suggest that Theuns is faster. He could be a dark horse for a podium on the day.

I’ve probably missed someone so apologies if I have, I’m tired.

I’ll go with a bit of a surprise win but I think Magnus Cort might be one of the freshest sprinters left in the race and that will play a big part in tomorrow. The Dane to double up and repeat his Vuelta final stage win! 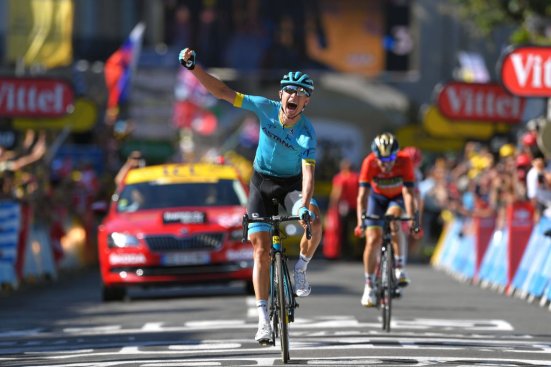 A big thanks to everyone has read the previews over the past three weeks, old and new readers, it has been some journey. Seeing everyone return every day really helps me to continue with the grind. I maybe (definitely) didn’t always choose the winner but I hope that my slightly flamboyant and different take on the day’s racing has been enjoyable to read.

If you have enjoyed the previews and want to show some appreciation with more than words then you can “Buy Me A Beer” via this link. Considering the amount of words and content I have put out, I think it is quite a fair deal to be honest. 😉

Don’t know who will be sprinting for Sunweb but I’ll take the risk on Eddie at that price.