Guess they were saving the best until last?

Really enjoyable stage to watch that had a bit of everything. Both of the nominated riders (Jungels and Nieve) made the early break but because Jungels was there, Katusha decided to chase and keep it close before launching Zakarin on the Tourmalet. Landa, Bardet and Majka followed and they eventually bridged to the original break of the day. Attacks flew from both the break and the peloton on the trio of climbs but things would ultimately end up with a group of 10 cresting the last ascent together.

Roglic really piled on the pressure on the descent and the elastic eventually snapped, with the Slovenian taking the stage win and leap-frogging Froome onto the podium. 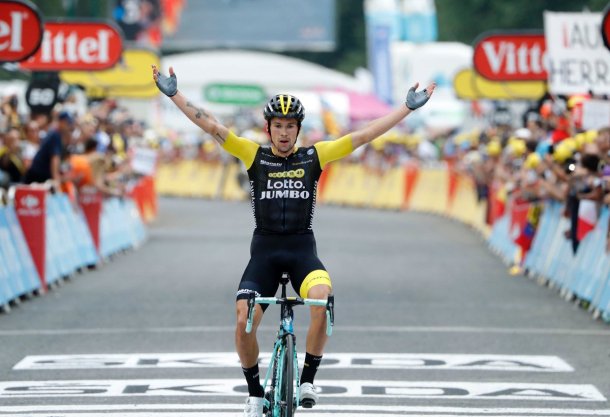 Thomas came home in second to take even more time on Dumoulin with Bardet rounding out the podium for the day. Let’s have a look at what is in store for the rider’s tomorrow.

TT day and the last chance for a GC shake-up. 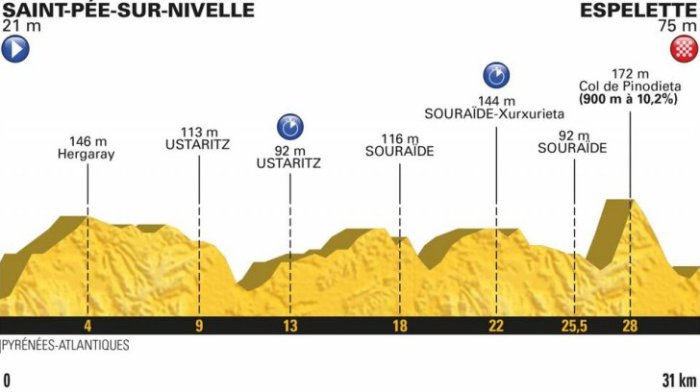 A quick glance at the official profile would make you think that the TT has some mountains in it but the climbs are exaggerated a little. However, it is a very rolling day in the saddle and certainly not one for the typical TT powerhouse riders, well, the non-GC TT powerhouses.

As is tradition, I’ve made my own Strava/Veloviewer profile that you can view here. 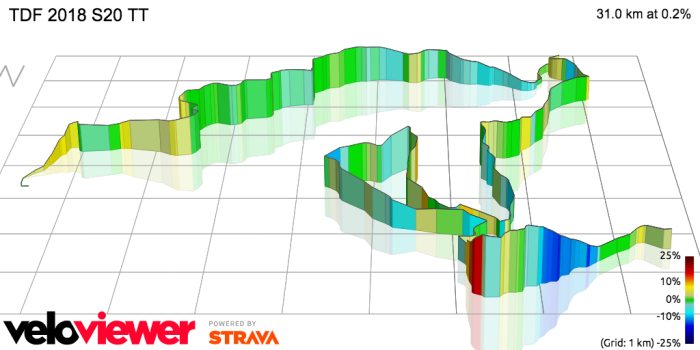 As you can see, it can certainly be described as rolling but almost more importantly the road seems to be constantly twisting. It might make it more difficult for some to maintain their tempo.

Facing a 1.2km climb that averages 6% only a few hundred metres into the day will set the tone for the riders. There are several more drags of 4-6% throughout the route but they only last for a few hundred metres. The biggest challenge they will face is the Col de Pinodiéta. 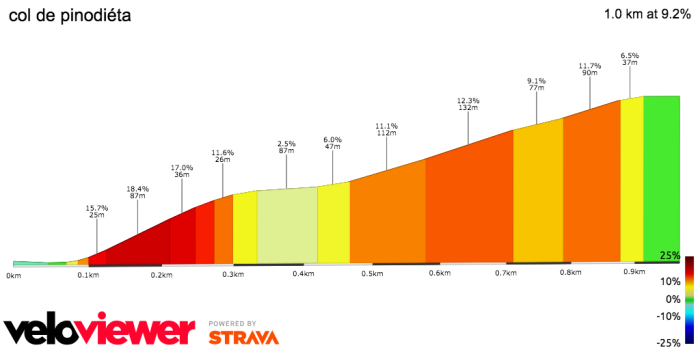 On narrow roads the steep climb is followed by a quick descent and only a shade over 1km of flat to the line, although it does drag from around 400m to go.

Has anyone in the peloton been saving themself for this effort? Possibly, but given the course and the way that the GC men are flying then I don’t think anyone else has a chance. Look at the final TT in the Vuelta last year for example. It was fairly easy with nowhere near as rolling a parcours as we have tomorrow and the top 5 on that day were the current top 5 on GC. I think we will see something similar here.

Current TT World Champion, he is a class act when it comes to the time trial bike. He’s looked strong throughout this whole race which is a surprise to me as I thought his Giro exploits would have taken something out of him. Still, he finds himself too far back to win the title so the big battle will be with Roglic and Froome for the podium positions and potential order. He was a little disappointing in the Giro TT and I think he might disappoint a little tomorrow too. His words after the stage made him sound like he was a rider right on the limit and with the way others were going today, I don’t see him winning the stage. At least we’ll get to see his very nice aero position!

The silver medalist at those TT Worlds last year, he produced a blinder of a descent to take the stage today. It wasn’t just on the descent that he looked strong though as he put attack after attack on the climbs today. He wasn’t explosive enough to fully distance everyone but his good legs were clear for all to see. One of the best in the World at this discipline combined with his scintillating form, he starts the stage as favourite in my opinion.

He’s looked even more ragged than normal over the past couple of days but he is still within touching distance of the podium. If there is anyone who can turn around their form in the peloton, it is him. Given what I have seen from him in recent stages I think he will fall short and not finish on the podium. However, I have been wrong about him in the past when I thought he was dead and buried, the TT at the 2016 Vuelta springs to mind.

Barring accident or any major (probably need several) mechanicals tomorrow, the Welshman has the GC wrapped up. The strongest rider in the race by far, he has fully taken advantage of his early GC position, just having to follow most of the attacks. However, he has shown with his two stage wins that he certainly has more in his locker than just the ability to attack. Will he want to push it and go for a third stage win in yellow? I think so.

Sky could quite easily put 5 riders in the top 10 with Castroviejo, Kwiatkowski and Bernal all potential challengers. Then look to the likes of Küng, Bodnar and Latour to make up the rest of the spots at the top of the order but I can’t see any of them winning it.

The freshest rider in the race wins, Geraint Thomas crowns his Tour victory with a third stage.

Roglic surpasses Dumoulin for second place on GC with the Dutchman just holding onto third.

Thanks as always for reading! Who do you think will win tomorrow and why? Anyway,