Stage 15 was a bit of an eventful day for the three blog breakaway candidates. Mühlberger got involved in one of the more promising early moves but given that he was in just a trio they were never going to be allowed away. Unfortunately that meant he didn’t have the energy to make the decisive break which happened to involve Valgren.

Majka attacked on the main climb of the day but was brought back on the run to the line by a chasing group of seven. Team tactics were played out and the three squads who had numbers in the group kept attacking and eventually they got away, unfortunately the Astana man who made the split wasn’t Valgren. Instead it was his team-mate Cort who would ultimately go on to win the sprint for the stage win!

Some unusual tactics from Izagirre and Mollema (who finished 2nd and 3rd respectively) as they pretty much just towed the Astana man, a known sprinter, to the line. Izagirre tried once to attack but that was it. Maybe they were just happy with the podium? A bit of a frustrating day though with Valgren looking so strong, another “what if?” scenario.

Then of course the third break pick Gesbert was involved in some drama during the stage when Moscon swung at him. A new and odd #HaugheyCurse that one. The Sky rider has subsequently been sent home by the organisers. Not ideal for the squad as they enter a tough few stages where having him to control the early part of the day would be vital.

Speaking of which, let’s take a look at what is in store for the riders tomorrow.

Mainly flat then some tougher climbs later on in the day. 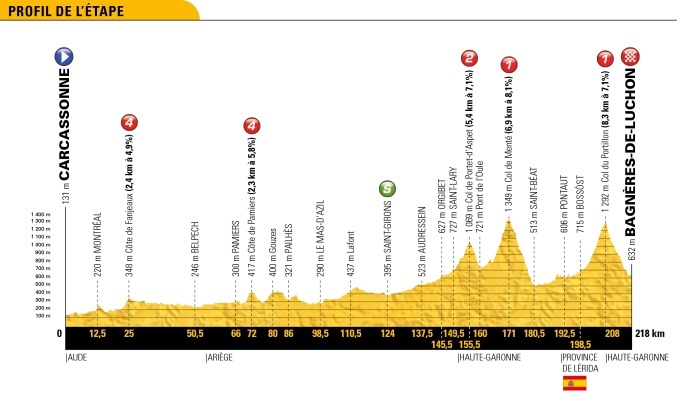 With 140km of mainly flat, slightly rolling terrain before we get to any serious climbing it will be interesting to see what the composition of the breakaway will be like. Given the tougher climbs to come then ideally a team would like a natural climber to get into the move but it isn’t exactly easy given the terrain!

The peloton will hit the first “proper” climb of the Col de Portet-d’Aspet at almost 150km into the stage. With an average of 7.1% it is fairly steep and typical of the region but at only 5.4km long it shouldn’t see any exciting attacks. The riders will then dive down the other side before climbing straight away once they hit the valley floor. The Col de Menté is a steep climb averaging 8.1% for a shade under 7km and this could be the scene of some long-range hail mary attacks from guys further down the bunch. With 47km to go from the summit and a lot of dragging valley roads to contend with, I’ll be watching along like…

After those said valley roads the peloton will tackle the final climb of the day with roughly 18km of the route remaining.

The Col du Portillon isn’t the toughest climb ever and the gradients are fairly consistent which should suit those looking for a steady pace. However, it is steep enough still that some damage can be done with a few stinging attacks. Arguably more important than the climb itself though, is the descent off of it.

With 10kms to lost ~650m of altitude it is going to be a fast run in. There are several tight hairpin turns on which the better descenders can put pressure on their rivals. This is all going to be exacerbated though given the weather forecast…

It’s meant to rain from mid-afternoon onwards with a few thunderstorms in the area causing heavy showers at points – not exactly sure how this 17.8mm of rain is going to fall in an hour, that is crazy!

Pfffft, it could be a day for the break but it could also be a GC day. It all just depends on who wants to control the afternoon. If it is just Sky that set tempo then they will no doubt be happy to let the break gobble up the bonus seconds ahead and then let the GC battle happen behind. However, with the 140km of relatively flat roads then it is easier for teams to control the break, especially if it is not that big. Do Ag2R, Jumbo and Sunweb come to an agreement and keep tabs on the move? We might even see a rogue UAE rider help out in the hope of a Dan Martin stage win.

If none of those teams decide they want to work then it should be a day for a break. The issue with choosing some riders to make the move is the amount of flat roads before the climbs will make it difficult for a mountain goat to be at the head of the race. Their best hope is that the break goes on the first Cat-4 climb but even then it will be difficult to snap the elastic.

We could see a really weird composition of 14 riders or so with one or two lucky climbers who make it. Of course, none of the other guys in the move will want to tow them to the climbs, especially the last one, so an attack in the valley roads is likely.

I’m not overly convinced with either outcome for the day but I do lean towards the GC riders fighting out for the stage. However, it would be foolish not to consider a couple of potential break threats, both of whom I have backed before. 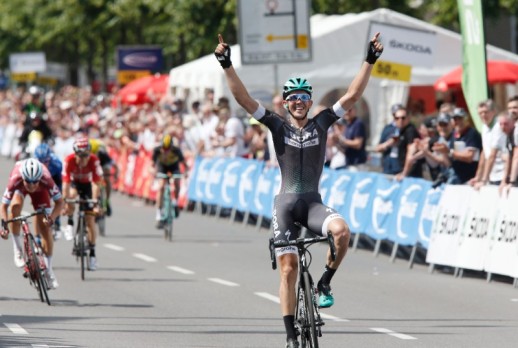 I still think he has a big win coming at some point in the near future. Unfortunate not to make the second decisive move after being in the initial attack trio that had escaped. Majka will probably be Bora’s go to man tomorrow but I think he might find it difficult to join the break on the flat. If so, the Austrian is a much better all-rounder and better equipped to do so. If we do get one of those weird week 3 breaks where no real climber makes it, then he is certainly one to watch. A demon descender, the rain will be of no issue to him.

Despite me saying never trust a man with two hooped earrings, here I am again. If only the Bahrain rider had stuck with Stuyven rather than complaining about Slagter’s work rate then he might have had a stage win. A strong climber who can descend well, he’s not too bad on the flat either. Bahrain will be keen to get several riders into the move as they aren’t too far off Movistar’s lead in the team classification. That could be an interesting battle over the coming days.

I think that Jumbo, Ag2R and Sunweb will combine forces to keep tabs on the break and try to attack Sky on the wet descents later on in the race. We’ve already seen one rider escape from a Sky based peloton on the descent and I think we’ll se the same tomorrow. Tom Dumoulin to win!

Want to cover the two break shots but also Dumoulin EW too as I think his price is too big so foregoing the 2pt rule. Was never really going to last, was it?

Thanks as always for reading! How do you think tomorrow’s stage is going to go? Will we see a break stick or will the GC riders contend for the win? Anyway,