Despite the chaos of many mechanicals and several crashes, the majority of the GC riders got through the cobbles unscathed. It was only Porte who abandoned and Uran that lost a reasonable amount of time. I’m sure most would have been happy with the outcome!

As for the stage win, a trio of riders escaped in the closing kilometres and went on to contest the finish. Degenkolb was left to open up the sprint from the front but he proved too strong for Van Avermaet and Lampaert, taking his first Grand Tour stage win since the 2015 Vuelta.

It was nice to see him on the top step again after it looked for a while that he would never return to his best after the crash.

With several mostly flat stages behind them, the riders attention turns to the mountains tomorrow as we enter the Alps. Let’s have a look at what awaits them.

No case of easing yourself into it here as we have 4200m of climbing in only 158km worth of racing.

The day features five categorised climbs but the lowly Col de Bluffy pales into insignificance compared with what is to come. I would expect a big fight to get into the breakaway and we might not see the move go until the Col de la Croix Fry (11.3km at 7.1%). From there it is a long descent before the road kicks up rather nastily with the very tough looking Montée du plateau des Glières. Averaging a painful 9.7% for 6.8km, the main crux of the climb is actually 11% for 6km!

A little plateau follows before a descent to the uncategorised Col des Fleuries (5.5km at 4.7%) which starts with 74km to go. Don’t expect much to happen over the next 30kms or so as riders and teams will regroup before the fireworks in the final 40km of the day. 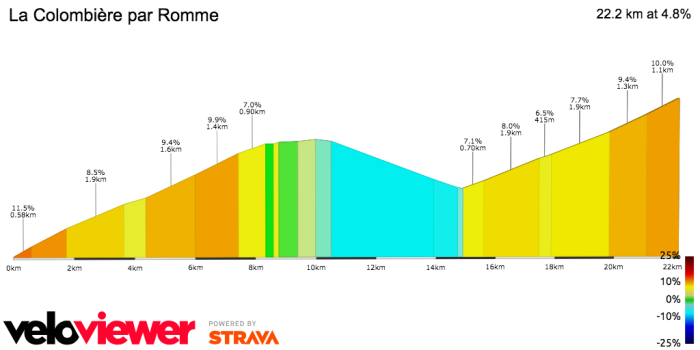 Taken alone the Romme and Colombière are difficult climbs but when they are combined together with only a 5km descent in between then they become very difficult. In the space of 22kms the riders will climb a total of 1400m. The descent will only offer a very limited time to recover, especially if you are already on the limit and someone decides to push on. Taking both the climbs together and removing the descent then it is 17kms at 8.2%. With the steeper gradients coming near the top of the Colombière it is a perfect place for some GC riders to launch attacks and distance some rivals.

Once over the top 12kms of descent await the riders before a flat-ish run to the line.

The descent will be fast with the average gradient being roughly -6% for the duration of the 12kms. There are some tight hairpin turns but they seem coupled together.

The final 2kms are mainly flat and the riders will have to be very wary of this turn that comes with just 1.5km to go. It is tight and as we saw earlier during the race those corners are never ideal. Thankfully, we shouldn’t see a massive group arrive here together. The last 1km drags up ever so slightly at 1.2% but the final 200m are at almost 8%. A nice little kicker to settle the day!

The first real mountain test of the Tour and it comes after the first rest-day. We’ll no doubt see some riders perform above expectations and some perform worst. Who will suffer the infamous jitters?

The age-old question of “break or no break?” for the stage win once again arises. It really is in the balance.

I tried to do some research on mountain stages after the first proper rest day of GTs. There were 6 definite mountain days, with one of them (Vuelta 2017) borderline but probably not given it only had a couple of climbs at the end of the day. Four of the six stages finished with a GC rider winning and it was only Giro 2016 (Ciccone) and Vuelta 2015 (Landa) that saw a break stay out. Even then, the latter was the only surviving member of the break with GC riders filling out the rest of the top 10.

Something to think about: a 66:33 split in favour of the GC contenders winning.

Given the current GC standings relative to Thomas, almost everyone will still think of themselves in contention for the title or podium come Paris at this moment in time. Only Van Garderen is really out of it. It could in theory lead to some defensive and tactical racing if everyone just wants to mark each other out, especially with the tough two days to come.

However, I think we will see some aggressive racing tomorrow between the GC guys as they will want to test the waters as to who is going well and who might have come out of the rest day not feeling in tip-top shape.

The Romme/Colombière double ascent should be tough enough to cause some splits if a team or two decides to push the pace on. Although Sky aren’t actually in the yellow jersey, I wouldn’t be surprised to see them ride tomorrow as if they were; taking control of the bunch and not letting the break have much leeway. As much as I want other teams to take control early, it will be Sky that decides if the break makes it or not because no one else has the firepower to keep a lid on things until the final two climbs, unless of course we have an alliance between a few squads.

Sky are notorious for going well on the first mountain stage of the Tour; in 2012 Froome won on Belle Filles with Wiggins third; in 2013 Froome and Porte finished 1/2 on Ax 3 Domaines; in 2015 Froome and Porte once again finished 1/2, this time on La-Pierre Saint-Martin.

They’ve actually not been as great recently with them allowing the breakaway win in 2016 (although Froome won a tougher mountain stage the next day) and Aru winning on Belles Filles last year. Have they changed their approach? Possibly, but I think Froome will want to lay down a marker to everyone else in the race but more importantly to his team-mate Thomas, and show him that there is only one leader in the team.

We also then have the Movistar trident to consider. Is it too early for them to go on the attack? Absolutely not. They need to be as aggressive as possible to wear down the Sky train so I fully expect them to go for it tomorrow.

Right, I’m nailing my colours to the mast and going for it to be a GC day and as I’ve rambled on for a while now I’m only going to name two guys who I think might be involved in the finish tomorrow.

An incredible second last year, Uran has been a bit off the pace this season but he has been slowly riding himself into form for this Tour. In 2017 he won a mountain stage that had a sprint to the line and will no doubt back himself for tomorrow if he arrives in a small group. He was the unfortunate GC rider who crashed at the wrong time on Sunday and it meant that the pace was on and he lost over a minute and a half to his rivals. That will have hurt him as the team rode fantastically in the TTT to put him in a very good position overall. Uran is a competent bike handler who is also attacking when he needs to and I think we’ll se him give it a nudge tomorrow.

Already a winner at this race on stage 6, the Irishman finds himself the furthest back of the GC contenders mainly due to a crash on stage 8 that saw him lose 1’16 to the rest of the peloton. A very attacking rider, Martin was flying in last year’s Tour until he was involved in Porte’s crash that ultimately put him out of contention due to riding with injury for the following 2 weeks. He still managed to finish 6th overall then, not a bad result! This year he has struggled but from the limited bits that we have seen from him since then he seems to have found his mojo again and looks the lively Martin that we all know. He won’t want to wait a few days to test the waters and given that he is quite far back from the rest of the contenders, he might just be given the freedom by them to go on the attack. There won’t be many who can match his kick up the small ramp to the finish.

Dan Martin to take his second stage win with a perfectly timed late attack. Some GC riders will falter tomorrow but I have no idea who, it should be a great watch!

One of those stages where it is probably best to back something in-play but for the sake of the blog and the spreadsheet:

Both of those prices are with 365 but they are pretty similar elsewhere. I would obviously recommend going on the exchanges if you can as the odds are much better there!

Thanks as always for reading. Who do you think is going to win tomorrow and how? Anyway,