Another chaotic sprint and that corner with just under 2km to go that I warned about in my preview yesterday proved to be at the centre of it. There was no room for some riders to come up the inside like they wanted and were forced outwards as the corner was more than 90-degrees and we unfortunately had a crash that took out a few of the stage contenders. Thankfully it was at a slightly slower speed so no one seems too injured from it.

That left a group of only 14 riders at the head of the race going under the Flamme Rouge to contest the stage win.

Démare tried to catch everyone off guard by going slightly early but Sagan was alive to it, brushing off Degenkolb as he latched onto the FDJ rider’s wheel. The World Champion then accelerated out of the slipstream and managed to hold on for the win, edging out the charging blog pick Colbrelli who finished a wheel length behind, with Demare coming home in third.

That result means Sagan is in yellow going into tomorrow’s stage. Let’s have a look at what is in store for the riders.

Although there are a few roundabouts and turns to contend with in and around Cholet, the majority of the route is on a wide-open main road. Expect this to be a fast one!

Saying that, there are plenty of smaller roundabouts out on the route but most of them are relatively straightforward and they shouldn’t cause too many issues. The only thing teams will need to be wary of is their change-over as the timing will become more important near the roundabouts.

As is tradition with any sort of time trial I have made my own profile on Strava/Veloviewer that you can view here.

The course features many short drags, but the first of which comes after only 1km and averages 2.7% for 2.1km. Nothing too tough bit it will make the teams ponder their pacing strategy a bit more. The next comes at 16km and is 1.8km at 3.3%, with the final major incline starting at just over 25km, with an average of 3.8% for 1.6km but it does include a steeper section at the bottom with 700m at 6.9%.

The final 10km are mainly downhill so it will be a fast and frenetic run in.

Weather wise it appears that all the teams should face similar conditions, with a consistent 20km/h wind coming from the north north-east.

It’s going to be a bit of a weird watch tomorrow with three of the favourite teams for the stage heading off within the first five outfits down the ramp. Of course, the squads will head out at 5 minute intervals with them going in reverse Team GC order, although Bora will be out last as Sagan has Yellow.

First team down the ramp the Aussie outfit sacrificed bringing Ewan with them to the Tour so that they could focus on this stage a little bit more, choosing to have a group of strong rouleurs to help Yates as much as possible. That has somewhat backfired a bit after the opening two stages which have seen the Brit on the deck twice, with Impey and Durbridge both falling today as well. Will that have an impact tomorrow? Unfortunately we and probably them too, won’t know until they are out on the road. Matt White sounded confident in a post stage interview today stating that they will be up there fighting for the win but I’m just not sure after this afternoon. They were podium challengers but I think they will be happy with a top 5.

Second down the start ramp, Sky will be looking to take as much time as possible after Froome and Bernal’s bumps in the opener, we could even see Thomas in Yellow for the second year in a row. Sky absolutely smashed the 35km TTT in the Dauphine where the averaged a crazy 57.456km/h, putting 38 seconds into second placed BMC. Their outfit at this race is arguably even stronger and they won’t have many passengers. I would expect Rowe to fall away at some point but aside from that they will most likely come home together. Will that extra fire power help them? Given the nature of the course and the quality of their team they start as the stage favourites.

It’s a TTT which means that the American team will inevitably be up there fighting for the win. They will miss the likes of Dennis and Scotson but they do have a very strong and well-rounded squad with them. One of the best drilled outfits in the peloton they will be fully up for this. Having the slight advantage of time checks on the two teams mentioned above, albeit they don’t start that much later than them, should help them pace their efforts a little better. Could we see Porte claw back some crucial time on his rivals?

The current World Champions will start 9th from the finish tomorrow so they should know time finish times of Mitchelton, Sky and possibly BMC by the time they set off. This will be a massive advantage to them as they will get an idea of the other teams pacing and where time could be gained/lost. Their squad is made up of a lot of strong riders, including three of the six who won that world title. In Suisse they placed an impressive 4 riders inside the top 12 in the final TT so they are clearly in good shape. Can the World Champs be classed as an outsider? They will be there or thereabouts.

The only other team who I can see contending for the win/podium are the Belgian outfit. Back in the day they were experts in this discipline but they seem to have lost their way a little over the past couple of years. However, we’ve seen the might of their lead-out train so far in this race – they just need to keep that up for another 30km! They don’t have many great individual TT riders but as a unit they are very strong with a bunch of solid rouleurs. A win might be out of reach but they would be delighted with a podium.

This is a tough one to predict but I’ll go with the classy TTT team here, BMC to take the stage and Van Avermaet to go into Yellow. It will be very close between them and Sky though! 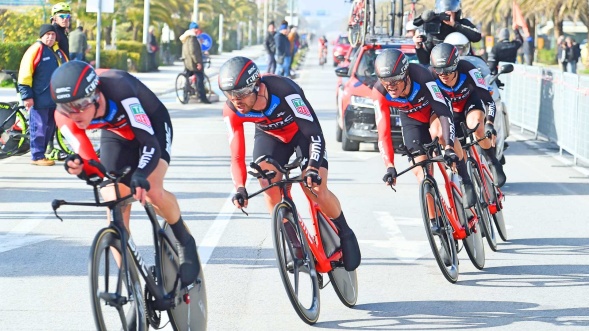