For a while it looked as if it was guaranteed the break was going to make it, then with the weather turning sour and Katusha coming to the front things were quickly closed down to under 2 minutes before the start of the climb. The gap was cut again when Groupama got a bit frisky, making it only 1 minute with roughly 8kms left. However, things slowed a bit and the gap was just whittled down ever so slightly over the next little while. With 3kms to go and 25 seconds advantage, blog pick Bouwman made a move and immediately dropped everyone else from the break. Montaguti tried to bridge but couldn’t, meanwhile in the peloton Froome crashed going uphill for a bit of unusual comic relief for the day.

A couple of attacks were launched from the peloton with Richard Carapaz flying out the front of the bunch and no-one wanted to, or could follow. He quickly caught up and passed Bouwman at roughly 1km to go, continuing his charge to take his first Grand Tour stage win.

Behind Formolo finished second, showing that he still has good legs despite his blow up on Etna, with Pinot coming home in third to take a few bonus seconds.

The GC stays pretty much the same aside from a few movers, with Yates leading heading into the last stage before the second rest day. Let’s have a look at what is in store for the riders.

After a pretty tiring stage today, I’m sure the riders will be less than pleased to see that they’ll be doing 225km tomorrow.

4000m of climbing and a finish at altitude, it could be a very good watch!

The day starts off with some rolling terrain but there is nothing too tough for the riders to worry about in the opening 80km. They’ll face an unclassified climb then which averages 4.7% for 8.5km – a nice little warm-up for what is to come. The Cat-2 Roccaraso follows. Again, it is not crazily difficult but it does have several kilometres at over 7%. It is too far out for any action.

The climb of Calascio is steady, averaging a solid 6% for 13kms. The riders well then face a long period of “easy” climbing, with the gradients averaging well under 4% for the following 30km. But with the road almost always rising, it will start to build up the lactate in their legs for what could be a punishing finale. 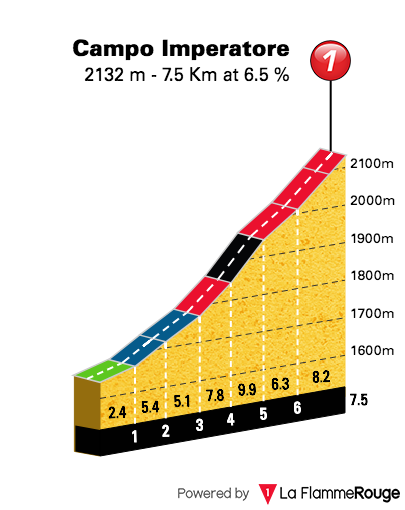 The final 7.5km average 6.5% and taken alone that would be a pretty interesting finish to the day. However, when you consider that it takes place north of 200km in the legs, then it should make things exciting. The last 4km averages roughly 8% and we could see some fairly big GC gap here if there are some tired legs in the bunch and things get wild.

Break or no break?

Hmmm, much like today it could really go either way.

It is a long day out in the saddle and it will be hard for one team to control everything in the peloton, so it will need a considered effort from a few teams to keep things within touching distance. If someone sneaks into the break that could be a danger on GC then it could spell the end for the break before it has begun. I think we’ll see a big fight to get into the morning move and the majority of teams will want to have at least one, if not two guys up the road for later in the day. Will there be enough co-operation ahead for them to stay away?

There are a couple of teams who were fairly quiet today, namely Astana, although they did have Villella in the break, who I imagine will try to throw a few cats among the pigeons tomorrow. Will they go for the stage win from the break or try to control things to set up Lopez? The Colombian does have previous on summit finishes at altitude – he taking a spectacular win to Sierra Nevada at the Vuelta last year.

Interestingly, after today’s stage Chaves said in an interview that he thinks the break will make it all the way.

I really can’t make up my mind, I’m well and truly on the fence! There are valid points to both arguments, I’m struggling to fully commit to one side. So I thought I’d have a look at stages before a rest day in previous Grand Tours (the past three years) to see if there was any pattern.

Not really as conclusive as I would have hoped for but the GC days edge it 4 to 2.

The issue that I keep coming back to though is the length of the stage tomorrow. At 225km, it really is tough for the GC teams to keep everything within touching distance if a strong group goes away, especially on the rolling terrain the riders will face. Then again, you could argue a motivated chase behind will eat into a tired break on the closing 45km climb…

As I hope we see two races in one tomorrow, I’ll break tradition and say that the break actually makes it. 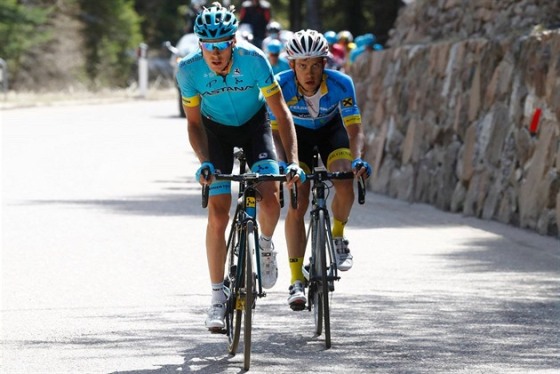 Joking aside, Hirt is strong enough to win a stage like this. He’s the perfect Astana rider to get in the break as he is a very competent climber but is far enough down on GC not to see any chase from Mitchelton. Sanchez is another option for them but he could compromise the move given he is less than 5 minutes from Yates.

Given that tomorrow’s finish is a tribute to Marco Pantani, I have to include the Bardiani rider who climbed Mt Etna in the drops. He was unlucky on that day as he definitely seemed the strongest from the breakaway, just a shame for him that the GC guys came out to play. Since then on the past few stages he has rolled home saving plenty of energy. Enough for a dig tomorrow?

Wellens has lost time on a few stages so that he can continue to chase more wins rather than go for an ok GC position. He was involved in a tangle today but seems to have come through unscathed, instead rolling home pretty far down the order. Active early on this afternoon, he didn’t make the break but he is certainly lively enough to try again tomorrow. This year he has really taken a level up and I think he can cope with the final climb. Interestingly, his maiden Grand Tour win was at the Giro in 2016 on Stage 6 where they happened to finish on Roccaraso (although it was a different approach) which is the opening categorised climb tomorrow. More of the same? I hope so!

A classic day of backing some break riders then turn to GC riders if it looks as if it is going to be for them.

Buy Me A Beer (Coffee)

I’ve been slacking with my shameless self promotion recently, mainly because I am quite ashamed but if you’ve enjoyed the previews so far then you can “Buy me a beer” via this link and thank me for losing you some money!

Thanks as always for reading. Who do you think will win tomorrow and how? Anyway,