Well that was a great stage!

Attacks kept flying from the gun and it took over an hour for the break to eventually form, which saw a 25+ rider group get up the road. Chaves and Henao, along with a few others close on GC snuck their way into the move which made for a very interesting afternoon. As a result the move was never given too much leeway but they started the climb with over a minute on the peloton. The gap varied on the first 10km of the climb before we saw Chaves explode out of the already reduced break. He quickly built up a lead over the rest of the group who were soon swallowed up by the GC contenders. Probing attacks were made and a group including Pozzovivo, Pinot, Yates and Bennett managed to get a gap on the rest of the field. However, their unwillingness to properly work together saw things regroup. Meanwhile Chaves soldiered on ahead, maintaining a 25 second advantage going into the final 2kms. Yates then took advantage of being on the other side from the road of everyone else and as they all were looking at each other, he took off in pursuit of his team-mate. He closed the gap to Chaves remarkably quick and the two of them completed the final few hundred metres together, with the Brit allowing his Colombian team-mate to take the stage win. 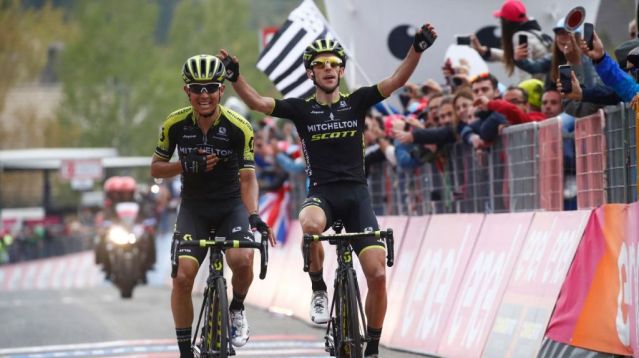 Pinot won the sprint for third from the remainder of the GC group with none of the big GC favourites losing any more time than the 26 seconds they ceded to Yates and Chaves.

The result leaves Yates in the Maglia Rosa and looking at the Mitchelton squad, they certainly have a strong and well-rounded line-up to defend it for a while. Thankfully for them they should have a fairly easy day tomorrow as the sprinters most likely get their chance into Praia a Mare.

Let’s have a look at exactly what is in store for the riders.

An almost pan-flat day but with an interesting little kicker near the finish to entice some attacks.

Not much really here to talk about until we get to the 140km mark and even then, it is nothing too remarkable. 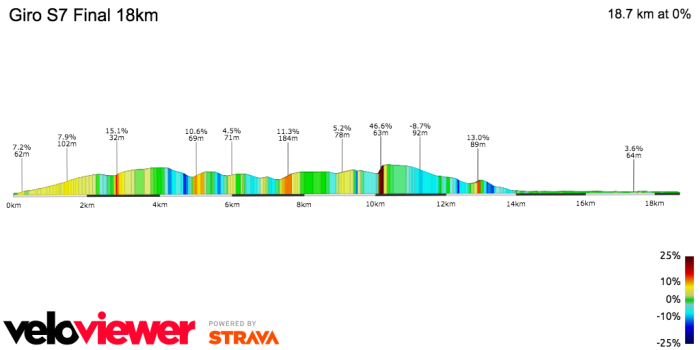 The terrain rolls for over 12km with the major focal point being the 4km climb at 3.6%. It shouldn’t be too tough for the sprinters but it will certainly offer up a chance for some to make a bold attack. The continual up and down until the final 4km gives them an opportunity to make it stick, but given the wide open road then it will be tough for them to get away fully. 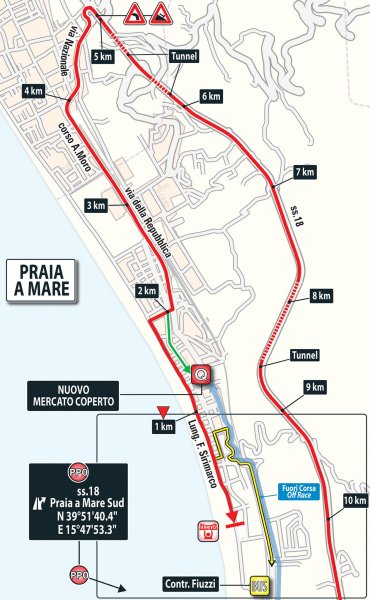 The riders will descend through a tunnel which could be a bit sketchy and we do have an elongated chicane at around the 2km to go mark. However, aside from that the finish is simple and it will be a drag race between lead-out trains.

Most likely yeah, but given we’re almost into the second week of the race tiredness will start to kick in for some riders and they might not be as keen to chase all day for a sprint. Today’s stage was fast right from the gun and that will certainly have taken a lot out of the sprinters so I would say the break has more of a chance than normal on a stage like this but even then it is still unlikely.

One thing that might favour the break is that the rest of the sprint teams need to try something to get an advantage over Quick Step. Not contributing to the chase would be a good start and they could send a man up the road as the perfect excuse.

If we see maybe 3 of the sprinters team send a guy in the break it could work. No doubt though we’ll see a group of 4 squirrel off and it will be controlled nicely all day.

Can anyone beat Viviani then?

Yeah, but they will need a combination of luck and great legs. They’ll be hoping the Quick Step rider struggled a bit today.

However, it will be very tough and I can’t really see it happening but you never know.

Modolo – Closest to Viviani on Stage 3 the EF rider has quite a good lead-out that can get close to Quick Step. He was with the peloton on Stage 5 before completely blowing up on the final climb but his legs must be good to get there.

Bennett – Hesitated on stage 2 and then went early on stage 3 and faded, probably as he cycled a few more metres than anyone else. Selig withdrew the other day and that will be a big loss for him. Bennett has beaten Viviani before this year, he just needs to remain confident.

Mareczko – Wilier have a lot of faith in the young sprinter as they’ve had almost all of their squad back helping him get through the past few stages. Will they have taken too much out of him?

Bonifazio – 4th in the opening sprint but was caught out by the winds on stage 3. He was good in helping bring Pozzovivo back to the front in stage 5 so I think he has fairly good legs. Sometimes he has good days but often blows cold.

Van Poppel – Jumbo’s short lead out hasn’t worked so far but on a simpler finish like this is should help them. For raw power I think DVP can get close to Viviani, he just needs everything to click.

I’d like to see a break stay away to spoil the party but I just can’t see it happening. Viviani to take yet another stage win. 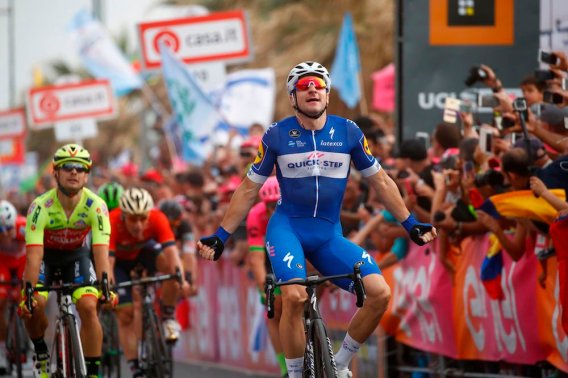 I do think Van Poppel can get onto the podium tomorrow though.

Hmmm, could be a no bet day but I’ll go with:

I might have a dabble on some potential break riders on the exchange but nothing stands out for me atm.

Venturini to beat Debuscherre at 6/5. (5pts on)

Debuscherre seems to have lost his sprinting legs quite a while ago and I think the AG2R rider is faster than him. On a finish that should be about pure speed and power, I favour the Frenchman.

Thanks as always for reading, who do you think will win tomorrow? Can anyone stop Viviani? Anyway,