After a disappointing performance on Sunday, Michael Matthews bounced back excellently today to take the win on a course that suited him perfectly. 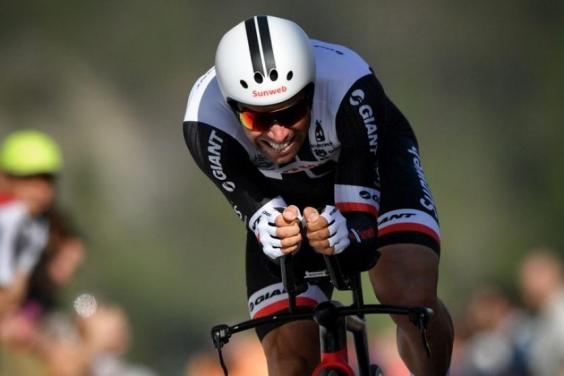 I’ll hold my hands up and say I got it wrong as I hadn’t expected him to have recovered from Liege, oh well! Behind him, Swiss rider Tom Bohli confirmed his explosive TT potential with a strong second place, with blog pick Primoz Roglic only managing to finish third.

Dennis was edged off the podium but he, Bohli and Roglic all finished just one second behind Matthews in what was a closely fought day. Interestingly, Matthews made a lot of his time on the slight downhill first section, with Dennis and Roglic gaining 5 seconds in the latter part but it was not enough for them.

Can the Sunweb rider hold on to the leader’s jersey tomorrow? Let’s have a look at what is in store for the riders.

A rolling day that hopefully should tempt some attacks from the bunch later on in the afternoon.

The early climbs will more than likely see a fight for some KOM points between the breakaway and the honour to wear that jersey but the battle for the stage win comes down to the lap circuit around Delémont.

As per, I’ve made a Strava/VV profile of the closing lap that you can view here.

The opening climb of the circuit is the toughest with the Col du Sommet averaging just over 7% for 5.1km. 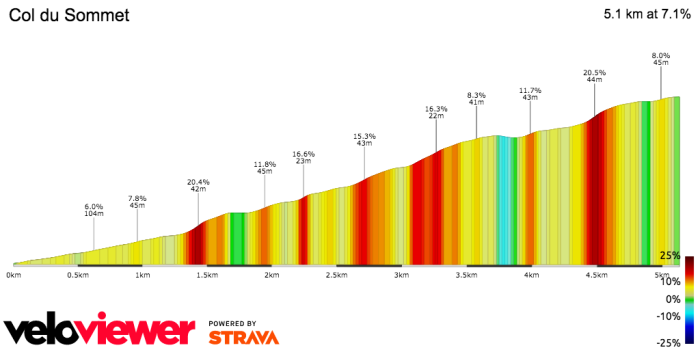 As you can see on the profile above, it is a climb that seems to go up in steps with quite sharp rises of gradients at some points. This should in theory make it difficult for some riders to get into a good rhythm and it might lend itself to a more punchy climber who likes to accelerate and decelerate.

Once over the top, the riders will face a 5km descent that isn’t overly technical and it is one that they will have to pedal on as some of the gradients aren’t too steep.

The road then kicks up again with the uncategorised ascent of Prés Sur La Croix. Or at least that is what the Strava segment is called.

At an average of 4.3% for 3.1km most who made it over the previous climb should make it with the bunch here. However, with the final kilometre of the ascent averaging a more challenging 7%, it could be a perfect launchpad for an attack. There is around 600m of plateau before the road plunges down again, so it will need to be a committed attack to distance anyway. Conversely, an attack could even be made on the plateau as everyone looks around at each other.

Once onto the next descent the riders will only have 10km left, of which 6km are spent going downhill. It is much steeper this time so any gaps made previously will be hard to bring back.

The final 4kms have their own challenges though with a 4% drag halfway through and a 300m, 6% kick up to the line on narrow roads: which would be interesting if we get a reasonable sized bunch come to the line.

Tomorrow is one of those really weird days where almost anything could happen.

If Matthews doesn’t fancy his chances of holding on to the overall then Sunweb might call everyone’s bluff and we could see a break take the win. Conversely, the day could be raced at a pretty slow pace and he makes the finish and consequently doubles up.

It could quite well turn into a GC day but that all just depends on the approach of the riders. After all, it is only tomorrow and stages 2 and 4 which could shape the outcome of the race overall. Those looking to gain time might seize an opportunity and make it an aggressive race.

That situation then leads onto the possible late attack sticking, or will it be a very reduced group sprint?

Personally I think we will see something similar to what we had in the Alps recently, with tomorrow turned into an aggressively raced GC day with either a solo, or group of riders escaping. However, with the way the finish is, it will be hard for any big gaps to be made unless there is a complete stall in the main group. Which is possible.

I could name a multitude of riders who might have a chance tomorrow given the unpredictability of the stage but I don’t want to be here all evening so I’ll just stick to a few. 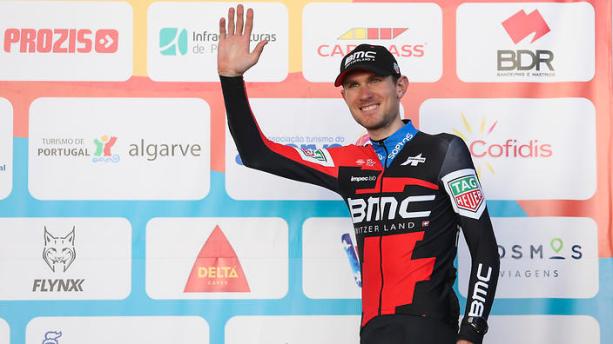 Somewhat disappointing today but the prologue never has been a speciality of his, the American will enjoy being back on the open road for tomorrow’s stage. I expect BMC to have quite a few guys in the head of the peloton as it is whittled down but I’m not too sure they will wait for a sprint with someone like Dennis. Instead, I expect to see them attacking on the lap circuit in an attempt to make the race as difficult as possible. Van Garderen was to the fore in Finistère but was caught not too far from the finish and his pretty poor sprint saw him finish in 8th. I think he has some good climbing legs at the moment but he will probably need to arrive solo to the line.

Another team who should have numbers near the head of the race are Sky. Rosa, Thomas and Bernal all placed within the top 12 today and give them great options for a stage like this. Although the young Colombian is returning from the terrible crash in Catalunya that cost him his first WT stage-race GC podium, he appears to be in good form from first viewing. He is one of the most talented riders in the peloton and I don’t think he will be to far off his Catalunya level. That will scare the other teams as he was the only one who could match a flying Valverde then, even taking the race to him on the last stage before the unfortunate crash. He packs a surprisingly good sprint so he will fancy his chances in a gallop to the line against a handful of others. Will he be granted the freedom?

If Matthews falters then Sunweb could possibly turn to their young Belgian rider to get involved in the finale. Vervaeke had a strong start to 2017 before over-training and burning himself out. This season he has taken a slightly different approach and it seems to be paying off as he slowly rides himself into form. A very strong climber as a junior and U23, can he roll back the years this week?

The former German champion is another who has had a slow start to the year but he showed in the recent running of Itzulia that his form is now starting to pick up. He finished a very respectable 4th on GC in that race against some strong riders. Arriving at this race as Bora’s “protected” rider, he will be unfortunately be left with little help in the mountains as half of the team is sprint-based with only a returning from illness Kennaugh and Poljkanski to help. I think he might be isolated quite a few times at this race! The best form of defense is attack as they say, so it would be good to see him being aggressive tomorrow. He’s not a slouch in a very reduced sprint to the line.

The teams to ride an attacking race with the limited GC days that we have here and we’ll consequently see a small group of guys escape on the final lap. They all might not be the obvious favourites for the overall win, but with the majority of the stronger teams represented, the move stays away.

Bernal bounces back from Catalunya disappointment by taking a powerful sprint victory!

I know I didn’t name Roglic in the list above but if he is climbing as well as he was in Itzulia then he has a chance of escaping and possibly riding solo to the line. As we saw in that race as well, he is no slouch. The price is too big to ignore.

Thanks as always for reading. How do you think tomorrow’s stage will play out? Anyway,