Primož is a male given name, the South Slavic form of the Latin “Primus”, meaning “first” or “best”.

Taken straight from Wikipedia (I’m sure my old university tutors will be shaking their heads) but after today’s stage the above statement rings true. He didn’t win it in exactly the way I thought he would, but he was the brave one to risk an early attack.

No one was going to catch Roglic with the gap he had in the final 500m and he took a “comfortable” win in the end! Behind, an explosive Yates bolted from the pack but he could only manage second with Benoot continuing his impressive streak of form to take third.

The result moves Thomas into the overall lead with the Queen Stage to come tomorrow. Let’s have a look at what is in store for them the riders!

Another 200km+ day in the saddle which will not please some after today’s exploits.

This will be a brutal day in the saddle given the incredibly jagged profile we have; the road is either up or down for 100km in the middle of the day with very little respite. It will be a stressful day out! Furthermore, the number of climbing metres total 4704. Ouch!

Given Sky’s dominance at this race, it will be very hard (and unwise) to see anyone try anything from too far out. Unless of course other teams try to join forces. I would love to see that but I just can’t see it happening. Therefore, it will all come down to the final climb. 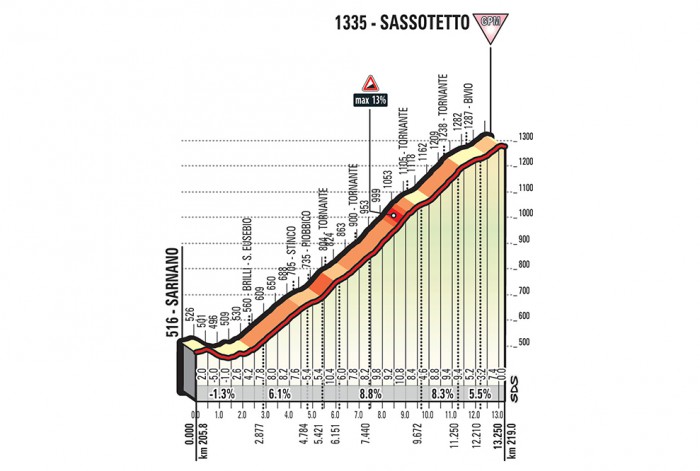 Using the profile above, the climb is 13.25km long at an average of 6.1% but as you can see, they descend for a little just as they come out of Sarnano. A more accurate representation is 11.75km at 7.14%; long and steep!

The main thing that makes the climb difficult is that it has many long sections above 8% with a few kilometres of “easier” gradients that keep the total percentage down. For example, the middle of the climb (from 5.5 to 9.5km on the profile) averages a leg breaking 8.8%. This is steep enough for big gaps to be made.

The riders will face a slight headwind on the climb which might deter some of the action but hopefully not as the road does twist and turn which means they aren’t ploughing straight into the wind all the time. 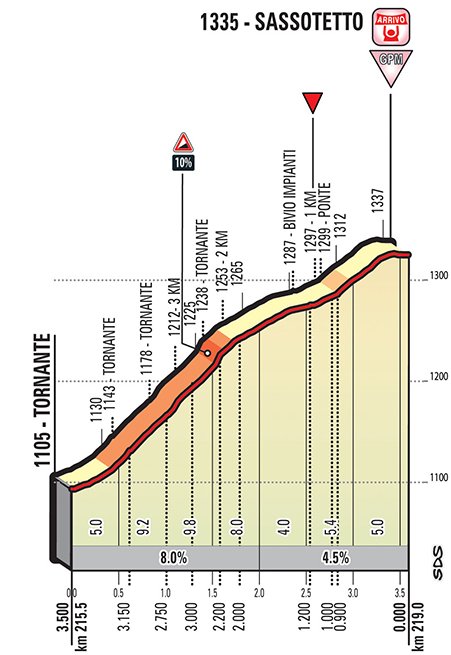 Interestingly it does ease near the top with the final 1.5km only averaging 4.5%. Will someone have made the race winning move by then or will we see a small group of GC contenders come to the line for a bunch sprint?

There is a small chance, like always, that we might see the break hold on to take the stage win but it is unlikely to happen in my opinion; I think we have “control freak” Sky at this race.

Given the severity and length of the ascent, only the best climbers here will be able to compete for the win. Furthermore, the distance of the stage in general has to be considered as some really struggled today and it will be the same tomorrow.

The current leader of the race has the luxury of the strongest team and he should have a good number of riders left with him at the foot of the climb. Even if we see some crazy things early on, then Sky should have at least 3, if not 4 riders with Thomas. They’ll be able to set tempo and control affairs on the footslopes of the climb but he might have to do it himself if we get attacks on the steeper sections. Thomas was closest to Quintana on Terminillo last year and an equally good performance here could see him fighting for the win. He packs a good sprint which could be key.

Will we see him on the attack? Sitting only 3 seconds down on Thomas, he might be given the license to go on the move on the final climb, forcing others to chase and allowing Thomas to get an “easy” ride behind. He’s had an ok start to his season but he does seem a bit fatigued and laboured – although that is his normal style on the bike anyway! Like anytime he races outside the Tour, I wouldn’t be surprised to see him win or come 20th.

The Movistar man won’t fear the steep gradients and long climb, in fact he will relish it. He started off his season in surprisingly good form, considering he normally takes a few races to get going. The Sky boys will be scared of Landa, knowing what he can do. Will it be Landani to take the win?

A rider who goes well in the classics but as we saw at the Tour last year, can climb with the very best too. He was going well back in his home country of Colombia but I’m intrigued to see if that form has continued back in Europe. A 5th place on today’s stage suggests he’s going fairly well. Uran is a big danger for the stage win compared to some of the other GC guys because he packs arguably the fastest sprint out of the lot.

Strong on today’s final climb, he left it just too late to catch Roglic but it was an impressive performance nonetheless. He’s not afraid to attack and we all know he’s very competent on the steeper stuff. Quite far down on GC (almost a minute) will he be able to get a gap and hold it?

None of the above win though as we’ll see Romain Bardet on the top step tomorrow.

I have been very impressed with the Ag2R man’s start to the season; he’s finished in the top 10 of the four one-day races he has completed before Tirreno. That included a gutsy performance in Strade which resulted in a second place but also a strong solo win in the Classic de l’Ardeche. He’s been a frontrunner in Liege before with a 6th place last year and he also won the Peyragudes of the Tour; two examples that he won’t be afraid of the distance. Given his god-awful ability on a time trial bike, he might just be given the leeway to slip away in the closing kilometres.

Thanks as always for reading, who do you think will win tomorrow? Will we see the expected GC showdown or will the break spring a surprise? Anyway,