We got the expected bunch sprint at the end of the day, but the bunch was massively reduced due to a crash at 6.5km to go. As a result, roughly 40-50 guys missed out in the gallop but it was very messy nonetheless with elbows flying all over the place, although they were mainly extending from Sagan.

Zabel delivered Kittel perfectly and the German finally took his first win of the season which also happened to be his first on Italian soil!

Sagan elbowed his way to second with Nizzolo following home in a respectable third place.

It will be difficult to see any of the battling out for the stage tomorrow, although the current World Champ might have different ideas.

A rolling day in the saddle with the predominant focus being the final climb.

There are a few early GPMs to reward the breakaway with some points in the King of the Mountain competition but they are too infrequent to make any serious difference in the peloton. 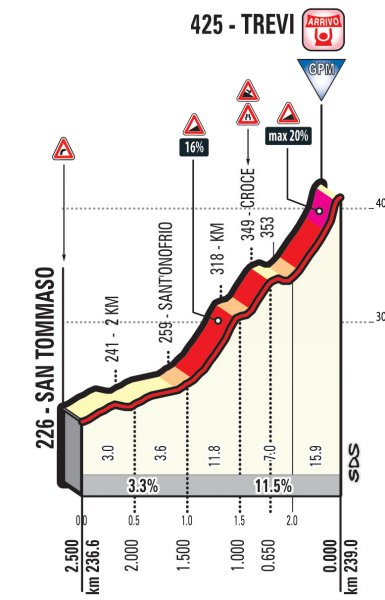 The riders will attack the final ascent twice in the closing 14kms. Short at only 2.5km, the bulk of the climb comes in the final 1.5km although it ramps up in steps. Those final 1.5km average 11.5% but there are plenty of gradients higher, with it peaking out at 20% almost at the summit.

The first ascent crests with just under 12km to go and it could provide a launchpad for a few brave attackers.

With 4km of descent that will work to the advantage of any attackers, the chasers will need to get organised quickly as there are only 5km of flat before the road starts to rise up again.

It could be a very tactical finish!

It really depends on the attitude of Sky.

They have the GC firepower here and they could easily dominate and control the proceedings if they so wish. However, we’ve seen so far in 2018 that they are not afraid to mix things up a bit by going on the attack; Kwiatkowski’s win on the final day of the Algarve is testament to that. We could easily see something similar with Froome/Thomas/Kwiatkowski going on the attack and forcing others to chase.

Another factor to consider is the length of the stage. At a very tiresome 234km it is perfect for those who are wanting to get some practice in before the classics that are coming up. The distance also brings the rainbow jersey into play as he seems to be on a different level compared to most once we hit 220km+. Also it is important to remember he won the really tough and rolling stage into Fermo last year.

Of course it won’t just be Sky who try to make the race as we have numerous strong riders quite far down on the overall either due to a poor TTT or unfortunately being held up after today’s crash.

Ultimately, I think we’ll see an aggressive race with a splinter group forming ahead of the peloton somewhere in the closing 20kms and they will fight out for stage glory in the end. For that group to succeed then it will definitely need representation from Sky but also a few of the other GC teams too, not all though.

So I’m just going to throw a few names into the hat, rather than listing off the 20 odd riders who might have a chance if things go their way.

Desperately unlucky to have lost time in the crash today, he’ll be out tomorrow to try to retake some of those losses. He’s had a bit of racing under his belt already, taking an impressive second place to Valverde on the very steep finish to Cocentaina in Valenciana earlier on in the year. An aggressive rider he should be in the shake up tomorrow.

Probably Sky’s best card to play tomorrow, he’s not afraid of the distance nor the punchy short climbs. In 2018 he’s already managed to win two stages and the GC in Algarve and with MSR just around the corner, he’ll want a good hit out this week after a disappointing Strade Bianche by his standards. As mentioned above, any move that goes will need a Sky rider to succeed. I think anyone up the road will be worried if Kwiatkowski joins them, he’s such a classy bike rider.

Disappointed to have lost as much time in the TTT, the Jumbo rider’s chances of a good overall certainly look low after being held up by the crash today and losing 1’42. This is apparently a race that he was targeting and he is normally a rider that goes well in their targeted events so there is still hope for him to pick up a good result somewhere this week. We’ve seen in the past that he is not afraid to attack and given how far back he is now, that might just grant him some extra freedom. A solid 4th place on the steep Valenciana stage will be a confidence booster in regards to a finish like this.

It really is hard to tell when Felline is going well or not as he often pulls great performances out of the bag when least expecting it. He’s another who lost time today although I’m not sure if he would ever be competing for the overall title but a top 10 could have been a possibility. A brutally strong rider when he needs to be, the short 1.5km steep climb should suit his characteristics well, it is just a case if he has the motivation and form at the moment.

I can hear Carlton Kirby rejoicing from here as his yearly outside candidate for MSR makes my list. The Australian has had a good start to the season with strong showings in Andalucia and Strade. On the short cobbled finish in Andalucia he finished in an impressive 9th place on the stage, only a few seconds behind much more renowned climbers like Soler and Kruijswijk. A punchy rider on his day I could see him attacking with Uran sitting behind and he might just steal something. No doubt you will hear it from Kirby if he does!

It’s a tough one this as we could see many permutations in the final 30kms. However, I think we’ll see a really tough pace up the first ascent of the climb that will greatly reduce the peloton.

There will be a lot of looking around and Primoz Roglic will seize his moment and attack. Far enough behind on GC at the moment, no one will take up the mantle to chase and as we’ve seen in the past; giving him more than 20 seconds usually means it is game over in a situation like this.

Thanks as always for reading! Who do you think will win tomorrow? Will we see any GC shake-up? Anyway,