mytwospokesworth in Tour Down Under, Uncategorized January 19, 2018 1,102 Words

That didn’t disappoint, although I did think the race would be slightly more selective. We saw attacks from many riders throughout the closing 10kms, all of which looked at some point as if they might be “the one”. However, things were eventually brought back together for a super fast sprint into Uraidla, with Sagan showing his raw power by overcoming Impey in the closing 50m. Luis Leon Sanchez rounded out the podium.

That result means the World Champion is in Ochre heading in to the classic Willunga stage. Let’s have a look at what is in store for the riders; this will be brief!

If you’ve watched the Tour Down Under at any point then you’ll know what is coming.

Nothing all day really until we get to the final 25km and the first ascent of Willunga. 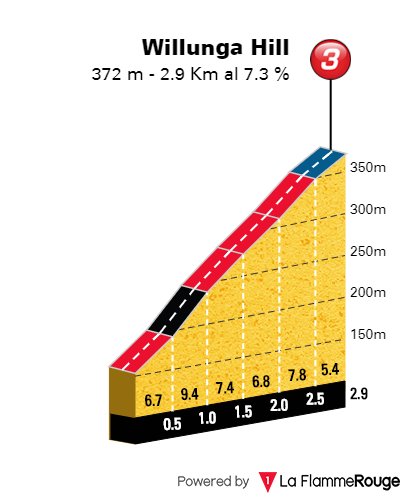 In the grand scheme of things it is not an overly difficult climb but the combination of the heat and the speed they ascend, makes it tougher than it seems.

Porte has flown up here the past few years, normally launching his attack from ~1.2km to go, and fully dropping everyone by the S-bends at ~800m to go. Will we see the same this year?

After the ridiculously hot conditions of the past few days, it will ease in temperature a bit for Willunga. The following is the forecast for nearby Mount Terrible.

There is one thing that has caught my eye though…Look at that wind. I didn’t expect to get the opportunity to speak about the possibility of echelons this early into the season!

They are unlikely, but given we’ve seen some teams try before, I’m hoping that might be the case this year. It all depends on what way the wind ends up blowing.

The 4kms along McMurtie Road could offer a prime opportunity if the wind does come from the south.

Likewise, the same can be said for the 3.5km of Main Road as the riders head directly south for town of Willunga, if the wind has swung round.

With so many riders still close on GC, there are 33 riders within 14 seconds, then I hope we see some aggressive racing early. Leaving it to the last ascent of Willunga really narrows down the list of riders who can win this race overall.

Ideally, I’d love to see a few teams set a very hard pace up Willunga the first time followed quickly by some counter-attacks over the top. This could create some really interesting, tactical racing.

Will we see that though?

I fear not and once again it will be a sprint up Willunga but the headwind will play a big part and we might not see as wide margins as we have in the past.

Can anyone stop Porte?

Probably not, he looked strong on stage 4 and seems as lean as ever going by the pictures floating around social media. However, there are reports that he was suffering from a bit of an illness on Friday, although that didn’t really show the other day! Yet, if that has matured into something worse, then it certainly could be highlighted on Willunga. Porte has attacking spot nailed down; putting in a strong dig at 1.2km and not slowing down until the finish. With the headwind though he might have to hold on until later, meaning his winning gap might not be as big in the end.

From what we’ve seen so far there are a few riders who might go close to the BMC rider.

McCarthy has been consistently strong throughout this race and he impressed me on the climb of Woods Hill in yesterday’s stage. He’s not a pure climber, but given his current form he certainly should be up at the pointy end on Willunga. The headwind is a massive advantage for him as it plays nicely into his good sprint. He’ll hope to finish no more than a few seconds behind Porte if possible, then pick up some bonuses on the final day.

Pozzovivo is lurking and has been climbing to the fore on the few tests we’ve had so far. Bahrain still have three riders close which could play wonderfully into their hands if they attack the race. The Izagirre brothers have been solid too and I really hope we see them go full gas on the first ascent. It will be hard to beat the King of Willunga, but if they can isolate him early then who knows. 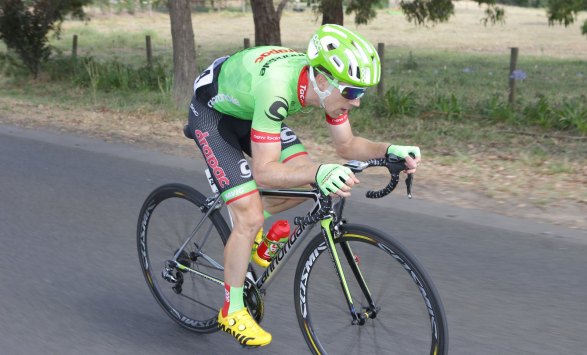 A bit of an outsider, he was one of the standout riders for me yesterday. On the passage of Norton Summit he was very attentive, coming over the crest in third place behind Gerrans and Porte. Then once we got onto Woods Hill he made a move with Gorka Izagirre. That didn’t last too long but he was one of the first to follow when Porte went again later. To me that suggests he’s going well and feeling confident. Completing his first Grand Tour last year will have a positive effect on him this season; will we see that come to fruition on Willunga?

The King will be dethroned!

I was really impressed with the Kiwi on stage 4 and he arguably looked the strongest on Woods Hill Road; a great sign for Willunga. It was a shame that Porte soft-pedalled a few turns when the two of them had got a gap, but it will only make Bennett hungrier to beat the BMC rider on his own turf.

He is a classy rider who took a big step forward last year and I think that upwards trajectory will continue in 2018!

Thanks as always for reading. Apologies that this is a slightly truncated preview but given that it is the same route every year and I’m a bit knackered after the past few days; what can you do?! Who do you think will win on Willunga this year? Can Porte really be dethroned? Can Sagan somehow hold on enough to be in with a chance on Stage 6? Anyway,