mytwospokesworth in Tour Down Under, Uncategorized January 15, 2018 869 Words

The action kicks off today/tonight, depending on where you are watching it from, with the seemingly now common sprint finish into the town of Lyndoch.

Last season saw Caleb Ewan take the win ahead of Van Poppel and Bennett, with the little Aussie also winning the stage in 2016. Can he make it three in a row this time?

Let’s have a look at what is in store for the riders.

A fairly simple day with an early KOM to reward a break rider with a jersey come the end of the stage.

There are a few rises later in the day, but nothing too severe and we should see an almost complete peloton coming into Lyndoch for the second time to compete in a bunch sprint.

The run-in to the line is fairly easy too, with the riders approaching from the south on an almost arrow-straight road. Normally I would post images of roundabouts etc here so you could get a good feel as to what might happen, but there would be no point so I guess I’ll move on!

Oh, the race does finish alongside the Jack Bobridge Track though so who will be raising their arms in ecstasy at the end of the day…

His confidence might be slightly knocked after the People’s Choice Classic but I’m sure it will be more of a driving force for him, rather than something that will be of detriment. Mitchelton got their lead-out slightly wrong on Sunday and will hope to get their timing much better this time round; Impey and Edmondson have a big job to do. Ewan should be ahead of everyone else in terms of form at this time of year and he has to start as the favourite for the stage. Can anyone stop him?

The winner on Sunday, his rivals might be worried for the season ahead already. He is obviously in good shape just now, but it was his race craft that really made the difference in that race; he always seems to follow the right wheel and know when to jump. With Bennett apparently still recovering from illness, Sagan will be Bora’s man for the opener. He’ll have Selig to guide him into position and from there it will be up to him. Time to double up?

It was good to see the Gorilla back in action and looking competitive in the criterium. One of the things that stood out for me on Sunday was that he put his wheels in places where he wouldn’t have when he was low on confidence, nudging Bauhaus out of a gap, he certainly has his fight back. With a solid Lotto Soudal train, he should expect to start his sprint in a good position, leaving it up to him to finish it off. He normally seems to start the season well; winning his first road race the past two years.

With Greipel being the veteran German sprinter at the race, Bauhaus is certainly one of the spearheads of the next wave. A talented rider, he took his first big win last year at the Dauphiné, beating the likes of Demare and Bouhanni. Sunweb have a lot of faith in him and they’re looking for some good results in the sprints this week. Teunissen and Arndt is a small but very potent lead-out train and they’ll look to capitalise on the work of others late on, a la Lampre style circa 2015. Keep an eye out for him this week!

Free from the shackles of Sky and their lack of any major help in the sprints, now at Quickstep the Italian should have more support with Morkov and Sabatini. He was there or thereabouts on Sunday, finishing just off of the podium so I imagine he has some good form; he is another who normally starts the season well. One negative for him is that he does have a habit of losing the wheels at time, but given the simple run in, he should be okay.

There might be some others who get involved but I can’t see them challenging for the win.

Opening stage of the TDU so Ewan wins, simple! 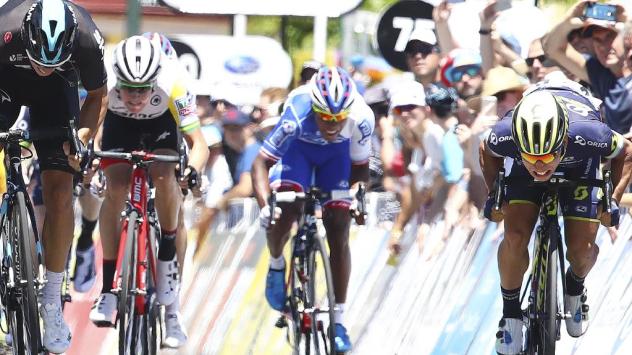 He and the team will want to make amends for Sunday and I’m sure they’ll do just that. They have the fire power to deliver him perfectly. Knowing the finish well should mean that he times his effort perfectly, taking yet another Ochre jersey.

I won’t be backing the Aussie though as he is too short in an open course race for my liking. Instead, I’ll be chasing some EW value and potentially more with the talented young German;

Apolgoies for the shorter than normal preview but there isn’t much to talk about route and tactics wise. Don’t fret though, a 1000+ word-er will no doubt be out tomorrow. 😉

Thanks as always for reading though, and as always any feedback is greatly appreciated. Who do you think will win? Can anyone stop Caleb? Anyway,

mytwospokesworth Final year student at the University of Stirling studying Marketing and Sports, with a passion for professional cycling.
Published January 15, 2018