We’re at that sad time of the year again where the World Championships begin and the season starts to draw to a close. The opening event as per usual, is the “art form” of the team time trial.

In 2016 we saw Quick–Step (then Ettix) power their way around the pan-flat course in Doha amid some searing heat to beat BMC and Orica. A slight surprise given BMC’s dominance in the event throughout the year leading up to the World Champs.

As for the women, Boels continued their incredibly impressive season by blitzing the opposition, beating Canyon by 48 seconds and Cervelo by a shade under 2 minutes. Not bad! 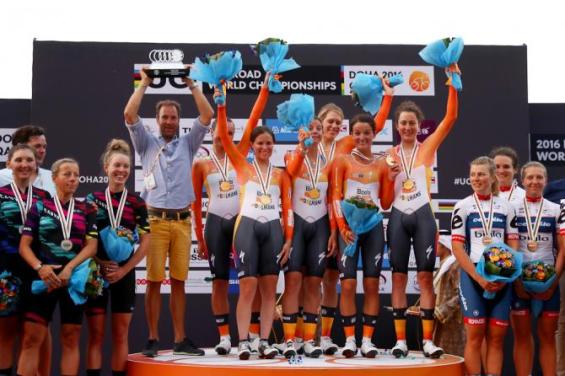 Will we see similar looking podiums this year? Let’s have a look at what is in store for the riders.

Both the men and women will compete over the same course which is fantastic for me, as I don’t have to do double the work for nothing, or just pointlessly repeat myself which would bore you!

https://veloviewer.com/routes/10581357/embedAs is tradition nowadays, I’ve made my own profile for the route that you can hopefully see embedded above…

If not, you can view the interactive version here.

“Appears flat-ish but surprisingly hilly” is how I would describe the route. There are no real severe gradients in the course apart from a few small climbs, but according to the Strava/Veloviewer data there is over 1100m of elevation gain.

I’m going to throw that slightly out of the window though as the app does get a bit confused when tracking through tunnels and over bridges etc, but it won’t be too far off. My estimate would be ~900m of elevation gain; which is still quite a lot for a TTT.

The first test the riders will face is a 1.2km climb at 4.8% that comes just after 3.5km into the day. Not ideal for “easing yourself into it”! The route then rises and falls constantly for the following 7kms as we head towards the second longest suspension bridge in Norway. A poor man’s Forth Road Bridge if you ask me…

Anyway, the first slightly anomaly on the profile comes just after that. The riders do go up a steep ramp, but it is not as sudden as it initially seems. Instead, it is more of a gradual rise through the tunnel, before flattening out.

Yet more undulating terrain follows before the riders face the toughest task of the day.

Averaging 5.4% for 2.2km isn’t crazy, but that includes the more shallow build up in the overall total. The main bulk of the climbing is actually done over 1.1km…

It’s a bit more difficult than the 1.4km at 7.2% that is suggested on the official profile.

The steepness of the slopes could certainly ruin the cohesion in a team and potentially ruin their chances at they head into the final section of the race.

Once over the climb, the riders will have some more rolling roads to contend with but they are mainly in their favour now, with the parcours descending ever so slightly all the way into Bergen.

The usual teams arrive here with strong aspirations in this event so let’s start with the reigning champions.

They bring a very solid all round squad with them here and they’ll once again be challenging for the title. It will be interesting to see what order they rotate in and who they intend to drop as the race progresses. I imagine Vermote probably won’t be there at the finish line! With all that said, I just can’t see them winning it this year.

The dominant force in TTTs for so long, they’re undefeated this season. Yet, this route is arguably the least favourable that they will have faced all year. With them in Bergen they do have a lot of strong guys who are more than competent climbers such as van Garderen and Dennis, and I wouldn’t be surprised if they did win. Yet, looking at their squad, you just don’t get the same “fear factor” that was there in previous years. They are beatable.

Somewhat of a surprise package that took third place at the Vuelta this year; they’ve made some steady progress throughout the season. In fact, I’d go as far to argue that they have been one of, if not, the best performing teams in 2017. I really like the look of their squad that they bring here and it is very well-balanced. Dumoulin will obviously be heavily relied on but their not exactly short of talent to back him up. Watch out for them!

I wonder if Moscon can just drag the other 5 around with him? With the way he was riding in the last week of the Vuelta, it wouldn’t surprise me! Not exceptional in the discipline recently, Sky are more likely to be remembered for their exploding wheels at Tirreno this season compared to any of their on the bike TTT performances. However, their squad is stacked with strong riders who can handle this terrain. If there is ever a TTT WC Sky could win, this is it.

I can’t really see past any of those 4 squads winning. Orica should be fighting it out for a top 5 with Jumbo, with Movistar not too far behind.

There you go, there’s your preview…

Joking aside, the Dutch outfit should have this one in the bag to make it back-to-back titles. They lost some of their TT prowess at the end of last year with Van Dijk moving to Sunweb and Stevens retiring. To replace them they did recruit van der Breggen and Pieters; not a bad swap! The rolling course could cause some difficulties but given everyone in their line-up is a solid climber, then it shouldn’t be too stressful for them. It will take some bad luck for them not to retain their crown, or a crazily strong ride from some opposition teams!

The up-and-coming TTT team in the women’s peloton, they are Boels’ nearest challengers in my opinion. At the recent Vargarda TTT they finished only 13 seconds behind the Dutch outfit over a similar distance. The route tomorrow is hillier, which probably doesn’t favour their squad as a whole. Nonetheless, with the likes of Ludwig, Moolman and Lepistö, they certainly have some firepower in their ranks!

The “old guard” of women’s TTT racing. In previous incarnations they were almost unstoppable in this event, but they have since lost their ways. The squad that they bring with them here gives me a similar feeling to QuickStep. They are strong, don’t get me wrong, but I just don’t see them having enough to challenge Boels and in fact, I think they’ll cede their silver place to Cervelo this year.

Sunweb and Veloconcept will be battling it out for 4th, hoping that another team has a bad day so that they can win a medal!

There are a couple of fantasy games for the World Champs that I’m going to plug.

First of all is the return of Cycling Picks/Rainbow Picks, which will be free to play this time around. That doesn’t mean there isn’t any prizes though, as the lovely people @handmadecyclist are offering one of their WC mugs for the winner!

Follow Jason (Cycling_Picks) to get involved, or simply enter your name on the spreadsheet that can be found here. All rules etc are viewable on the sheet etc, or if you’re still unsure how it works, get in contact with Jason!

Secondly, @InsidePeloton96 is going to be running a World Champs “Fantasy Fives” that I’m sure he’ll be releasing over the coming days which you should also get involved with. I say that, as I had to curate the price list for the women’s side of the game. You might find a few bargains hidden in there…

I wonder if we can parody Mr Blue Sky, a.k.a Mr Boels Sky?

Sunweb and BMC to make up the podium, with Cervelo and Canyon doing the same in the women’s race.

Nothing really excites me for the outright markets, so I’ve went for a H2H 5-fold for some entertainment over the afternoon.

The odds have now shortened quite a bit since yesterday evening, but I’d still back it at the 9.45/1 available. 1.5pt WIN.

Thanks as always for reading the preview! Who do you think is going to win the TTTs? Will we see a shock result? The next preview I’ll be releasing is the Women’s ITT so please return for that. Anyway,

mytwospokesworth Final year student at the University of Stirling studying Marketing and Sports, with a passion for professional cycling.
Published September 16, 2017