What a Vuelta the Lotto old-boys are having!

It took a while for the break to go but once it was up the road, that was it gone for the day. Sky mobbed the front of the peloton and no-one seemed overly keen to chase.

In the end, it was a duel between Armée and Lutsenko on the final climb, with the Belgian taking his first pro win. Not bad for someone who is 31 years old. Maybe age just is a number after all?! Visconti sprinted up the final hill to round out the day’s podium. 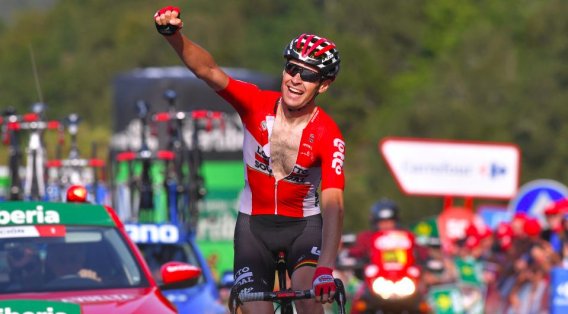 There were some GC gaps behind, but nothing too crazy. Lopez being the worst off out of the top 10, losing 37 seconds to Froome.

With only the Angliru left of any major danger, it does look like the Brit has the GC race sewn up.

Unless of course we see any bold attacks tomorrow. Speaking of which, let’s take a look at what is in store for the riders.

If today’s stage was close to 100% ideal territory for a breakaway, tomorrow’s parcours hits the full house!

Too tough for any sprinters team to control, not really difficult enough for the GC contenders to make their mark.

The peloton will descend from the gun almost and it is most likely that we’ll see our break of the day formed on the Cat-1 Alto de la Colladona.

A fairly hard start to the day, especially when the first kilometre of the climb is false-flat and makes the average gradient a bit shallower!

Expect only fresh riders and good climbers to make the break if it does go here. Although unlikely, I wonder if we’ll see any early GC attacks. I live in hope…

The second of those climbs is obviously steep, but it comes awkwardly positioned in the stage and it really shouldn’t be of any major impact to the day’s events.

However, the same can’t be said for the final climb of Alto de San Martin de Huerces…

Short and steep, this could be a flash point for both the breakaway and the GC riders. The steep gradients will be a real grind and with almost three weeks of racing in the legs, some might surprisingly struggle.

Cresting with just 15km to go, if a rider has 15-20 seconds over the top then they should make it all the way to the finish line.

The descent into Gijón does have a few tricky turns but it isn’t overly technical. The downhill turns to flat at roughly 4km to go as the riders make their way through the outskirts of the town before finishing along the beachfront.

It is a fairly short stage, so there is a chance that some of the GC teams might try to keep things together and cause some chaos but with Angliru looming and Froome looking solid, that is very unlikely.

So here we are, yet again, playing everyone’s favourite sweepstakes.

I’m tempted to treat myself to 5 names today. How exciting…

To make the break, assuming it goes on the opening Cat-1, a rider will have to be fresh or a good climber. The two of those seem to go almost hand in hand at the back end of a Grand Tour but there are room for some surprises.

The Belgian breakaway expert has been fairly quiet as of late in this race, not making as many moves as would be expected of him. Is fatigue setting in, or has he been saving himself for one last dig? He produced a good TT on Stage 16, finishing in the top 20 that day so there must be some form there. At the Tour he made the winning move on Stage 19, can he repeat that tomorrow? I think so.

A new name for the list and possibly an unusual one. It took a lot for me not to use the expected pun there! Nonetheless, the young Norwegian is a talented rider who took his first pro win earlier this year. A strong climber, he finished fairly well on today’s stage after sticking with the GC group for a lot of the day, coming in just behind Lopez and ahead of Van Garderen and Chaves. Can he turn those good climbing legs into a result tomorrow? Let’s hope he makes the break and we’ll find out.

He seems to have recovered from the illness that was hampering him a few days ago, as he was in the second group that returned to the GC favourites once the pace had slowed. It depends if the team give him the OK to go and hunt the break because there is a chance he might have to work for Kelderman. If he does make the move, he has the explosiveness to go well on the final climb of the day. I wouldn’t want to take him to a small sprint, that’s for sure.

The Irishman said pre-stage today that he would try something. Unfortunately that didn’t come to fruition and he missed the break. I’m sure he’ll be gunning for it tomorrow as the finish looks ideal for him. On a 4km climb like that he should be able to follow most who are up ahead and if he descends like he did on stage 10, then he could easily get a gap on the downhill. Enough to take the win? Quite possibly!

Everyone’s favourite young Russian climber. Wait, he isn’t? Just @padsbets and I it is then! Mamykin was strong today in aid of Zakarin and was one of the driving forces behind that impromptu Katusha team time trial. He might be rewarded tomorrow with the freedom of going on the attack. At this point in the race with riders form all over the place, it might be the perfect time for him to also take his first pro win. It seems to be the done thing nowadays!

Much the same as the past few days;

Choose a random GC guy and hope they come home near the front of the bunch. I assume we’ll see some attacks on the final climb so it should be the case.

He’ll be your favourite Russian climber too!

Break to stay away and Søren Kragh Andersen to take the win!

As it’s unlikely I’ll be backing anything on Angliru, this could be one of the last days of punting so I’m treating myself.