The break stayed away to the end today, but it was only one man who survived out in front ahead of the GC battle behind.

Aqua Blue’s Denifl lit up the final climb of the day, taking the Irish outfit’s first Grand Tour stage win. Not a bad start to their first year as a team!

The Austrian produced a great performance and didn’t lose too much of his starting gap. In fact, he actually gained time on some of the GC guys.

Behind, Contador attacked and forged on ahead, finishing second on the day. A group 4 then came in led by Lopez 36 seconds down on the Spaniard. Followed not so far behind from Woods and Kelderman. However, Froome was the worst off of the GC contenders today, shipping 1’18 to Contador and 42 seconds to Nibali and co.

It leaves the GC battle somewhat back on as the Shark closes to 1’16 on the current leader. However, the following few stages aren’t too difficult so it could all come down to a big battle on the Angliru.

Yet, with Contador in his current mood, who knows what might happen.

Let’s take a look at what is in store for the riders tomorrow.

Normally at this point in the race, tomorrow’s route would be an ideal breakaway day.

The stage starts off with some undulating terrain but nothing too serious for the riders although they will have to tackle a few 2-3km climbs at low percentages.

Tomorrow is all about the closing 65km. 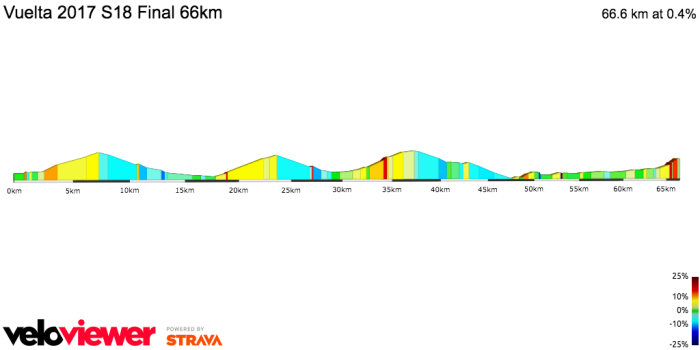 The riders will face 2 Cat-3s, 1 Cat-2 and a Cat-3 finish all in that closing 65km. It certainly could be tough enough to entice some GC men into audacious attacks.

The first of the climbs is Collada de Carmona.

As you can see, at average of 7.1% for 4.7km it isn’t exactly easy and if attacked at a fast pace then the peloton could be reduced quite drastically here. It does peak at 10% at points, but the “steady” gradients should suit Sky and Froome.

The riders will then descend for just over 10km before they start heading back towards the heavens again.

Collada de Ozalba is of a similar gradient to the previous Carmona but is 1km longer and a lot more irregular. A classic Vuelta Cat-3 you might say that averages 7% for 5.7km. Would be a 2xHC climb at the Tour of Britain! The punchy gradients certainly suit a certain Spaniard who looked lively today. I wonder if this is where we’ll see an early attack?

A shorter descent this time of 6kms follows before the only Cat-2 of the day, which stats wise, is actually the easier of the three. 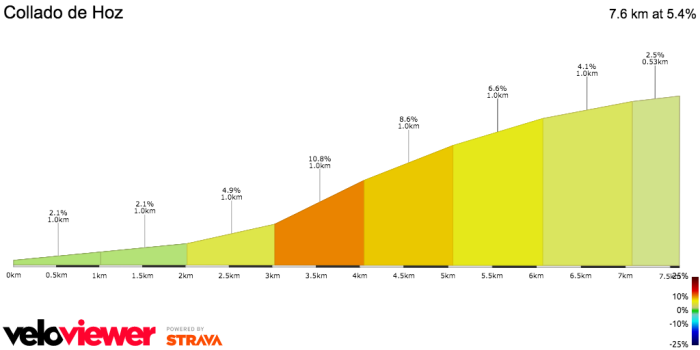 Averaging 5.4% for 7.6km is easy for these guys, but that figure is distorted somewhat by the almost 2km of false flat right at the start and the 500m at the end. The 2kms at 9.7% are certainly steep enough for riders to attack and drop their rivals. Will anyone try?

The only issue with doing so is that once they are over the summit of the climb then they still have 29km left in the day.

You’ll certainly need some strong team-mates up ahead to drop back and drag you along the valley roads until the final kicker. 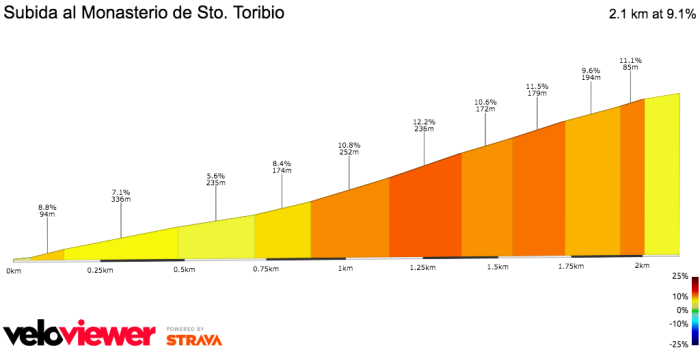 Another couple of kilometres at just over 9%, it will be interesting to see how the riders will cope if the last 60km have been raced aggressively. In theory the time gaps should not be massive, but you never know; this Vuelta has been fast and there is certainly some fatigue in the legs of the GC guys.

On paper this has break written all over it, but after today’s escapades I’m not so sure.

Froome looked tired, but he did well to somewhat limit his losses. We’ve seen this from him before and he comes out fighting the next day. The one saving grace for him is that his Team was strong today. He had 5 riders supporting him going onto the final climb and if they are in the same position tomorrow, he should be ok.

Yet, Sky have done a lot of work throughout this race and that is bound to catch up with them at some point. If they show any weakness tomorrow, then Froome could be exposed.

The closing 66km look as if they’re almost straight out of a hilly one-day race. I heard Nibali is not too bad at those!

I expect to see Astana/Bahrain/Trek/Katusha all attempt to put the pressure onto Sky tomorrow by setting a fast pace on the run in to the first of the climbs, almost testing the water so to say. If they manage to put them into trouble then they’ll continue on. If not, they’ll wait until the final climb and hope their GC rider can gain some more seconds back then.

So will that all happen at the front of the race, or behind the break?!

I really don’t know to be honest.

Either way, teams will want to send riders up the road so that they can work for the team leader in the final valley. Therefore, we’ll see another big fight to get into the move.

Sky will probably once again call the bluff of the other teams and let the gap grow so at that point we’ll know who is interested in the stage if they start chasing.

I’m leaning towards to situations.

If we get GC chaos and attacks on the first climb, then the break has no chance. But, if it doesn’t happen until the penultimate climb of the day, Collado de Hoz, then the break should have enough of a gap left and favourable terrain to take the win.

As much as I hope for some aggressive racing in the bunch, I think Sky will be strong enough to neutralise any early moves so we’ll see the break hold on to fight for stage victory.

Names in a hat time again! After naming all of the riders of over the past few weeks, I am not going to explain my reason for choosing them this time round in massive depth.

Good climber, solid on the flat. Certainly capable of winning on the steep final climb.

Great performance in the TT so form is clearly there. Might not find the last climb great, so an early attack could work for him.

Much the same as Mas, the Spaniard is good on the flat but much more proficient at going up hills. Movistar really need something out of this race.

Already won a stage this Vuelta but he has been a bit quiet since then. Had a tumble today but seems okay. He can certainly put out the power when required and could be an outsider if he makes the move.

Another tricky day for those near the top of the table with the potential breakaway day. Like always though, on an uphill finish choosing a GC rider is the sensible idea.

Looked strong today and should be up near the front again tomorrow.

Double stage winner on the cards for the top-tube descender?

The Lotto youngster is bound to be fatigued by now!

Even now, I’m still not 100% sure as to how the stage will go and I’ve changed my mind several times since writing the above sections.

It really depends on the attitude of the 4 main teams and how weak/strong Sky look on the opening climb. There is no point Astana/Bahrain etc burning matches on a day where they aren’t going to make any inroads on Froome if Sky are strong. Instead, letting the British team do some work and tire them out for future days.

But, I think we could see Sky falter and an unexpected GC day…

Contador to get that stage win his has been longing!

Thanks as always for reading. Who do you think will win tomorrow? Will we see Contador and co go early or will the break survive? Anyway,