Those going out early were treated to a damp course with a little bit of rain but they missed the deluge that followed later on. Küng took advantage of this and delivered a phenomenal performance, beating Bodnar by 4 seconds and Dumoulin by 5. 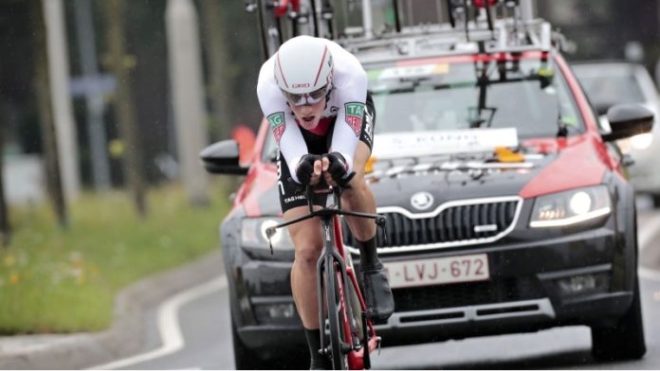 Sütterlin and Sagan put in good performances late in the day but it wasn’t enough to break into the top 10 on the day. Nonetheless, the World Champion now sits 15 seconds back behind Küng on GC, still very much within striking distance. Another metaphorical head-nod of appreciation has to go to Kragh Andersen. He needs a big week if Dumoulin wants to win the title and him being high up on GC is of great help!

Right, let’s have a look at what’s in store for the riders tomorrow.

Another sprint day with the now traditional finish in Ardooie.

With the golden kilometre being positioned only 23kms from the finish, it will be interesting to see if any of the teams bring the breakaway back so that their rider can duke it out for bonus seconds. I think that’s unlikely to happen though if I’m honest.

We won’t see much action until the final few kilometres but those last 10km will be very hectic as everyone jostles for position.

The reason being so is that we have a technical section just before the Flamme Rouge.

Being first into the left-hand turn at 1.4km to go allows your team to dictate the pace going through the chicane that finishes at roughly 1km left. Due to the three tight turns in a short space of time, the bunch normally slows down quite a bit, while also stretching out into a long line.

You don’t have to be right at the front of the peloton at 1km to go to win the stage, but being in the top 10-12 riders is almost a necessity. Winning from any further back is tough as it takes a lot of energy to move up the bunch.

Ideally, a team would have 3 riders in front of their sprinter as they exit the chicane. This would allow them to keep the pace high enough all the way to the line and make it really hard for anyone far back to challenge. It could be done with two, but it is a very tough ask. We’ve seen this in previous finishes with Etixx (2015) and Trek (2014) where they look promising but run out of gas early and get a bit swamped. It was only Boonen’s tactical awareness that won him it in 2015.

Last year saw the break almost make it to the line but they were caught in the closing hundred metres. Out of nowhere, Sagan weaved his way through the pack to claim victory. An incredible bit of bike handling.

Will we see something similar this year?

Won this stage last year with some great bike handling. Won the opening stage thanks to some good bike handling. Same again tomorrow? He’s clearly on great form just now and will no doubt find himself positioned well going into the final few hundred metres. The one concern is that his lead-out isn’t great so he might have to come from far back. He did win Stage 1 with a great tactical stall in the finale, but I don’t think he’ll be able to pull that stunt again. He will be up there fighting for the win, but certainly beatable!

Got away with murder in the Tour in terms of poor positioning and that really came back to haunt him on Stage 1. His team need to sort it out for tomorrow otherwise he’ll miss-out again. If they do, then obviously he has a great chance given his speed. I’m just not confident in their ability to get it correct this time!

He has a good record here and a strong lead-out train dedicated to help him get a stage win. Although that didn’t really help on Stage 1 as he ended up in a bad position. His sprint was a bit “meh” too, but on his return to racing after the Tour it was much better than some. An aggressive sprinter in terms of his risk taking, he should be up there tomorrow fighting for the win.

Oh so close on the opening day, he just needs to work on his bike throw! It’s good to see him take another step up this year. He has a solid short lead-out in Teunissen and Curvers, but his chance to challenge for the stage win depends on how much is team risks using Dumoulin and Andersen. If they take the trio into the final 2kms then he has a good chance of another result. If not, he might get swamped.

The rider with the best lead-out here he has a great chance tomorrow. Orica were looking good on the opening day until they got bullied into the gutter by Lotto Soudal. I don’t expect that to happen tomorrow and they could well string it out in the final few kilometres. Will the Dane be able to finish it off? He is certainly in good form just now!

A case of a strong lead-out for the German but not an ideal finish for him. He has won here in the past, but his ability to corner aggressively with the fast men has been to his detriment as of late. I can’t really see that changing tomorrow.

I think Sky will go with the Italian tomorrow now that he’s had a couple of days of “rest” after the Euros. Their team is actually very strong in the lead-out department with a lot of fast, strong guys. Stannard -> Dibben -> Wisniowski -> Doull -> Van Poppel -> Viviani, not bad! Although they might put Van Poppel earlier as a good sprinter doesn’t always make a good last man. Nonetheless, I think Sky are the team who could challenge Orica to take control in the closing kilometres. If Doull is still left to take his turn just as they come out of the chicane, then Viviani has a great chance.

He didn’t sprint on the opening day after coming back from the Euros, instead letting Boy Van Poppel have a go. I imagine Trek will return to their Belgian for tomorrow though with BVP on lead-out duties. After today’s stage Theuns said that he took it cautiously in the rain, but his legs felt strong. With a few good TT engines in their squad, they could be the surprise package!

Of course there are other guys who could be involved to but I’m not going to make my list incredibly extensive!

Sky to get it right tomorrow and Viviani to make up for his disappointment on Sunday! 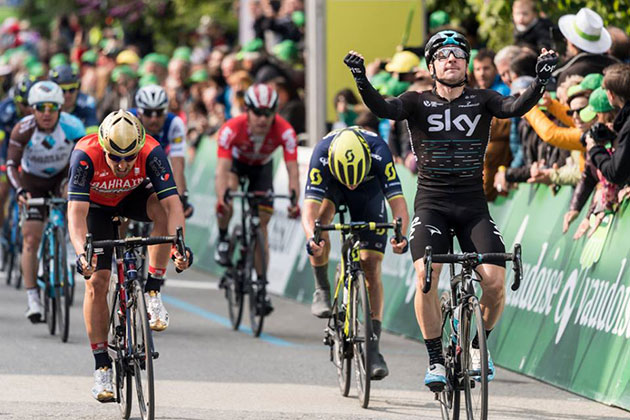 Theuns to sneak onto the podium somewhere.

Thanks as always for reading,